The impact of a failed state in Lebanon on Israel 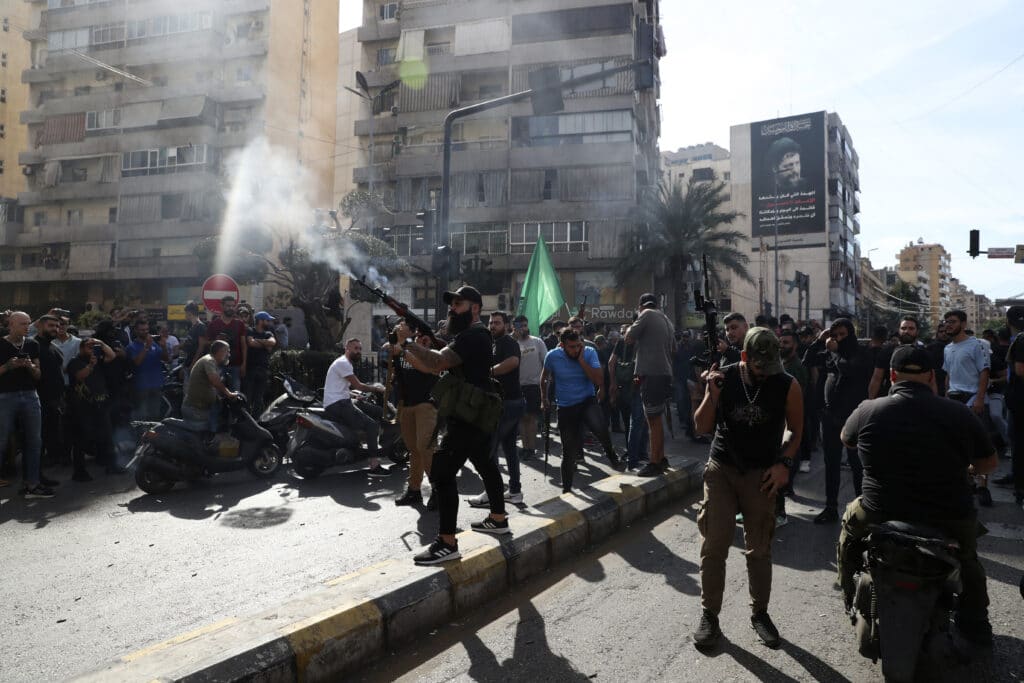 The impact of a failed state in Lebanon on Israel

On September 10, Najib Miqati was able to form a government in Lebanon, 13 months after the Beirut port explosion killed hundreds and injured several thousands of Lebanese and prompted the resignation of former Prime Minister Diab’s government. With only a caretaker government in place, the past year saw Lebanon’s economic and political crises spiral out of control. As Miqati’s government takes power in Beirut, the world is watching to see whether Miqati and his ministers will manage to tackle the biggest problems facing the country in decades, among them historic inflation and an acute energy shortage, or simply continue the dysfunctional status quo. Last week’s eruption of violence between supporters of Hezbollah and the Christian Lebanese Forces Party was a warning sign of what could happen if the situation spirals out of control, as Hezbollah Secretary General Nasrallah warned today his organization has 100,000 trained fighters ready for any mission. Israel, Lebanon’s neighbor to the south, is becoming increasingly concerned over the possibility it will have a failed and chaotic Lebanese state at its northern border, leading potentially to greater Iranian involvement, with Hezbollah taking control,

The negative economic indicators, the acute food and energy shortages, the failed banking system and the struggling healthcare and education systems are already showing Lebanon is on the verge of becoming a failed state, with some experts arguing it already fits the criteria of a failed state. Lebanon’s importance extends beyond its borders and its instability negatively impacts the rest of the Middle East and the East of the Mediterranean Sea, as the repercussions of a failed Lebanese state will not only be felt by its immediate neighbors Syria and Israel but will also make the Levant more vulnerable and exposed to threats emanating from Iran and its proxies.

A failed state will not only mean domestic chaos, but also a flow of refugees leaving Lebanon for Cyprus and other countries in Southern Europe, while others flee to border areas, potentially leading to a humanitarian crisis. The U.S and France do not want to see this happen and will therefore devote great efforts to prevent a collapse of the Lebanese state. Interestingly, Iran and Hezbollah do not want this scenario to materialize either. Recent Iranian fuel shipments to Lebanon via Syria are designed to help bolster Hizbollah’s standing inside Lebanon, but Iran and Hezbollah are not publicly criticizing plans by Egypt and Jordan (supported by the Biden Administration) to provide Lebanon natural gas and electricity, as some of the energy supplies are bound to have an Israeli component of indirect Israeli involvement in them.

In diplomatic channels, senior Israeli officials have been expressing their growing concern over the deterioration of the situation in Lebanon, noting that another failed state on Israel’s doorstep (in addition to Syria) is a negative development. It is not only the fear of a potential humanitarian crisis on the Lebanese-Israeli border, but also a realization that in a failed state scenario there will be no political vacuum, and the actors that will most likely take advantage of the situation are Iran and Hezbollah.

Iran-backed Hezbollah has already been described as “a state within a state” in Lebanon, with a force of over 30,000 fighters, possessing over 100,000 rockets and missiles, with vast (although declining) economic assets and a wide social welfare and education network. Since the last confrontation between Israel and Hezbollah (aka the Second Lebanon War) in 2006, the Shiite militant group has been deterred, and does not seem to be interested in another full-scale war with Israel. In a failed state scenario, Hezbollah may be pushed however by Iran to adopt a more provocative approach toward Israel.  Visiting Beirut on October 8, new Iranian Foreign Minister Amir Abdollahian stated Iran stands by Lebanon, is helping and is ready to provide additional financial and energy assistance, attaches great importance to Lebanon in its foreign policy and supports Lebanese resistance in face of the “Zionist regime”. Notwithstanding, Israeli officials assess that at this stage Iran and Hezbollah do not want to see Lebanon become a failed state, as it will place the burden of responsibility, as well as the blame, on their shoulders.

Israel would like to see a stable Lebanon, where Iran and Hezbollah will be kept at bay. In this context, Israel has agreed to the resumption of U.S-sponsored negotiations with Lebanon over the delineation of the Israeli-Lebanese maritime boundary. If asked to support the regional US-backed plan to provide Lebanon with natural gas and electricity (from Egypt and Jordan via Syria) Israel will most likely agree to do so.

One month after being sworn in and winning the Lebanese parliament’s vote of confidence, the Miqati government faces tremendous domestic challenges, as exemplified by the recent power grid crisis. While Lebanon’s problems are a product of two decades of failed government policies, mismanagement and corruption, the depth of Lebanon’s current crises means that the status quo sustained by previous Lebanese governments will not be good enough going forward. PM Miqati has pledged to end the fuel crisis and restart talks with the IMF aimed to provide a lifeline for the Lebanese economy, yet it is too early to assess whether his government will be able to deal effectively with the crises or just manage to alleviate some of the economic and societal pressures until parliamentary elections in spring 2022. Israel does not want another war on its northern border and is exercising restraint, while expecting the international community, mainly the US and France, to take the necessary steps to ensure Lebanon’s recovery. Nevertheless, if it will feel its red lines are crossed and its security jeopardized Israel will not hesitate to take action to deal with these threats.  More by the Author