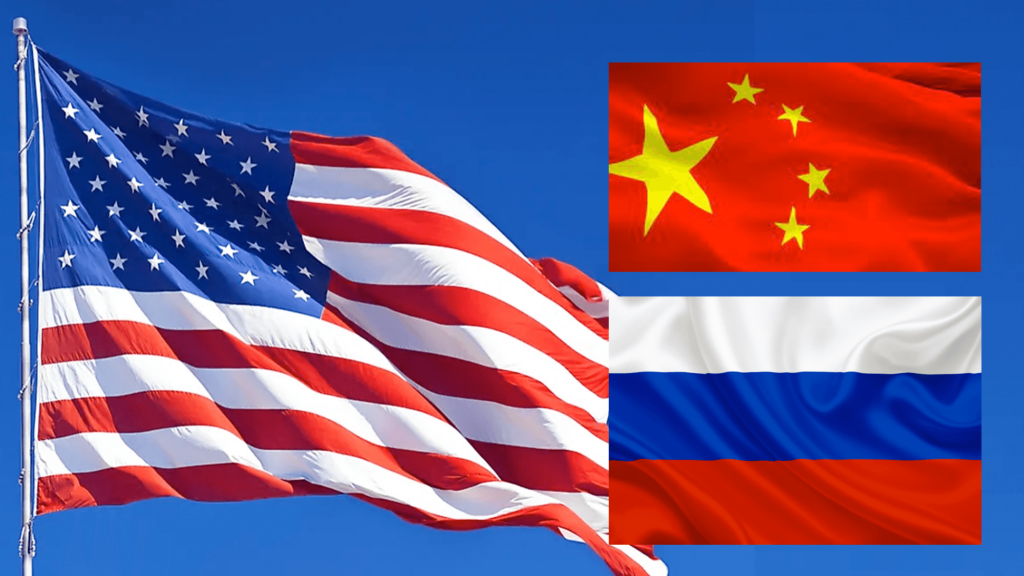 The enduring illegal and terrorist invasion of the sovereign state of Ukraine by the Russian Federation in 2014 and the People’s Republic of China’s equally illegal and terrorist expansion in Asia and elsewhere have given the lie to most Western intellectuals’ claim that if both would accept even a rudimentary form of capitalism they would also surely become more democratic.  In reality, despite the halting westernization attempts undertaken by Gorbachev, Yeltsin, as well as Putin, and successive Chinese leaders since the death of Mao Zedong, both states, are still radically incompatible in their political culture, mentality, customs, and institutions with the West in general and the United States of America in particular.  To wit, they also remain separated from the Free World by NATO, the European Union as well as multiple unfriendly alliances in Asia, Africa, and South America.

As a result, up to now, both states have taken only a secondary role in world affairs.  Hence Presidents Putin’s and Xi’s coordinated call for new world order, in which presumably their states would play the leading role.  Taking advantage of the many institutional weaknesses of the European Union caused by the poorly thought out expansion in the new decade of the twenty-first century, the Russian Federation has started to seize territories of the former Soviet Union in the eastern part of the continent.  Corresponding to this dangerous situation, the present tyrant in the Kremlin is a born chauvinistic megalomaniac with a mentally sick temperament.

In Asia, President Xi Jinping is infused with dictatorial powers, but at the same time, has been hamstrung by a host of Confucian traditions and rivalizing local cum state interests as well as opinions, which he can only ignore at his peril.  In this context, he is bound to take into account the wishes of the party and military bureaucracies, the thoughts of the local potentats as well as the guardians of the spirit of the 1949 coup d’etat.  To appease all these divergent interests, he has embarked on an aggressive maritime expansion, including the threat of a global invasion of the Republic of China.  To show off his tyrannical side, he has been fighting the bureaucracies by ruthlessly clamping down on his country’s lethal corruption.  Thus, his reign since 2013 has been characterized by a confusing cavalcade of internal and foreign contradictions.  To summarize President Putin’s and President Xi’s political conditions, they are collectively compromised by their powers stained with the blood of the joint tyrannical past, their domestic as well as foreign political and military strategic shenanigans and tactical intrigues.  These contradictory attributes – the uncompromising tyrant and the duplicitous coward – have never been separated throughout their bloody reigns.

Meanwhile, in the United States of America, single issue minority movements have been laboring aggressively on enforcement of false realities.  Under the banner of “Political Correctness” cum “Multiculturalism”, allegedly fighting against “White Supremacy”, “Exploitative Capitalism” and “Evil Democracy”, they have brought pervasive hatred and senseless violence across the nation.  Their idiotic pseudo-intellectual sociopolitical garbage have merely generated untold catastrophes and individual tragedies inside and outside the Union.  Moreover, their inability to comprehend realities has been heightened by the failed ideologies of Marx, Stalin as well as Mao.  In this manner, they all have divorced themselves from common sense and have become sheep-like slaves of a nonexistent should be future with a victim mentality.  The election in 2020 of a president in the advanced stages of hopeless dementia, has only exacerbated their friend versus foe psychopathologies.  Finally, the social media’s immoral manipulations of good versus evil phenomena have resulted in a sickening distortion of innocent versus guilt notions, in which these minority movements hunt for everybody who questions the absolute truthfulness of their inferiority complex driven unrealities.  Unless it stopped decisively, this extremely dangerous fake herd ideology could destroy Western civilization with its absolute hostility to the core principles of individual liberty and burgeoning prosperity.  Coupled with the Democrat Party’s “Open Borders” lawlessness, in which the overwhelming majority of illegal immigrants reject assimilation because of their loyalty to their native culture, lack of views on free speech as well as tolerance for other persons’ opinions, they too contribute mightily to the growth of the fallacious myth of victimhood.  In this tragic society of misguided illusions, normalcy is thrown out of the window and exiled to the massive garbage heap of the real world.  More importantly, since a prohibitively large percentage of those semi-educated people tend to work in the federal cum state bureaucracies, in education and the media, their unmitigated lust for power and money will assure the maintenance of a well-nourished vicious circle of abominable hatred and manipulative lies.

Clearly, the world resembles a rudderless ship without a competent captain.  Similar to Plato’s Ship of State metaphor, today’s political leaders across the globe are like the ship-owner who knows nothing about directing a sailboat.  Underneath him, his underlings are equally uneducated about the profession of navigation.  Yet, they prevent the skilled navigators from taking command of the sailboat.  Appallingly, the world’s only superpower has been missing from the global stage since the end of the Reagan presidency.  Because of that, the world has become an extremely dangerous theater of political rivalries by incompetent but power-hungry so-called politicians.  Meanwhile, Russia and China have become the epicenters of complex aggressions where all the elements of state terrorism are present.  Europe has become a tangled mess.  Asia is gearing up for multiple confrontations among its great powers.  The Greater Middle East will remain snarled in tribal, religious and political rivalries.  Africa seemingly cannot escape from its indigineous as well as colonial miseries.  The states of Central and South America are stock in the twisted threads of their history and the peoples’ desire for a better life.  No doubt that the world cries out for leadership.  Restoring America’s greatness must be an urgent priority.  To accomplish that, the people need to wise up and elect competent leaders who could act decisively to restore sanity to public life throughout the Union and