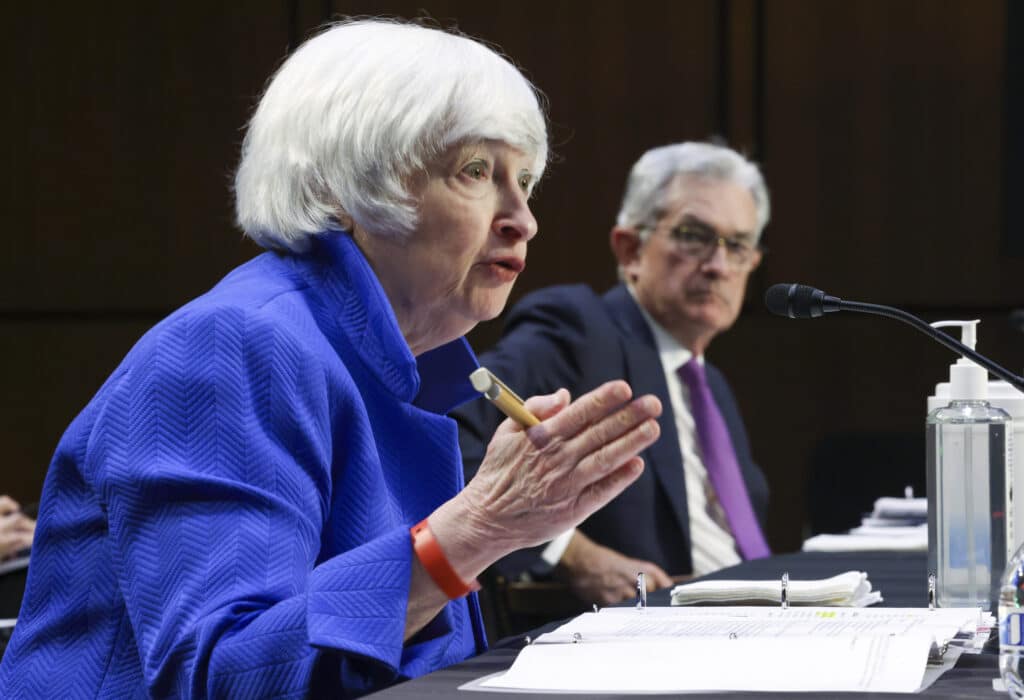 Concerned about what could happen to the economy, Treasury Secretary Janet Yellen told Congress they need to raise the debt limit immediately. She said it needs to be done by October 18. The Associated Press has the story:

WASHINGTON (AP) — Treasury Secretary Janet Yellen sounded an urgent call Tuesday for Congress to raise the government’s borrowing limit, a day after Senate Republicans blocked consideration of a bill that would have done so.

If the debt limit isn’t raised by Oct. 18, Yellen warned, “the full faith and credit of the United States would be impaired, and our country would likely face a financial crisis and economic recession.” Yellen testified before the Senate Banking Committee at a hearing to update Congress on the impact of the vast financial support programs the government enacted during the pandemic.

Yellen also said that a failure to raise the debt ceiling would likely send interest rates higher and swell the government’s interest payments on the national debt.

The debt limit caps the amount of money the government can borrow. Still, Congress is able to approve new borrowing that exceeds the debt limit, with a vote on raising or suspending the debt limit held separately. In that way, the debt limit is raised to accommodate previous spending and taxing decisions. The limit has been raised or suspended nearly 80 times since 1960. It was suspended three times during the Trump administration.

In a separate letter Yellen sent Tuesday to congressional leaders, she reinforced her assertion that a prolonged battle over raising the limit could imperil the economy.

“Waiting until the last minute,” the Treasury secretary wrote, “can cause serious harm to business and consumer confidence, raise borrowing costs for taxpayers, and negatively impact the credit rating of the United States for years to come.”

Senate Republicans on the Banking Committee argued that Democrats could use their majorities in the House and Senate to increase the debt limit on their own, using special procedures in the Senate to avoid a filibuster.

“You just want Republican fingerprints on the Democrats’ efforts to tax, spend and regulate the United States into Europe,” said Sen. John Kennedy, a Republican from Louisiana.

Separately, Warren said she would oppose a second four-year term for Powell, who has not yet been re-nominated by President Joe Biden. She argued that Powell has weakened financial regulations that were enacted after the 2008 financial crisis.

“Over and over, you have acted to make our banking system less safe,” Warren said. “And that makes you a dangerous man to head up the Fed, and that’s why I will oppose your renomination.”

Some progressive activists have pushed the Biden administration to replace Powell, because of his record on financial deregulation and what they see as his insufficient commitment to incorporating climate change in the Fed’s regulatory policies.

Under questioning, Powell also said for the first time that the Fed is examining financial trades by former Boston Federal Reserve Bank President Eric Rosengren and former Dallas Fed President Robert Kaplan to see if they have broken the law. Both Rosengren and Kaplan resigned Monday.

Kaplan traded millions of dollars in stock last year, while Rosengren also traded stocks and invested in funds that were buying mortgage-backed bonds, which the Fed was also purchasing as part of its efforts to hold down interest rates.

Both trades occurred while the Fed cut its benchmark interest rate to nearly zero and was unveiling a range of programs to bolster financial markets and the economy, including trillions of dollars of bond purchases and unprecedented efforts to purchase municipal and corporate bonds. The two officials could have benefitted from the Fed’s actions, which likely boosted the stock market.

Powell said that the trades seemed to be “in compliance with the existing rules,” which “just tells you that the problem is that the rules and the practices and the disclosure needs to be improved and that’s what we’re working on.”

Still, he added that the Fed is closely examining the trading “to make sure that it’s in compliance with our rules and with the law.”

Norman Eisen, senior fellow at the Brookings Institution and former ethics adviser to President Barack Obama, said Powell’s comments suggest the Fed is looking at a range of potential regulations and laws that may have been violated, with the most severe being the federal conflict-of-interest law, which can carry criminal penalties.

“The idea that these senior fed officials are actively trading is insane, given the power and information and the responsibility that they have,” he said.

Powell came under fire Tuesday from some Republicans on the committee over high and growing costs for gasoline, food and other goods and services. Annual inflation, according to the Fed’s preferred gauge, reached 4.2% in July, the highest in three decades.

Sen. Pat Toomey, Republican from Pennsylvania, noted that inflation is broadening beyond categories that were upended by the pandemic, such as used cars, and asserted that it has not been just a temporary spike as Powell and some other Fed officials have suggested.

“We need to acknowledge that this is not playing out the way the Fed has hoped,” Toomey said.

Powell agreed that inflation pressures have intensified as supply chain disruptions have persisted and in some cases worsened. But he argued that high inflation is still being driven mainly by a limited number of factors that were worsened by the pandemic, such as hotel rooms, rental cars, and airplane tickets.