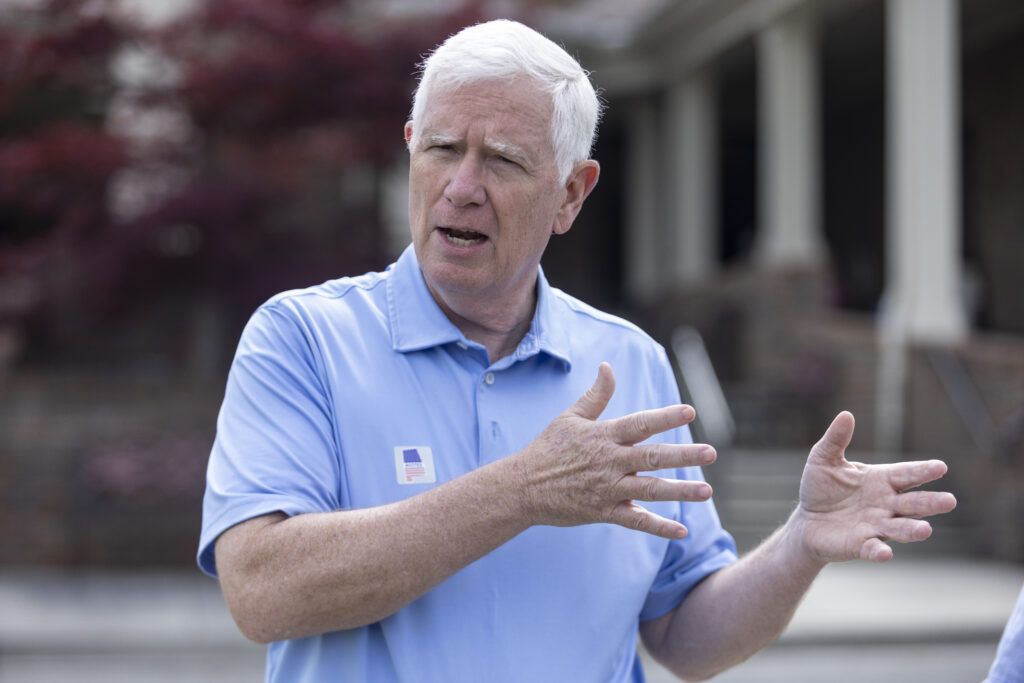 Alabama is one of a handful of states holding contests Tuesday at the midpoint of a primary season that has been shaped by Trump’s effort to influence the GOP, and bring back a conservative tilt to Congress, to fight Joe Biden’s agenda. The Alabama Senate runoff has drawn particular attention both because of the drama surrounding Trump’s endorsement and the fact that the winner will likely prevail in November in a state Trump won twice by more than 25 percentage points. As reported by the AP:

MONTGOMERY, Ala. (AP) — Standing in the sweltering summer heat on the steps of the Alabama Capitol earlier this month, Republican Senate candidate Mo Brooks was hailed by organizers of the Jan. 6, 2021, rally in Washington for his efforts to overturn the results of the 2020 election and keep then-President Donald Trump in power.

“I was proud to stand with Mo Brooks on that stage that day,” said Amy Kremer, chair of Women for America First. “Mo has the truth on his side.”

Less than 10 hours later, Trump returned the favor by snubbing the congressman — for a second time — and instead endorsing rival Katie Britt in Tuesday’s Republican runoff election for the U.S. Senate seat being vacated by Britt’s former boss, retiring GOP Sen. Richard Shelby.

Alabama is one of a handful of states holding contests Tuesday at the midpoint of a primary season that has been shaped by Trump’s effort to influence the GOP. In Virginia, Republicans are choosing between Trump-aligned congressional candidates to take on some of the most vulnerable Democrats in the fall. And in Georgia, Democrats will settle several close races, including deciding which Democrat will challenge Brad Raffensperger, the Republican secretary of state who overcame a Trump-backed challenge last month.

But the Alabama Senate runoff has drawn particular attention both because of the drama surrounding Trump’s endorsement and the fact that the winner will likely prevail in November in a state Trump won twice by more than 25 percentage points.

Trump initially endorsed Brooks in the spring of 2021, rewarding an ardent champion of his baseless claims of a stolen election. Brooks had voted against certifying Democrat Joe Biden’s presidential election victory and delivered a fiery speech at the rally that proceeded the U.S. Capitol insurrection, telling the crowd, “Today is the day that American patriots start taking down names and kicking ass.”

But nearly a year later, Trump rescinded his support after the pair’s relationship soured and as the conservative firebrand languished in the polls. Trump blamed his decision on comments Brooks had made months earlier, at an August rally, when he said it was time for the party to move on from the 2020 presidential race — comments Trump claimed showed Brooks, one of the most conservative members of Congress, had gone “woke.”

But the move was widely seen as an effort by Trump to save face amid other losses, and Brooks alleged that it came after he informed Trump that there was no way to “rescind” the 2020 election, remove Biden from power, or hold a new special election for the presidency.

Trump’s un-endorsement was widely expected to end Brooks’ campaign. Instead, Brooks managed to finish second in the state’s May 24 primary, earning 29% of the vote to Britt’s 45% and forcing a runoff.

Brooks tried once again to get Trump to endorse him, but Trump, who has had a mixed record in backing winning candidates, instead chose Britt, Shelby’s former chief of staff, calling her a “fearless America First Warrior.”

While Brooks and Britt have similar views, their race represents a clash between two wings of the party and different generations. Shelby for decades epitomized the old-guard political style, using his clout and relationships to quietly steer federal projects and funding to his home state.

Britt, 40, has the endorsement of Shelby and other establishment Republicans, as well as deep ties to the state’s business community, reflected in her 2-1 fundraising advantage over Brooks.

Brooks, 68, is known for his bombastic oratory style. The six-term congressman was a founding member of the conservative House Freedom Caucus and has made his opposition to Senate Minority Leader Mitch McConnell a pillar of his campaign, embarking on a “Fire McConnell Tour” of town halls. A super PAC affiliated with McConnell contributed $2 million to a PAC opposing Brooks.

He also has the backing of Texas Sen. Ted Cruz and Kentucky Sen. Rand Paul, who say he would be a needed hard-line addition to the Senate.

“This is a race about conservatives versus the establishment,” Paul said Friday in north Alabama. “We need a fighter. We’re not going to get it if you send us any old Republican. We need a fighter like Mo Brooks.”

Britt, meanwhile, stresses her own social conservative beliefs and has tried to paint Brooks as a career politician, saying Alabamians want “new blood.”

“President Trump knows that Alabamians are sick and tired of failed, do-nothing career politicians. It’s time for the next generation of conservatives to step up and shake things up in Washington,” she said after Trump’s endorsement.

Brooks has disparaged Britt as a RINO — the GOP pejorative meaning “Republican in name only” — and maintained he is the only one with a proven conservative record.

Turnout in the race is expected to be low, with fewer than 15% of registered voters likely to cast ballots, according to Secretary of State John Merrill.

Elsewhere, in the nation’s capital, where Democratic primaries effectively decide winners, Bowser is trying to fend off challenges from a pair of City Council members as the city contends with a rash of crime, including a shooting Sunday in one of the city’s busiest nightlife destinations that left a 15-year-old dead and a police officer and at least two others wounded.

In Virginia, voters are set to pick Republican nominees for what is expected to be a pair of the year’s most competitive U.S. House races.

In the coastal 2nd District, state Sen. Jen Kiggans is widely seen as the GOP front-runner in the Republican race to take on Democrat Elaine Luria, a retired Naval commander and member of the House Jan. 6 committee, in the general election. In central Virginia’s 7th District, six candidates are in a competitive race to face Democratic Rep. Abigail Spanberger, a former CIA officer.

And in Georgia, Democratic state Rep. Bee Nguyen is trying to defeat former state Rep. Dee Dawkins-Haigler in the secretary of state’s race. The winner will face Republican Raffensperger, who rebuffed Trump’s efforts to “find” enough votes to overturn Biden’s win in the state’s 2020 presidential election and beat back a Trump-endorsed challenger in his May 24 primary.

In congressional runoffs, Republican Vernon Jones, a Trump-backed candidate and former Democrat, is competing against trucking company owner Mike Collins for the Republican nomination for the 10th Congressional District seat east of Atlanta.

By KIM CHANDLER and JILL COLVIN