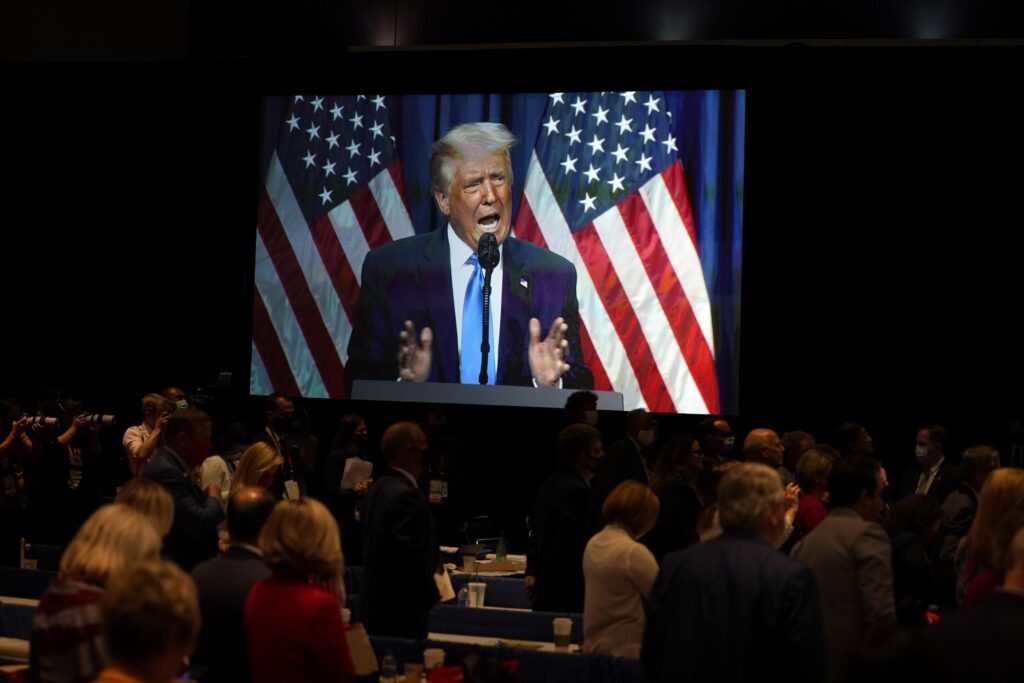 Former President Donald Trump has kept a low profile since leaving office, but has popped up as a speaker at the North Carolina’s annual state Republican Party convention next month. His daughter-in-law Lara Trump is considering running for U.S. Senate there. The Associated Press has the story:

Former President Donald Trump back in the spotlight, will speak at GOP convention in North Carolina

The former president will speak in person at the June 5 convention dinner in Greenville. Trump narrowly carried North Carolina in 2020 and held numerous events in the state toward the end of his campaign.

Trump’s speech will be closed to the media, and journalists won’t be able to view it via livestream or alternate forms, said Livy Polen, a spokeswoman for the NC GOP.

Trump has kept a relatively low public profile since leaving office. His last significant public speech was in February at the CPAC convention. He’s still banned from Twitter and Facebook, and his public comments have largely come in the form of written statements and calling into right-leaning news outlets.

Trump’s daughter-in-law Lara Trump has not yet publicly ruled out a 2022 U.S. Senate run in North Carolina and has expressed interest in the contest. Trump has not endorsed any of the three Republicans already running for the seat being vacated by Republican Sen. Richard Burr.

North Carolina U.S. Rep. Ted Budd and former Rep. Mark Walker, who are vying for the party’s 2022 U.S. Senate nomination, are scheduled to attend the convention, as are U.S. Rep. Madison Cawthorn and four other members of the state’s congressional delegation. Republican South Dakota Gov. Kristi Noem will serve as a guest speaker.

Trump has expressed interest in running for president again in 2024 but has not yet announced a decision. The state party hopes Trump can help Republicans retake control of the U.S. House in the upcoming midterms. NCGOP Chairman Michael Whatley, a staunch Trump ally who also served as one of the former president’s 13 North Carolina electors in 2020, wants Trump to play an active role in North Carolina politics.

“President Trump delivered real results for North Carolina by rebuilding the military, standing strong against China and unleashing the American Economy,” Whatley said in a news release. “We are honored to welcome President Trump to our convention as the Republican Party launches our campaign to retake Congress and the Senate in the 2022 midterms .”

Burr was censured by the state Republican Party following his vote to impeach Trump.

Anderson is a corps member for the Associated Press/Report for America Statehouse News Initiative. Report for America is a nonprofit national service program that places journalists in local newsrooms to report on undercovered issues.