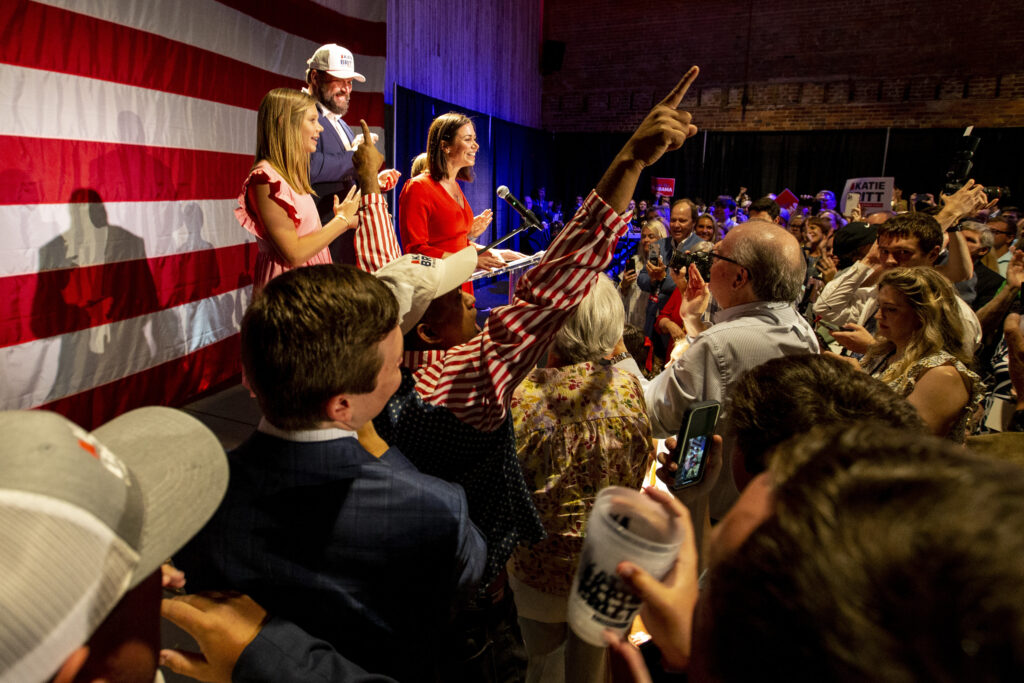 Former President Donald Trump has a pretty good record of getting his endorsed candidates elected, but sometimes in close races where it’s not so clear which is the best conservative candidate, his choice doesn’t always win. A couple of his endorsed congressional candidates in Georgia lost their primary races, but the candidates who won weren’t RINOs. The Associated Press has the story:

WASHINGTON (AP) — A Republican who was backed by Donald Trump at the last minute prevailed on Tuesday in an Alabama Senate runoff. But in neighboring Georgia, the former president’s losing streak deepened.

Takeaways from the latest round of midterm primary elections:

Throughout his life in business, entertainment and, eventually, politics, Trump demanded loyalty from those around him. And over the decades, he’s repeatedly shown that he’s less eager to return the favor.

Rep. Mo Brooks, one of the former president’s most ardent defenders in Congress, felt the sting of that reminder on Tuesday when he lost a runoff for the GOP nomination for a U.S. Senate seat from Alabama. Trump initially backed Brooks, but rescinded that endorsement after the campaign got off to a lackluster start. Then, less than two weeks before the runoff, Trump backed Katie Britt, a candidate more oriented toward the GOP establishment but someone whose victory seemed more assured.

Britt is now the prohibitive favorite in the deep-red state to succeed retiring Sen. Richard Shelby, for whom she formerly worked.

Her victory allows Trump to take credit for the win — even if he waited until the last minute to back her. And it reinforces that with Trump, loyalty often flows in one direction.

On paper, Brooks checked all of the boxes that Trump looks for. He implored election deniers at a Washington rally before the Jan. 6 U.S. Capitol attack to “start taking down names and kicking ass.” He voted in Congress against certifying President Joe Biden’s victory. And he’s remained a denier of the outcome of the 2020 election.

But Brooks also landed in Trump’s bad graces after he said last August that it was time to move on from the 2020 presidential race and focus on upcoming elections. Trump pointed to those comments to accuse Brooks of being “woke,” a dangerous label in conservative circles.

In focusing on adding to his roster of wins, Trump ultimately aligned himself with a candidate who, while deeply conservative, is backed by the GOP establishment the former president has railed against for years. The irony was not lost on Brooks, someone so dedicated to Trump’s agenda that he has called himself “MAGA Mo.”

“We are sending to Washington, D.C., the exact opposite of what we need in the United States Senate. But the voters have spoken,” he said in a concession speech. “They might not have spoken wisely.”

TRUMP WENT DOWN IN GEORGIA

Trump extended his losing streak in Georgia on Tuesday, after two U.S. House candidates he endorsed were blown out in runoff primary elections that represented a continuation of the drubbing he received in the state last month.

Georgia has been a fixation of Trump’s ever since he lost the 2020 election and mounted a pressure campaign to get Republican leaders in the state to overturn results. When they rejected his efforts, Trump’s interests shifted to retribution. He recruited candidates to challenge Republican Gov. Brian Kemp, as well as GOP Secretary of State Brad Raffensperger, Georgia’s top elections official. Both incumbents prevailed.

Trump’s meddling even went so far as to ask Jones, who initially ran for governor, to step aside for his handpicked candidate, former Sen. David Perdue, while offering his endorsement to Jones if he ran for an open House seat instead.

Jones, the former executive of DeKalb County, took him up on that offer and declared himself the “Black Donald Trump!” while challenging his opponents to ”Bring it on, liars!”

But Jones’ baggage, including accusations that he raped a woman in 2004, became a liability in the campaign. The woman dropped charges against Jones, but she never recanted. Jones said the sexual encounter was consensual. But Collins, whose late father represented Georgia in the U.S. House in the 1990s, handed out rape whistles to keep the allegation fresh.

Meanwhile, in the other Atlanta area runoff, McCormick, the doctor, easily beat Trump-backed Jake Evans. McCormick’s name was already well known to many in the district after narrowly losing a high-profile 2020 House race to Democrat Carolyn Bourdeaux. He was backed by the influential conservative group Club For Growth.

In Washington, Bowser fended off a progressive rival in the city’s Democratic primary, overcoming a tough primary campaign that focused on rising crime.

Her victory virtually guarantees that she will win a third consecutive term as mayor in the heavily Democratic city. The results could also be interpreted as the latest warning to progressives that voters in the party’s own base are wary of their criminal justice policies at a time of rising anxiety about public safety

Bowser defeated At-large Councilmember Robert White, who harshly criticized her response to spiraling violent crime rates, and Councilmember Trayon White, who represents Ward 8, the poorest and most crime-ridden area in the district.

The primary unfolded as many progressive cities are struggling with how to address crime.

For citizens of the nation’s capital, much of it has happened on Bowser’s watch. Homicides have risen for four years. The 2021 murder count of 227 was the highest mark since 2003. And in January, a candidate for the D.C. Council, Nate Fleming, was carjacked at gunpoint.

But Bowser, a moderate, adopted a pragmatic approach that may have helped her on Tuesday.

She largely stood by her police department at a time when activists called to defund the police, fighting public battles with the D.C. Council over the police budget. She quietly replaced an older white police chief with a younger Black successor. She also pushed for funding to hire hundreds more police officers over the next decade.