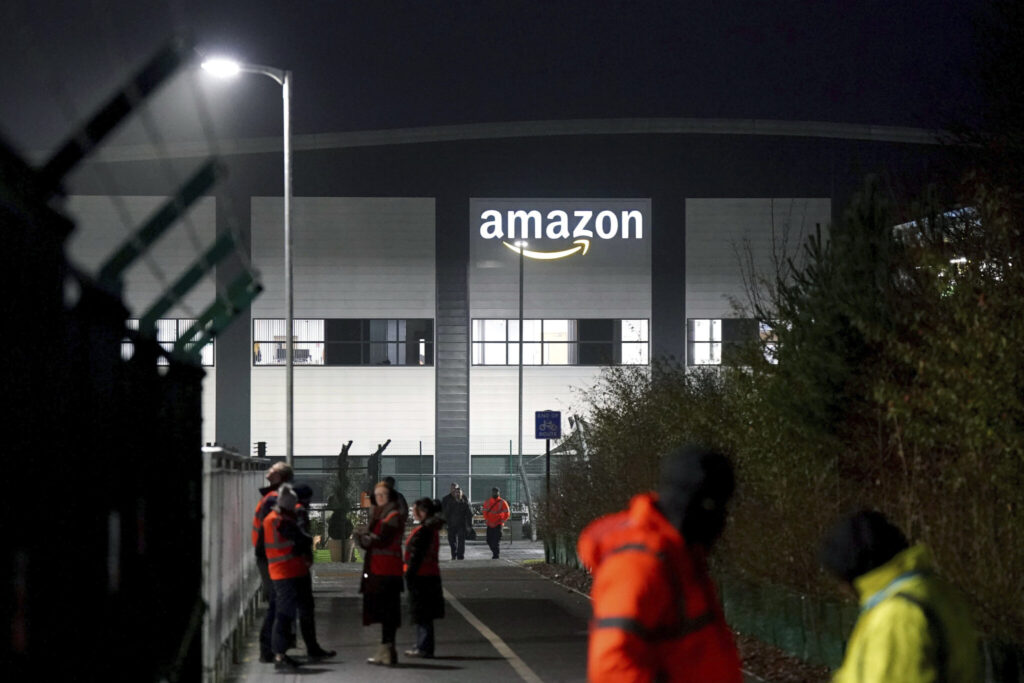 Amazon (AMZN.O) workers at a warehouse in central England walked out on Wednesday in protest over pay, marking the first time the U.S. tech company’s operations in Britain have faced strike action. The GMB union said that surging inflation had pushed its members to take industrial action and that 300 employees from the 350 GMB members at the Coventry site were expected to walk out. The Associated Press has the story:

Amazon warehouse workers went on strike for the first time in Britain on Wednesday because of a dispute over pay and working conditions, adding to a wave of industrial labor action across the country fueled by the soaring cost of living.

Union members voted to walk off the job for one day at the e-commerce giant’s fulfillment center in Coventry, a city about 100 miles (160 kilometers) northwest of London near Birmingham.

Amanda Gearing, a senior organizer with the GMB union, said Amazon staff who worked through tough conditions during the COVID-19 pandemic are just “trying to get decent pay.” Another big issue is performance targets set by an algorithm that piles extra pressure on workers, she said.

The union is fighting for a bigger pay raise than the company’s offer, which it says amounts to an extra 50 pence (61 cents) an hour.

Amazon, which operates 30 fulfillment centers in the United Kingdom, said 2,000 workers are employed at the Coventry facility. The union says 98% of those who took part in the vote decided to strike, and Amazon said that amounts to only 178 workers.

The company said it’s offering “competitive pay” starting at 10.50 to 11.45 pounds an hour, depending on location. Amazon says that is a 29% increase in the minimum hourly wage for employees since 2018.

Business at Seattle-based Amazon boomed during the pandemic but, like other tech companies, it has been reversing recent expansions as it faces economic uncertainty. This month, it announced 18,000 layoffs.

Amazon staff are the latest group of British workers to join the picket lines as high food and energy prices drive the highest inflation in decades. Nurses, ambulance workers, train drivers, border staff, driving instructors, bus drivers, teachers and postal workers have all walked off their jobs in recent months to demand higher pay amid the cost-of-living crisis.

Amazon routinely faces protests and walkouts from workers who want higher wages and better working conditions, including elsewhere in Europe, such as Spain and Germany.

Last year on Black Friday, a coalition of unions and advocacy groups coordinated walkouts in more than 30 countries under a campaign called “Make Amazon Pay.” Organizers said they wanted the company to boost pay for hourly workers, extend sick leave and end its effort to fend off unionization, among other things.

In October, the company suspended dozens of workers at a New York warehouse after many of them staged a protest and refused to return to their shifts following a trash compactor fire.