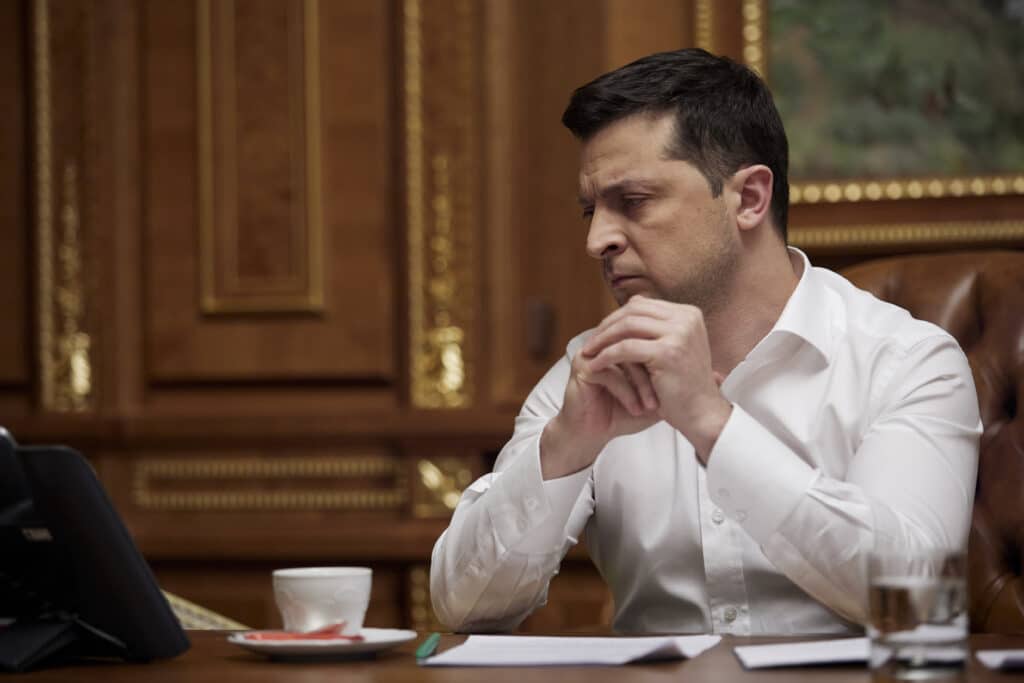 As Russia keeps pushing for the West to ensure it will not allow Ukraine to join NATO, and the U.S. leading the way on opposition to that, tensions are certainly high, what is at stake is nothing less than the worlds safety. Foreign Minister Sergey Lavrov said there is little room for compromise after the West rejected Russia’s key demands that NATO never accept Ukraine as a member. As reported by the AP:

Lavrov said that ‘while they say they won’t change their positions; we won’t change ours’ leaving things at a stalemate for now

WARSAW, Poland (AP) — High-stakes diplomacy continued on Friday in a bid to avert a war in Eastern Europe. The urgent efforts come as 100,000 Russian troops are massed near Ukraine’s border and the Biden administration worries that Russian President Vladimir Putin will mount some sort of invasion within weeks.

Here are things to know about the international tensions surrounding Ukraine.

Russia’s top diplomat said Friday that Moscow will not start a war but that it also wouldn’t allow the West to trample on its security interests.

Foreign Minister Sergey Lavrov said there is little room for compromise after the West rejected Russia’s key demands that NATO never accept Ukraine as a member and that it roll back deployments in Eastern Europe.

He noted, however, that the U.S. — in a recent written response to Russian demands — has suggested the two sides could talk about other issues of importance. Those include limits on the deployment of intermediate-range missiles, restrictions on military drills and rules to prevent accidents between warships and aircraft.

He emphasized that those issues are secondary to Russia’s main demands.

French President Emmanuel Macron spoke for over an hour to his Russian counterpart in hopes that diplomacy can avert a war.

Macron’s call with Putin had two aims, French government spokesman Gabriel Attal said earlier this week: “to continue dialogue” and to “push Russia to clarify its position and the aim of (military) maneuvering.”

Macron “is at the heart of efforts towards de-escalation,” Attal added.

Macron is also due to speak to Ukrainian President Volodymyr Zelenskyy in the evening.

Germany expressed regret that Russia has suspended mutual military inspections at a time of heightened tensions between Moscow and NATO.

The inspections are intended as confidence-building measures among members of the Organizations for Security and Cooperation in Europe.

A spokesman for Germany’s Foreign Ministry said Russia recently announced it would suspend the inspections until the end of February, citing the spread of the omicron variant.

“Because of this an inspection on Russian territory in the border region of Ukraine, Belarus, and Russia, which Russia had previously agreed to, won’t currently be possible,” said the spokesman, Christofer Burger.

“We expressly regret this step because particularly in the current situation anything which creates greater transparency would help reduce tensions,” he said. “That’s why we are calling on Russia to voluntarily and extensively inform OSCE member states about its activities.”

Burger said Russia had also unilaterally canceled inspections it was due to conduct in Germany.

EXPOSING DISINFORMATION, BUT ARE THERE RISKS?

In a break from the past, the U.S. and its allies are increasingly revealing their intelligence findings as they confront Russian preparations for invading Ukraine, looking to undercut Putin’s plans by exposing them and deflecting his efforts to shape world opinion.

The White House in recent weeks publicized what it said was a developing Russian “false-flag” operation to create a pretext for an invasion.

Britain named specific Ukrainians it accused of having ties to Russian intelligence officers plotting to overthrow Zelenskyy. The U.S. also released a map of Russian military positions and detailed how officials believe Russia will try to attack Ukraine with as many as 175,000 troops.

But the release of information isn’t without risks. Intelligence assessments carry varying degrees of certainty, and beyond offering photos of troop movements, the U.S. and its allies have provided little other proof. Moscow has dismissed Washington’s claims as hysteria and invoked past American intelligence failures, including false information put forward about Iraq’s weapons programs.

WHAT ABOUT THOSE GERMAN HOWITZERS?

German government spokesman Steffen Hebestreit says a decision had not yet been reached on whether to approve Estonia’s request to transfer artillery guns to Ukraine.

Hebestreit on Friday warned against pursuing what he called a “military logic” amid demands for German approval to deliver the howitzers to Ukraine.

“When push comes to shove that wouldn’t be a real solution either,” Hebestreit said. “That’s no game changer now.”

The German government spokesman says Russia remains a reliable natural gas supplier, but Berlin was preparing for all scenarios.

Spokesman Steffen Hebestreit made the remark on Friday amid concerns that Russia might turn off natural gas supplies to Europe.

“In our view the Russian gas supply contracts are being fulfilled everywhere so far and we strongly assume that this will remain the case and Russia will continue to be a reliable contractual partner,” Hebestreit said.

“At the same time, it’s clear that one needs to prepare for all eventualities, and this is what the German government is doing,” he added, declining to elaborate.

HOW IS THE UK BOLSTERING ITS CYBER DEFENSES?

The U.K.’s National Cyber Security Centre is urging businesses to strengthen measures to protect computer networks amid the ongoing crisis in Ukraine.

The center said Friday that it is investigating recent reports of “malicious cyber incidents” in Ukraine and that these attacks are similar to a pattern of Russian behavior seen during earlier conflicts.

While authorities aren’t aware of any specific threats against the U.K., the center is encouraging large organizations to bolster online defenses to protect computer networks against potential attacks. The center is part of GCHQ, Britain’s signals intelligence agency.

“We are monitoring the situation closely and it is vital that organizations follow the guidance to ensure they are resilient,” said Paul Chichester, NCSC Director of Operations. “Over several years, we have observed a pattern of malicious Russian behavior in cyberspace.”