Ukraine stance, are US and Russia headed to disaster? 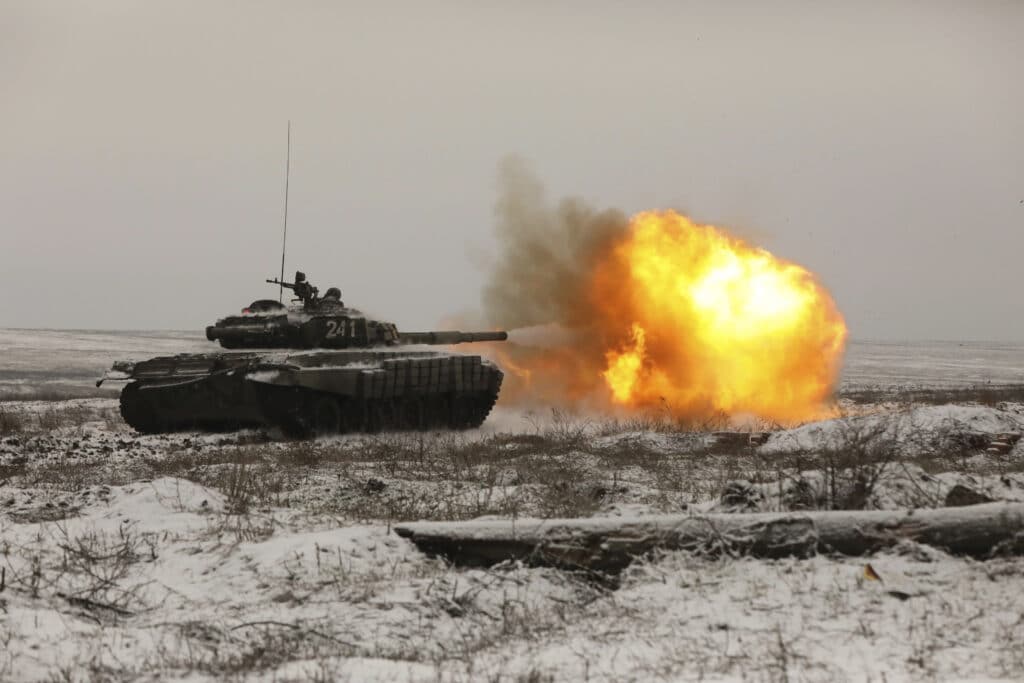 Unlike previous disagreements that have arisen since the collapse of the Soviet Union the current Ukraine crisis has presented some seemingly difficult challenges that the two sides may not be able to overcome, at least not without one side giving in completely. For the U.S. and its NATO and other European allies, nothing less than a complete pullback of the roughly 100,000 Russian troops now deployed near the Ukrainian border will be accepted. As reported by the AP:

WASHINGTON (AP) — The failure of last week’s high-stakes diplomatic meetings to resolve escalating tensions over Ukraine has put Russia, the United States, and its European allies in uncharted post-Cold War territory, posing significant challenges for the main players to avoid an outright and potentially disastrous confrontation.

Unlike previous disagreements that have arisen since the collapse of the Soviet Union, the current Ukraine crisis and seemingly insurmountable differences between Washington and Moscow carry real risks of debilitating economic warfare and military conflict that are exacerbated by the dangers of miscalculation and overreaction.

For the U.S. and its NATO and other European allies, nothing less than a vast pullback of the roughly 100,000 Russian troops now deployed near the Ukrainian border will prove that Russian President Vladimir Putin has any intention of negotiating in good faith. For the Russians, the West’s absolute refusal to consider a ban on NATO expansion and the withdrawal of troops from Eastern Europe is proof of its perfidy.

Potential concessions are complicated by the fact neither Russian President Vladimir Putin nor President Joe Biden wants to be seen as backing down before either domestic or foreign audiences.

The refusal thus far by each side to climb down from what the other regards as unrealistic and maximalist demands on Ukraine, has left the prospects for diplomacy in limbo, with the U.S. and its allies accusing Russia of stoking tensions for no legitimate reason and the Russians complaining again that the Americans are the aggressors.

Some believe the situation will have to become even more dire before the impasse can be broken.

“The gap in perceptions is so broad that a new and dangerous escalation could be necessary to make the parties open up their imagination and search for agreements,” Fyodor Lukyanov, the head of the Moscow-based Council for Foreign and Defense Policies, observed in a commentary.

For Western analysts, it seems a situation in which Putin will have to compromise if conflict is to be avoided. Some think Putin’s focus on NATO, which has struggled for years with questions about its relevance, may have given the alliance a new lease on life.

“This is an extremely uncertain and tense period without an obvious way out unless Putin backs down on Ukraine stance,” said Jeff Rathke, a Europe expert and former U.S. diplomat who is currently president of the American Institute for Contemporary German Studies at Johns Hopkins University.

“He’s talked himself into a frenzy that is hard to walk away from if he doesn’t get the fundamental redrawing of the European security architecture that he claims to want. He’s shown he’s ready to play chicken with the threat of massive military force to bring that about and he’s certainly gotten everyone’s attention, but he hasn’t changed anyone’s views,” Rathke said.

U.S. officials from Biden, Secretary of State Antony Blinken and national security adviser Jake Sullivan to chief negotiator Wendy Sherman have said it is Russia that faces a “stark choice.” De-escalate or face punishing sanctions and the opposite of what it wants: an increased NATO presence in Eastern Europe and a more well-armed Ukraine.

Yet in Russia, officials say the shoe is on the other foot. They have cast their demands as an “absolute imperative” and have argued that the Western failure to meet them makes talks on other issues irrelevant.

Foreign Minister Sergey Lavrov said Friday that Russia had vainly tried for years to persuade the U.S. and its allies to engage in talks on the non-deployment of intermediate-range missiles to Europe, limits on war games and rules to avoid dangerously close encounters between Russian and allied warships and aircraft until the U.S. and NATO expressed willingness to discuss those issues this week.

He attributed the change in approach to a U.S. desire to shift attention away from Russia’s main demands, adding that Moscow will focus on NATO non-expansion. And he insisted that it’s the U.S. that’s formulating the position in talks while other allies just march on its orders.

“To be frank, everyone understands that the prospect for reaching a deal depends on the U.S.,” Lavrov said. He said whatever the U.S. says about the need to consult allies in negotiations “are just excuses and attempts to drag the process out.”

The West’s approach has been to have “as much diplomatic effort as possible to de-escalate,” said Andrew Weiss, vice president for studies at the Carnegie Endowment for International Peace, where he oversees research in Washington and Moscow on Russia and Eurasia.

“The problem we’ve got is that the Russians mean business, and they’ve shown us in a bunch of cases, in 2014, in 2008, that they’re prepared to go to war to get these things, and we’re not,” he said. “And that’s the challenge.”

The tough and uncompromising Russian positions have led some to believe that Moscow will only up the ante after receiving what all sides expect will be formal, written refusals from the U.S. and NATO to accede to its demands.

Indeed, the chief Russian negotiator in the talks, Deputy Foreign Minister Sergei Ryabkov, suggested Thursday that Moscow might respond to rejections by escalating matters outside of Europe through the potential deployment of troops to Cuba and Venezuela. The U.S. has called such a suggestion “bluster” and said it would respond decisively if it happened.

“The lack of a diplomatic solution logically leads to the further exacerbation of the crisis,” wrote Dmitri Trenin, the head of the Carnegie Moscow Center, in an online analysis.

Trenin predicted that a set of “military-technical measures” that Putin said Russia would take if the West rejects its demands could include “a broad array of moves … from the deployment of new weapons systems in various regions to much stronger military ties with Belarus and a closer coordination with the Chinese partners.”

Still, there’s a risk that by focusing his ire on NATO, Putin may have inadvertently strengthened its hand, especially with its newer members like the Baltic states, Hungary, Poland and the Czech Republic.

“For countries that have joined NATO since the Cold War, you can definitely say that NATO is more relevant to them now than it was a year ago or in 2014,” Rathke said. “Anyone who thought that NATO was no longer relevant to European security has been taught a lesson in the last few months. And it’s only going to get worse.”

By MATTHEW LEE and VLADIMIR ISACHENKOV

Isachenkov reported from Moscow. Lorne Cook in Brussels contributed to this report.