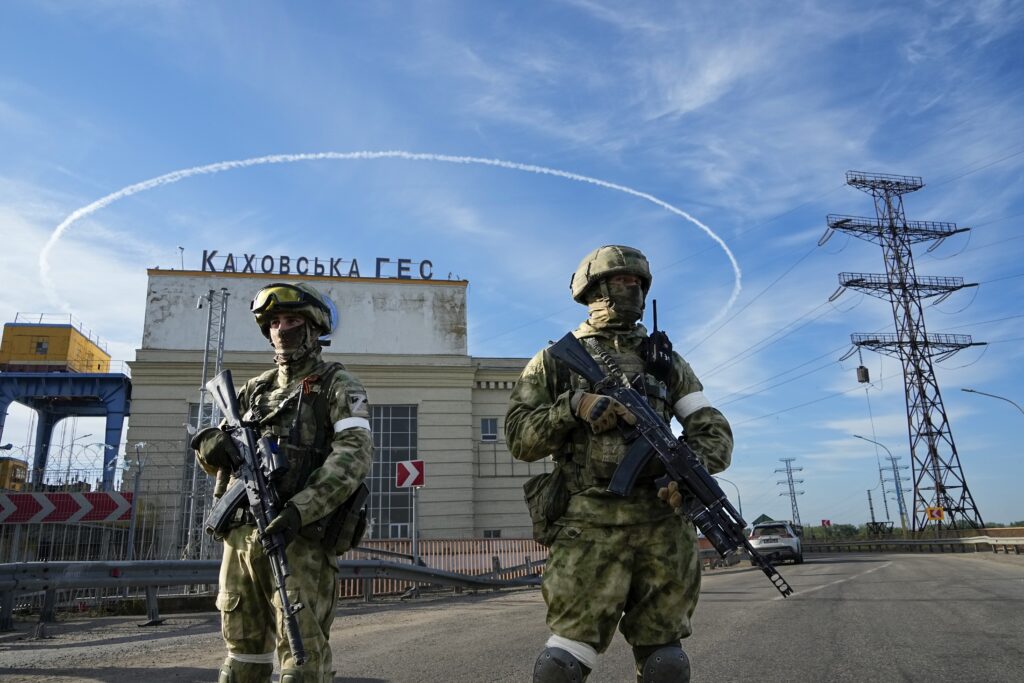 The U.N. nuclear chief warned Thursday that “very alarming” military activity at Europe’s largest nuclear plant in southeastern Ukraine could lead to dangerous consequences for the region and called for an end to attacks at the Russian-controlled Zaporizhzhia facility.

Rafael Grossi urged Russia and Ukraine, who blame each other for the attacks at the plant, to immediately allow nuclear experts to assess damage and evaluate safety and security at the sprawling nuclear complex where the situation “has been deteriorating very rapidly.”

Last week, Grossi said in an Associated Press interview that the situation at Zaporizhzhia was “completely out of control.”

Grossi’s appeal echoed U.N. Secretary-General Antonio Guterres’ call earlier Thursday for an end to all military activity around the Zaporizhzhia plant, warning that any damage could lead to “catastrophic consequences” in the vicinity, the region and beyond.

Grossi, director general of the International Atomic Energy Agency, gave a virtual briefing to the U.N. Security Council at a meeting called by Russia to discuss what Moscow claims were Ukrainian attacks on the plant.

While the plant is controlled by Russia, its Ukrainian staff continues to run the nuclear operations. It is in Enerhodar, a city seized by Russian troops in early March soon after they invaded Ukraine.

Grossi said statements received from Russia and Ukraine “are frequently contradicted” and the IAEA can’t corroborate important facts unless its experts visit Zaporizhzhia.

Russian Ambassador Vassily Nebenzia told the council that ”Kyiv’s criminal attacks on nuclear infrastructure are pushing the world to the brink of nuclear catastrophe.”

He accused Ukrainian armed forces in recent days of repeatedly using heavy artillery and multiple-launch rocket systems to shell the Zaporizhzhia plant, including on Thursday.

“The background radiation at the nuclear power plant at the moment is within limits, but if the strikes continue it is only a question of time,” Nebenzia warned. “We call on states that support the Kyiv regime to bring their proxies into check to compel them to immediately and once and for all stop attacks.”

Ukraine’s U.N. ambassador, Sergiy Kyslytsya, accused Russia of using “elaborate plans of deceit, sabotage and cover-ups” to stage the shelling at Zaporizhzhia, including on Thursday, which poses “an unprecedented threat to nuclear security for Ukraine, to Europe and the world as a whole.”

The Ukrainian state company operating the plant, Enerhoatom, said there was renewed Russian shelling of the Zaporizhzhia facility and nearby buildings Thursday.

“Five (hits) were recorded near the plant management’s office — right next to the welding site and the storage facility for radiation sources,” Enerhoatom said in a post on its official Telegram channel. “The grass caught fire over a small area, but fortunately, no one was hurt.”

Ukraine’s ambassador told the council the only way to remove the nuclear threats is by withdrawing Russian troops and returning the plant to Ukraine’s control.

Nebenzia said Russia supported an IAEA visit in June to Zaporizhzhia, which was given “a red light” at the last minute by U.N. security experts. Moscow is ready to provide “all possible assistance” to resolve any issues for a visit “even before the end of August,” he said.

Yevhen Balytskyy, the Kremlin-installed temporary head of the Zaporizhzhia region, said Thursday that the Russia-backed administration there stood ready to ensure the safety and security of any IAEA delegation sent to investigate conditions. He said in an interview on Russian state TV that the Kremlin-backed authorities had prepared armored vehicles for the international envoys.

Kyslytsya blamed Russia’s “unjustified conditions” for the delay in getting IAEA experts to Zaporizhzhia, and said Ukraine stands ready to provide “all necessary assistance” to facilitate the nuclear team’s travels through Ukrainian-controlled territory, which is just five miles from the plant across the Dnieper River.

Bonnie Jenkins, U.S. undersecretary of state for arms control, called the situation at Zaporizhzhia “another tragic result” of Russia’s invasion of Ukraine. She said the solution is straightforward: Russia should immediately withdraw its forces from Ukraine so Ukrainians can to restore “the impeccable safety, security, and safeguards performance it upheld for decades at the facility.”

At the end of the council meeting, Grossi said there was “a common denominator” among the 15 members: “Everybody agrees that nuclear safety and security must be preserved. … And everybody believes that this mission must take place.”

“So, it’s no longer a matter of if, it’s only a matter of when,” the U.N. nuclear chief said. “The when must be as soon as possible.”

Guterres appealed in a statement “for common sense and reason” to avoid any actions “that might endanger the physical integrity, safety or security of the nuclear plant,” and for the withdrawal of all military personnel and equipment.

The Russian capture of Zaporizhzhia renewed fears that reactors at the largest of Ukraine’s four nuclear plants could be damaged, setting off another emergency like the 1986 Chernobyl accident, the world’s worst nuclear disaster. That happened about 110 kilometers (65 miles) north of the capital Kyiv.

Ukrainian President Volodymyr Zelenskyy told defense leaders at a conference in Copenhagen on Thursday that the consequences of a radiation accident at Zaporizhzhia “could be even more catastrophic than Chernobyl, and essentially the same as the use of nuclear weapons by Russia, but without a nuclear strike.”

“If the Soviet authorities tried to hide the Chernobyl disaster and its full consequences, Russian authorities are much more cynical and dangerous,” he said. “They are doing everything themselves to maximize the risk of a nuclear disaster, and lie to the whole world that someone else is allegedly to blame.”