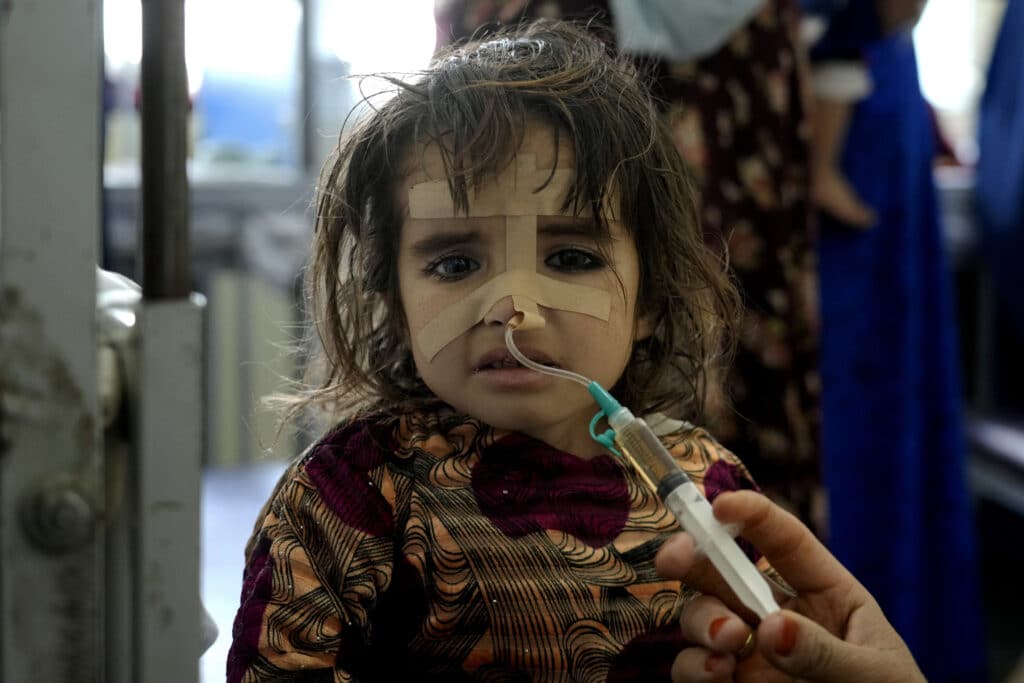 The Taliban takeover of Afghanistan is worsening conditions in the country, and one of them is adequate food for children. A staggering 1.1 million children under age 5 are expected to experience severe malnutrition this year, the U.N. says. The Associated Press has the story:

ISLAMABAD (AP) — In Afghanistan, 1.1 million children under the age of 5 will likely face the most severe form of malnutrition this year, according to the U.N., as increasing numbers of hungry, wasting-away children are brought into hospital wards.

U.N. and other aid agencies were able to stave off outright famine after the Taliban takeover of Afghanistan last year, rolling out a massive emergency aid program that fed millions.

But they are struggling to keep pace with relentlessly worsening conditions. Poverty is spiraling and making more Afghans in need of aid, global food prices are mounting from the war in Ukraine and promises of international funding so far are not coming through, according to an assessment report issued this month.

As a result, the vulnerable are falling victim, including children but also mothers struggling to feed themselves along with their families.

Nazia said she had lost four children to malnutrition — two daughters and two sons under 2 years old. “All four died due to financial problems and poverty,” the 30-year-old Nazia said. When her children fell ill, she didn’t have the money to treat them.

Nazia spoke to The Associated Press at Charakar Hospital in the northern province of Parwan, where she and her 7-month-old daughter were both being treated for malnutrition. Her husband is a day laborer but is also a drug addict and rarely brings in an income, she said. Like many Afghans, she uses only one name.

UNICEF, the U.N. children’s agency, said 1.1 million children this year are expected to suffer from severe acute malnutrition, also known as severe wasting, nearly double the number in 2018 and up from just under 1 million last year.

Severe wasting is the most lethal type of malnutrition, in which food is so lacking that a child’s immune system is compromised, according to UNICEF. They become vulnerable to multiple bouts of disease and eventually they become so weak they can’t absorb nutrients.

The numbers of children under 5 being admitted into health facilities with severe acute malnutrition have steadily mounted, from 16,000 in March 2020 to 18,000 in March 2021, then leaping to 28,000 in March 2022, the UNICEF representative in Afghanistan, Mohamed Ag Ayoya, wrote in a tweet last week.

Hit by one of its worst droughts in decades and torn by years of war, Afghanistan was already facing a hunger emergency; but the Taliban takeover in August threw the country into crisis. Many development agencies pulled out and international sanctions cut off billions in finances for the government, collapsing the economy.

Millions were plunged into poverty, struggling to afford food for their families. By the end of last year, half the population of around 38 million lived under the poverty line, according to U.N. figures. As the economy continues to crumble and prices mount, that could rise this year to as high as 97% of the population by mid-2022, according to the U.N. Development Program.

Because of poverty, “mothers do not have proper nutrition during pregnancy, and are not able to eat properly after birth, said Mohammad Sharif, a doctor at Charakar hospital.

At the Mirwais Hospital in southern Kandahar province, 1,100 children with malnutrition have been admitted in the past six months, 30 of whom died, said Dr. Mohammad Sediq, head of the children’s ward.

One mother, Kobra, said she had been unable to breastfeed her 6-month-old child. “He is constantly losing weight and cries a lot, I know it is all because of hunger, but I can’t do anything” she said.

At her home in an impoverished district of Kandahar city, Jamila said her 8-month-old son died last month after being diagnosed with severe malnutrition. If she doesn’t get help, she fears for her other four children, she said.

“The government hasn’t helped us at all, no one has asked us if we are hungry or have something to eat or not,” she said.

U.N. agencies launched a massive, accelerated aid program after the Taliban takeover, ramping up to a point that they now deliver food assistance to 38% of the population.

The number of people facing acute food insecurity fell slightly from 22.8 million late last year to 19.7 million currently, according to a May report by IPC, a partnership among U.N. and other agencies that assesses food security. From June to November this year, that number is expected to fall a little further, to 18.9 million, IPC said.

But those small reductions “are far from indicating a positive trend,” it warned.

The decrease was low compared to the scale of the aid, it said. Moreover, deteriorating conditions threaten to overwhelm the effort. It pointed to the continued crumbling of the economy, higher food and fuel prices and supply disruptions caused by the Ukraine war, and “unprecedented inflation” in Afghanistan.

Meanwhile, lack of funding threatens aid’s reach. The proportion of the population receiving food aid could plummet to only 8% over the next six months because so far only $601 million of the $4.4 billion needed has been received from the world community, the IPC said. Just over $2 billion has been pledged.

“Every year, all the factors connected to malnutrition keep going up,” she told the AP. It just keeps going up and up in terms of a deteriorating situation.

Drought has been the main driver of food insecurity, she said, compounded by growing poverty, lack of access to clean water and to medical care, need for greater vaccination for diseases like measles that hit malnourished children.

The good news is that agencies have access to the entire country now, she said. UNICEF opened around 1,000 treatment sites in remote locations where parents can bring their malnourished children rather than having to trek to larger urban centers.

But an emergency response is not sustainable in the longer term, she said. “We need all these factors in the external environment to improve.”

By RAHIM FAIEZ and LEE KEATH