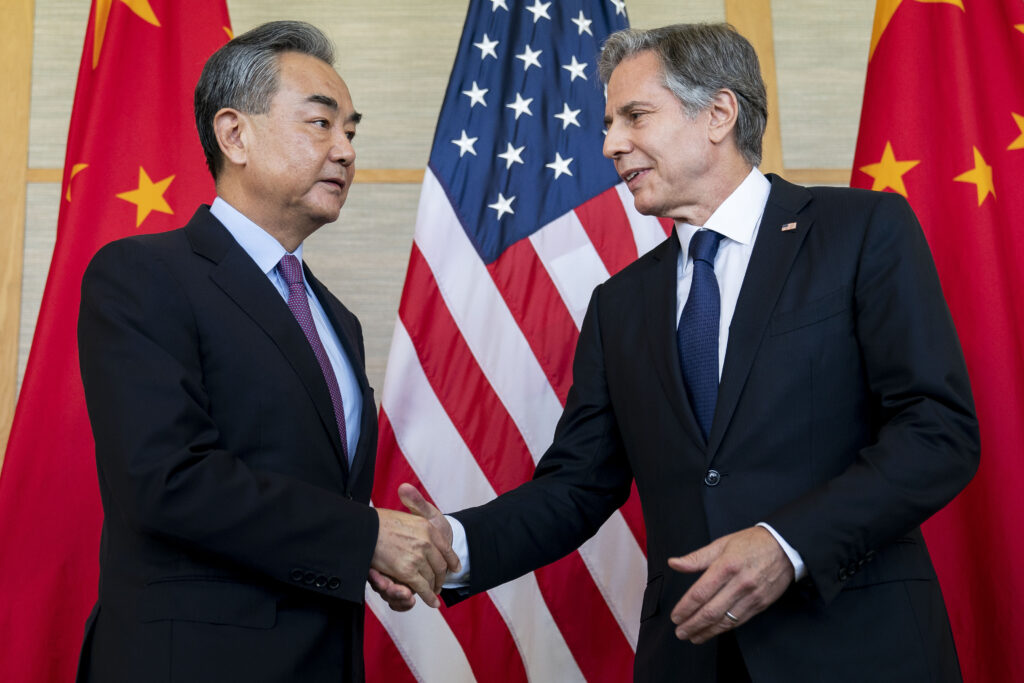 China’s support for Russia’s war in Ukraine is complicating U.S.-Chinese relations at a time when they are already beset by rifts and enmity over numerous other issues, U.S. Secretary of State Antony Blinken told his Chinese counterpart on Saturday.

In five hours of talks in their first-to-face meeting since October, Blinken said he expressed deep concern to Foreign Minister Wang Yi about China’s stance on Russia’s actions in Ukraine and did not believe Beijing’s protestations that it is neutral in the conflict.

The talks had been arranged in a new effort to try to rein in or at least manage rampant hostility that has come to define recent relations between Washington and Beijing.

“We are concerned about the PRC’s alignment with Russia,” Blinken told reporters after the meeting in the Indonesian resort of Bali. He said it is difficult to be “neutral” in a conflict in which there is a clear aggressor but that even it were possible, “I don’t believe China is acting in a way that is neutral.”

The Biden administration had hoped that China, with its long history of opposing what it sees as interference in its own internal affairs, would take a similar position with Russia and Ukraine. But it has not, choosing instead what U.S. officials see as a hybrid position that is damaging the international rules-based order.

Blinken said every nation, China included, stands to lose if that order is eroded.

The two men met a day after they both attended a gathering of top diplomats from the Group of 20 rich and large developing countries that ended without a joint call to end Russia’s war in Ukraine or plan for how to deal with its impacts on food and energy security.

However, Blinken said he believed Russia had come away from G-20 meeting isolated and alone as most participants expressed opposition to the Ukraine war. However, the ministers were unable to come to a unified G-20 call for an end to the conflict.

“There was a strong consensus and Russia was left isolated,” Blinken said of individual condemnations of Russia’s actions from various ministers, some of whom shunned conversations with Russian Foreign Minister Sergey Lavrov.

He noted that Lavrov had left the meeting early, possibly because he didn’t like what he was hearing from his counterparts.

“It was very important that he heard loudly and clearly from around the world condemnation of Russia’s aggression,” Blinken said, adding: “We see no signs whatsoever that Russia at his point is prepared to engage in diplomacy.”

On China, Blinken said he and Wang discussed a range of contentious issues from tariffs and trade and human rights to Taiwan and disputes in the South China Sea that have all been complicated by the Chinese position on Ukraine.

Just two days earlier, the countries’ top military officers had faced off over Taiwan during a virtual meeting. Blinken said that the self-ruled island that Beijing claims as its territory was just one of a series of problematic issues.

He said he stressed U.S. concerns with China’s “increasingly provocative rhetoric and activity near Taiwan and the vital importance of maintaining peace and stability across the Taiwan Strait.” He added that he had also raised human rights concerns regarding minorities in Tibet and in the western Xinjiang region.

Going into the talks, Wang said “it is necessary for the two countries to maintain normal exchanges” and “to work together to ensure that this relationship will continue to move forward along the right track.”

Wang also echoed frequent Chinese lines about remaining committed to the principles of “mutual respect,” “peaceful coexistence” and “win-win cooperation.” That, he said, “serves the interests of the two countries and two peoples. It is also the shared aspiration of the international community.”

U.S. officials had said ahead of time they don’t expect any breakthroughs from Blinken’s talks with Wang. But they said they were hopeful the conversation can help keep lines of communications open and create “guardrails” to guide the world’s two largest economies as they navigate increasingly complex and potentially explosive matters.

“We’re committed to managing this relationship, this competition responsibly as the world expects us to do,” Blinken said.

The United States and China have staked out increasingly confrontational positions, including on Ukraine, that some fear could lead to miscalculation and conflict. The U.S. has watched warily as China has refused to criticize the Russian invasion, while condemning Western sanctions against Russia and accusing the U.S. and NATO of provoking the conflict.

“We are concerned about the PRC’s alignment with Russia,” Blinken said, adding that he did not accept Chinese protestations that it is neutral in the Ukraine conflict. “I don’t believe China is acting in a way that is neutral.”

The Biden administration had hoped that China, with its long history of opposing what it sees as interference in its own internal affairs, would take a similar position with Russia and Ukraine. But, it has not, choosing instead what U.S. officials see as a hybrid position that is damaging the international rules-based order.

At the G-20 meeting, Wang made an oblique reference to China’s policy on global stability, saying “to place one’s own security above the security of others and intensify military blocs will only split the international community and make oneself less secure,” according to the Chinese Foreign Ministry.

Li demanded that the U.S. cease military “collusion” with Taiwan, saying China has “no room for compromise” on issues affecting its “core interests,” which include self-governing Taiwan, which Beijing threatens to annex by force if necessary.

The meeting between Li and Milley followed fiery comments by Chinese Defense Minister Wei Fenghe at a regional security conference last month that was also attended by U.S. Secretary of Defense Lloyd Austin.

Wei accused the United States of trying to “hijack” the support of countries in the Asia-Pacific region to turn them against Beijing, saying Washington is seeking to advance its own interests “under the guise of multilateralism.”

At the same meeting in Singapore, Austin said China was causing instability with its claim to Taiwan and its increased military activity in the area.

In May, Blinken incurred Chinese wrath by calling the country the “most serious long-term challenge to the international order” for the United States, with its claims to Taiwan and efforts to dominate the strategic South China Sea.

The U.S. and its allies have responded with what they term “freedom of navigation” patrols in the South China Sea, prompting angry responses from Beijing.