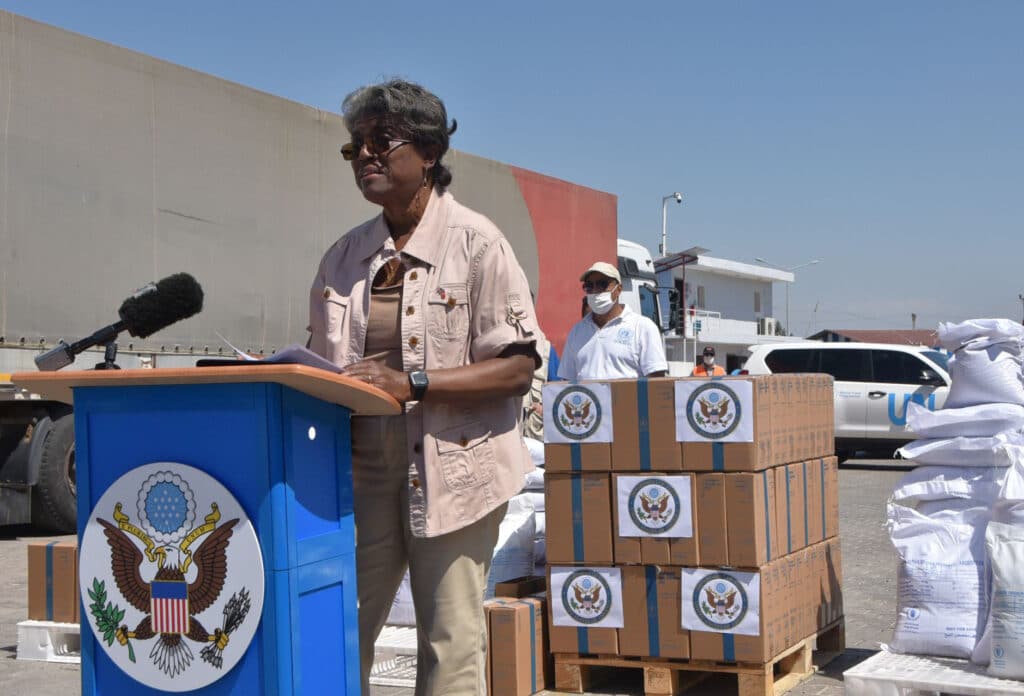 U.S. Ambassador Linda Thomas-Greenfield expressed her concern that the only access point for humanitarian aid to enter Syria may close. Russia has insisted on shutting down all access except for that one spot through Turkey. The Associated Press has the story:

Last remaining humanitarian border into Syria may be closed

ANKARA, Turkey (AP) — The closure of a final humanitarian border crossing into Syrian could cause “senseless cruelty” to millions of Syrians, the U.S. ambassador to the United Nations said Friday, renewing a call for the U.N. Security Council to extend authorization for the delivery of cross-border humanitarian assistance.

U.S. Ambassador Linda Thomas-Greenfield made the comments at the end of a three-day visit to Turkey, which included a trip to the Bab al-Hawa border crossing — the sole remaining access point for humanitarian aid to enter conflict-ravaged Syria.

Russia, which is Syria’s closest ally, has limited cross-border transfers of humanitarian aid in recent years, insisting that the Syrian government should control all assistance to the millions of Syrians in need. International crossing points were reduced at Russia’s insistence to the single border station leading from Turkey to Syria’s rebel-held northwest.

The United States is seeking the reauthorization of U.N. access at Bab al-Hawa and the reopening of other border crossings before the current U.N. Security Council mandate for humanitarian aid deliveries expires on July 10. There is strong support in the 15-member council for maintaining and even adding border crossings, but Russia holds the key.

“We call on the rest of the Security Council to renew this mandate so that we can stop the suffering and help those in desperate need,” she said. “We want the U.N. to bring food to starving children and protection to homeless families. We want the U.N. to be able to deliver vaccines in the middle of a global pandemic.”

Thomas-Greenfield said she would meet with her Russian counterpart and other members of the Security Council to press for the extended access and the reopening of other border crossings. U.S. Secretary of State Antony Blinken also plans to discuss the issue with the Russian foreign minister, she said.

“In my engagement with (the Russian ambassador to the U.N.), I will share with him what I saw on the border, the concerns that people have, the worry that they have that this one lifeline that they have for the community and assistance might be closed,” she said.

Thomas-Greenfield met with Turkish Foreign Minister Mevlut Cavusoglu and Ibrahim Kalin, the presidential spokesman and top aide to President Recep Tayyip Erdogan, during her stay in Turkey, which hosts some 4 million Syrian refugees.

Ankara and Washington once considered each other strategic partners, but ties steadily deteriorated in recent years over differences on Syria, Turkey’s cooperation with Russia, and Turkish naval interventions in the eastern Mediterranean that U.S. officials have described as destabilizing.

“We have a nuanced, strategic relationship with our NATO ally, Turkey. We agree on some areas and we disagree on others. Maintaining humanitarian cross-border access into Syria is one place where our values are completely aligned.” Thomas-Greenfield said.