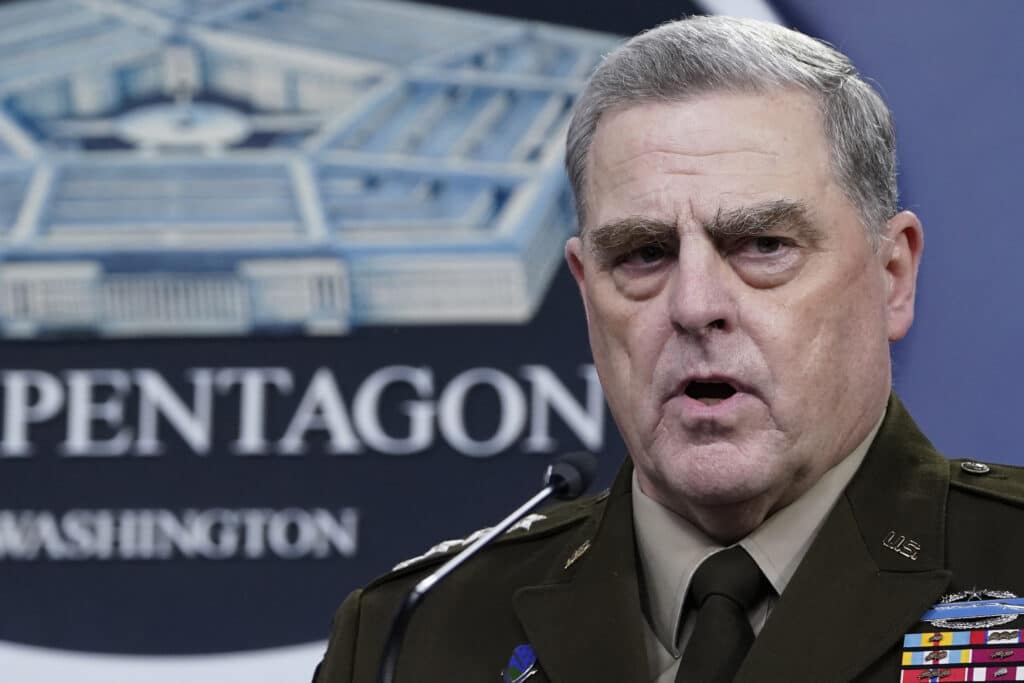 General Mark Milley, chairman of the Joint Chiefs of Staff, is under fire after a book came out revealing that he made phone calls to the Chinese while serving under President Trump, telling them that Trump was not going to launch a military strike on them. Milley said he thought Trump had suffered a mental decline after the election. The Associated Press has the story:

While some call for Milley to resign, Biden stands behind him

WASHINGTON (AP) — The top U.S. military officer on Wednesday defended the phone calls he made to his Chinese counterpart in the turbulent final months of Donald Trump’s presidency, saying the conversations were intended to convey “reassurance” to the Chinese military and were in line with his responsibilities as chairman of the Joint Chiefs of Staff.

Some in Congress accused Gen. Mark Milley of having overstepped his authority and urged President Joe Biden to fire him, but Biden indicated Wednesday he stands behind Milley.

“I have great confidence in Gen. Milley,” Biden said when asked by a reporter whether Milley had done the right thing.

In a written statement, Milley’s spokesman, Col. Dave Butler, said Milley acted within his authority as the most senior uniformed adviser to the president and to the secretary of defense.

“His calls with the Chinese and others in October and January were in keeping with these duties and responsibilities conveying reassurance in order to maintain strategic stability,” Butler said. “All calls from the chairman to his counterparts, including those reported, are staffed, coordinated and communicated with the Department of Defense and the interagency.”

The Milley phone calls were described in excerpts from the forthcoming book “Peril” by Washington Post journalists Bob Woodward and Robert Costa. The book says Milley told Gen. Li Zuocheng of the People’s Liberation Army that he would warn his counterpart in the event of a U.S. attack.

Milley was appointed chairman of the Joint Chiefs in 2019 by Trump and kept on by Biden. In that position Milley does not command any troops but rather is an adviser to the president and to the secretary of defense. John Kirby, spokesman for Defense Secretary Lloyd Austin, said Austin has “complete and utter trust and confidence in Gen. Milley.”

The book by Woodward and Costa reported that Milley, fearful of Trump’s actions in his final weeks as president, twice called his Chinese counterpart to assure him that the United States was not going to attack China. One call took place on Oct. 30, 2020, four days before the election that Trump lost. The second call was on Jan. 8, 2021, less than two weeks before Biden’s inauguration and just two days after the insurrection at the U.S. Capitol by supporters of Trump.

The Associated Press obtained a copy of the book. Details from the book, which is set to be released next week, were first reported by The Washington Post on Tuesday.

Trump said Milley should be tried for treason if it was true that Milley had promised Li that he would warn him in the event of a U.S. attack.

“General Li, I want to assure you that the American government is stable and everything is going to be okay,” Milley told him in the first call, according to the book. “We are not going to attack or conduct any kinetic operations against you.”

“If we’re going to attack, I’m going to call you ahead of time. It’s not going to be a surprise,” Milley reportedly said.

In his statement Wednesday, Milley’s spokesman did not directly address this aspect of the call but said Milley regularly communicates with his counterparts across the globe, including in China and Russia, to reduce tensions, provide clarity and avoid “unintended consequences or conflict.”

Milley spoke with a number of other military leaders around the world after the Jan. 6 riot, including from the United Kingdom, Russia and Pakistan. A readout of those calls in January referred to “several” other counterparts that he spoke to with similar messages of reassurance that the U.S. government was strong and in control.

The second call was meant to placate Chinese fears about the events of Jan. 6. But the book reports that Li wasn’t as easily assuaged, even after Milley promised him: “We are 100 percent steady. Everything’s fine. But democracy can be sloppy sometimes.”

Trump responded Tuesday with a sharply worded statement dismissing Milley as a “Dumbass,” and insisting he never considered attacking China.

Still, he said that if the report was true, “I assume he would be tried for TREASON in that he would have been dealing with his Chinese counterpart behind the President’s back and telling China that he would be giving them notification ‘of an attack.’ Can’t do that!”

“Actions should be taken immediately against Milley,” Trump said.

Milley believed the president suffered a mental decline after the election, agreeing with a view shared by House Speaker Nancy Pelosi in a phone call they had Jan. 8, according to officials. Milley also asked senior officers to swear an “oath” that Milley had to be involved if Trump gave an order to launch nuclear weapons, according to the book.

In the statement Wednesday, Milley’s spokesman said Milley had conferred with the senior officers about nuclear weapons protocols “to remind uniformed leaders in the Pentagon of the long-established and robust procedures in light of media reporting on the subject.” Butler, the spokesman, appeared to be referring to news reports of the Jan. 8 Milley-Pelosi phone call. Butler did not address whether Milley had insisted he be part of the nuclear weapons procedures.

Pelosi had previously said she spoke to Milley that day about “available precautions” to prevent Trump from initiating military action or ordering a nuclear launch, and she told colleagues she was given unspecified assurances that there were longstanding safeguards in place.

Milley, according to the book, called the admiral overseeing the U.S. Indo-Pacific Command, the military unit responsible for Asia and the Pacific region, and recommended postponing upcoming military exercises.

It’s not clear what, if any, military exercises were actually postponed. But defense officials said it is more likely that the military postponed a planned operation, such as a freedom of navigation transit by a U.S. Navy ship in the Pacific region. The defense officials spoke on condition of anonymity to discuss private conversations.

In response to the book, Sen. Marco Rubio, R-Fla., sent Biden a letter Tuesday urging him to fire Milley, saying the general worked to “actively undermine the sitting Commander in Chief.”

Sen. Ted Cruz, R-Texas, called the report “deeply concerning,” telling reporters at the Capitol, “I think the first step is for General Milley to answer the question as to what exactly he said.”

Sen. Dick Durbin, D-Ill., said he had no concerns that Milley might have exceeded his authority, telling reporters that Democratic lawmakers “were circumspect in our language but many of us made it clear that we were counting on him to avoid the disaster which we knew could happen at any moment.”