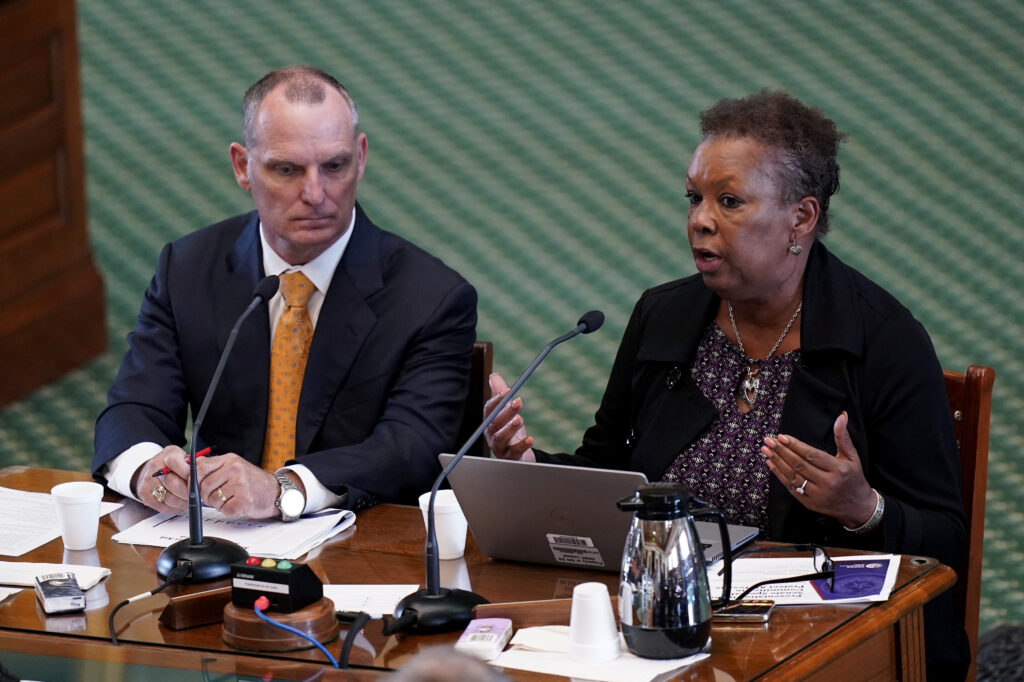 The Texas legislature is holding hearings to determine why law enforcement was slow to enter the Uvalde elementary school to stop a mass shooter, and the hearings are not focusing the type of weapon that was used or gun control. Texas is a Second Amendment friendly state, where people believe the solution to stopping mass shootings is found by taking other types of action, such as arming school staff. The Associated Press has the story:

AUSTIN, Texas (AP) — The first public hearings in Texas looking into the Uvalde school massacre have focused on a cascade of law enforcement blunders, school building safety and mental health care with only scant mentions of the shooter’s AR-15-style semi-automatic rifle and gun reform.

A day after the head of the Texas state police called the law enforcement response to the May 24 slaughter an “abject failure,” Texas senators on Wednesday turned their attention to mental health funding for schools and a shortage of counselors and mental health providers.

Only near the end of Wednesday’s hearing in the Texas Capitol was there much talk about gun laws. And even then it received little acknowledgement.

The bungled response to the attack that left 19 children and two teachers dead at Robb Elementary has infuriated the nation, and a recent wave of deadly mass shootings has renewed a push for more gun laws. By week’s end, the U.S. Senate could pass new legislation that would toughen background checks for the youngest firearms buyers and require more sellers to conduct background checks.

But the Republican-dominated committee examining the tragedy in Uvalde appeared to have little appetite for new guns laws, even after a series of mass shootings in Texas that killed more than 85 people in the past five years — at an El Paso Walmart, a church in Sutherland Springs, a Santa Fe High School outside Houston and in West Texas oil country.

The state’s Republican-controlled legislature has spent the last decade chipping away at restrictions. Texas doesn’t require a permit to carry a long rifle like the one used in Uvalde. Last year, lawmakers made it legal for anyone 21 and older to carry a handgun in public without a license, background check or training.

“I’ve never seen anything like this past month in terms of the outrage, despair and heartbreak,” Golden said. “Texas is facing a crisis, one we know we’ve faced a long time.”

She got no questions from the Republican lawmakers on the panel.

“We are tired of these do-nothing committees and roundtables that have been happening after every mass shooting in Texas,” said Melanie Greene of Austin. “They talk about what went wrong and it’s usually everything but guns. We’re tired of all the talk and we want some action.”

Among the changes the group wants is raising the age of gun ownership from 18 to 21 years old. The gunman at Robb Elementary was an 18-year-old former student, Salvador Ramos.

Greene was not optimistic. “This committee is a dog-and-pony show. It’s performative political theater. But we’re not going to give up,” Greene said.

Republican Sen. Bob Hall tried to steer away from any talk about guns.

“It doesn’t take a gun. This man had enough time to do it with his hands, or a baseball bat. And so it’s not the gun, it’s the person,” Hall said Tuesday, as the hearings began in Austin, 160 miles (260 kilometers) from Uvalde.

Sen. Royce West, one of the Senate panel’s Democrats, said that “without having a discussion about those rights and limits associated therewith, this will be an incomplete discussion.”

Still, it’s the delays and mistakes in the law enforcement response at Robb Elementary School that are the focus of federal, state and local investigations.

Steve McCraw, director of the Texas Department of Public Safety, said Tuesday that police had enough officers and firepower at the school to stop Ramos three minutes after he entered the building but they instead waited more than an hour before storming the classroom and killing him.

McCraw outlined a series of missed opportunities, communication breakdowns and errors based on an investigation that has included roughly 700 interviews. He also directed much of the blame at Pete Arredondo, the Uvalde school district police chief who McCraw said was the commander in charge.

Arredondo, who testified Tuesday at a closed-door hearing of a Texas House committee, has said he didn’t consider himself in charge and assumed someone else had taken control. He has declined repeated requests for comment from The Associated Press.

Uvalde’s mayor pushed back on McCraw’s casting blame on Arredondo, saying the Department of Public Safety has repeatedly put out false information about the shooting and glossed over the role of its own officers.

Public pressure has grown for state and local officials to release more information.

On Wednesday, state Sen. Roland Gutierrez, who represents Uvalde, filed a lawsuit seeking to force the Texas Department of Public Safety to turn over records related to its investigation into the shooting. The victims’ families “deserve to know the complete, unalterable truth about what happened that day,” a lawyer for the Democrat wrote in the suit.

By JIM VERTUNO and JAKE BLEIBERG

Previous Article
Minority women lagging in sports despite Title IX
Next Article
Olympics ban transgender women in swimming, other sports may be next