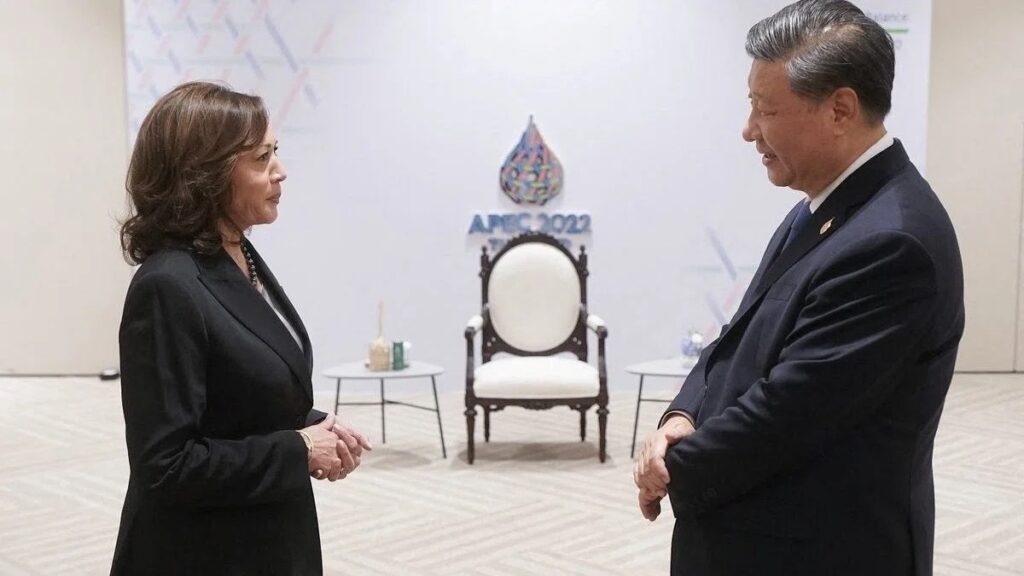 Harris and Xi exchanged remarks Saturday while heading into a closed-door meeting at the Asia-Pacific Economic Cooperation forum’s summit in Bangkok.

“I greeted President Xi before the APEC Leaders Retreat,” Harris wrote on Twitter. “I noted a key message that President Biden emphasized in his November 14 meeting with President Xi: we must maintain open lines of communication to responsibly manage the competition between our countries.”

Their exchange closely echoed Biden’s comment to Xi at an meeting between the two leaders earlier in the week about China and the U.S. keeping lines of communication open.

A brief statement from China’s Foreign Ministry also referenced the Biden-Xi meeting at the Group of 20 summit in Bali, Indonesia, which it described as “strategic and constructive” with “major significance in guiding the next stage of China-US relations.” It said it hoped the vice president will play an active role in working with China to promote the two nations’ relations “to return to a healthy and stable track.”

Relations between Washington and Beijing have suffered frictions over trade and technology, China’s claims to the separately governed island of Taiwan, the pandemic and China’s handling of Hong Kong, human rights and other issues.

Harris later took part in a handover ceremony in which Thai Prime Minister Prayuth Chan-ocha handed over chairmanship of APEC to the United States, which will host the group’s meetings next year.

She told the leaders present for the ceremony that the United States would continue to focus APEC on sustainable economic growth, building on the strong foundation Thailand set this year with new ambitious sustainability goals.

She also touted her home state, California, saying “there is no better place to host APEC 2023 than California, a state known for economic innovation.”

“Our host year will demonstrate the enduring economic commitment of the United States to the Indo-Pacific,” said Harris.

“As I have made clear throughout my time in Bangkok: under our administration, the United States is a strong partner for the economies and companies of the Indo-Pacific, and we are working to strengthen our economic relationships throughout the region, including by increasing two-way trade flows and the free flow of capital, which supports millions of American jobs.”

On Friday, Harris pitched the U.S. as a reliable economic partner, telling a business conference on APEC’s sidelines, “The United States is here to stay.”

Harris told leaders at the APEC summit that the U.S. is a “proud Pacific power” and has a “vital interest in promoting a region that is open, interconnected, prosperous, secure and resilient.”

After receiving news that North Korea had fired an intercontinental ballistic missile that landed near Japanese waters, Harris convened an emergency meeting of the leaders of Japan, South Korea, Australia, New Zealand and Canada in which she slammed the missile test as a “brazen violation of multiple U.N. Security resolutions.”

“It destabilizes security in the region and unnecessarily raises tensions,” she said.

“We strongly condemn these actions and again call on North Korea to stop further unlawful, destabilizing acts,” Harris said. “On behalf of the United States I reaffirmed our ironclad commitment to our Indo-Pacific alliances.”

Her remarks at the broader APEC forum capped a week of high-level outreach from the U.S. to Asia as Washington seeks to counter growing Chinese influence in the region, with President Joe Biden pushing the message of American commitment to the region at the Association of Southeast Asian Nations summit in Cambodia and the G-20 meeting in Indonesia.

Many Asian countries began questioning the American commitment to Asia after former President Donald Trump pulled the U.S. out of the Trans-Pacific Partnership trade deal, which had been the centerpiece of former President Barack Obama’s “pivot” to Asia.

The Biden administration has been seeking to regain trust and take advantage of growing questions over strings attached to Chinese regional infrastructure investments that critics have dubbed Beijing’s “debt trap” diplomacy.

After the APEC meeting, Harris also met with with Thai Prime Minister Prayuth Chan-ocha. Details of their talk were not immediately available, but had been expected to cover global and regional issues, such as the war in Ukraine and the crisis in Thailand’s neighbor Myanmar, where a military takeover last year triggered what amounts to a civil war and a humanitarian crisis.

In addition to economic issues, the two were expected to talk about the close and long-term security alliance between Thailand and the United States.

Earlier, Harris announced a spree of initiatives to extend bilateral cooperation on climate change and economic growth, as well as to tackle drug trafficking and cybercrime in the Southeast Asia region, both alarmingly on the rise.

Harris launched a series of partnerships with Thailand aimed at driving down emissions, advancing clean energy goals and promoting sustainable development, among other matters.