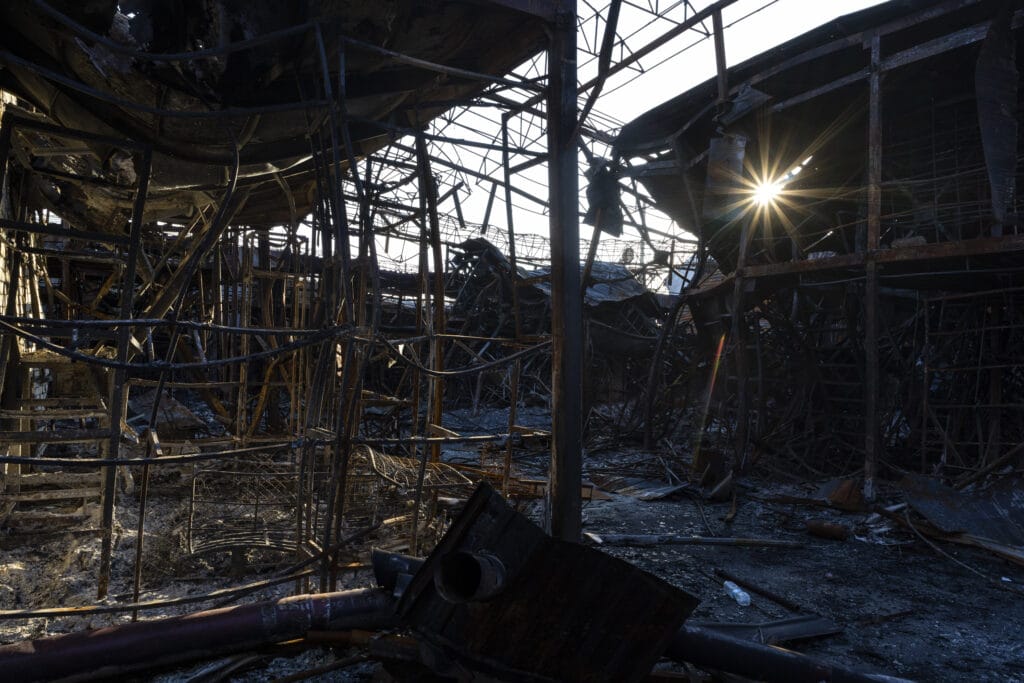 Mariupol, which the Russians recently claimed full control over, has endured some of the worst suffering of the war and became a worldwide symbol of defiance for the diehard defense put up by Ukrainians fierce fighting spirit and willingness to sacrifice, if need be, to save their homeland. The discovery of the bodies came shortly after Ukrainian President Volodymyr Zelenskyy accused Russia of waging “total war,” seeking to inflict as much death and destruction and terror as possible on his country. As reported by the AP:

The Kremlin is now focused on the eastern industrial heartland of the Donbas, where Russian forces have intensified their efforts

KYIV, Ukraine (AP) — Workers digging through rubble found 200 bodies in Mariupol, Ukrainian authorities said Tuesday, another grim discovery in the ruined port city that has seen some of the worst suffering of the 3-month-old war.

The bodies found in the basement of a collapsed apartment building were in a state of decomposition and a stench permeated the neighborhood, said Petro Andryushchenko, an adviser to the city’s mayor.

Mariupol, which the Russians recently claimed full control over, has endured some of the worst suffering of the war and became a worldwide symbol of defiance for the diehard defense put up for months by fighters at a steelworks.

The announcement of the discovery of the bodies came shortly after Ukrainian President Volodymyr Zelenskyy accused Russia of waging “total war,” seeking to inflict as much death and destruction as possible on his country.

“Indeed, there has not been such a war on the European continent for 77 years,” Zelensky told Ukrainians Thursday night, on the eve of the three-month anniversary of the start of the war.

He pointed to a missile attack that killed 87 people last week in the town of Desna, 55 kilometers (35 miles) north of Kyiv, one of the deadliest single strikes in the war.

“And it was only four missiles,” he said, noting the many hundreds of such strikes since the beginning of the war on Feb. 24.

The conflict began with expectations that Russia might overtake the country in a blitz lasting only days or a few weeks. But stiff Ukrainian resistance, bolstered by Western weapons, has bogged down Moscow’s troops, forcing them to pursue more a limited objective.

The Kremlin is now focused on the eastern industrial heartland of the Donbas, where Russian forces have intensified efforts to encircle and capture Sievierodonetsk and neighboring cities, British military authorities said Tuesday. That’s the only part of the Donbas’ Luhansk region that remains under Ukrainian government control.

Russian forces have achieved “some localized successes” despite strong Ukrainian resistance along dug-in positions, the U.K. Defense Ministry said, but the fall of Sievierodonetsk and the area around it may cause logistical problems for the Russians.

In its effort to secure a victory in the Donbas, Moscow has withdrawn some forces from around Ukraine’s second-largest city of Kharkiv.

There, residents lined up for rations of tea, sugar, pasta and cereal, holding out plastic bags to receive cups of flour and other supplies.

Meanwhile, a Russian-installed official in Ukraine’s Kherson region said the pro-Kremlin administration will ask Moscow to set up a military base there.

“It is vitally important and will become a security guarantee for the region and its residents,” said Kirill Stremousov, deputy head of the administration.

Ukrainian officials have speculated Russia plans to stage a referendum in the region to declare its independence, similar to ones held years ago in the Donetsk and Luhansk regions of the Donbas. Moscow recognized the self-proclaimed Donetsk and Luhansk republics two days before invading Ukraine, using that as a pretext to send troops to its ex-Soviet neighbor.

Instead, Stremousov said the region would ask the Kremlin to make it part of Russia. Kremlin spokesman Dmitry Peskov has said it is up to the people of Kherson to decide how and where they want to live.

Meeting in Tokyo with fellow leaders in the Indo-Pacific security coalition known as the Quad, President Joe Biden said Tuesday that Russia’s war in Ukraine had brought a “dark hour in our shared history.”

Becatoros reported from Kramatorsk, Ukraine. Journalists Yuras Karmanau in Lviv, Andrea Rosa in Kharkiv, Danica Kirka in London and other staffers around the world contributed.