Will the abortion decision expand to leaving LGBTQ issues up to states? 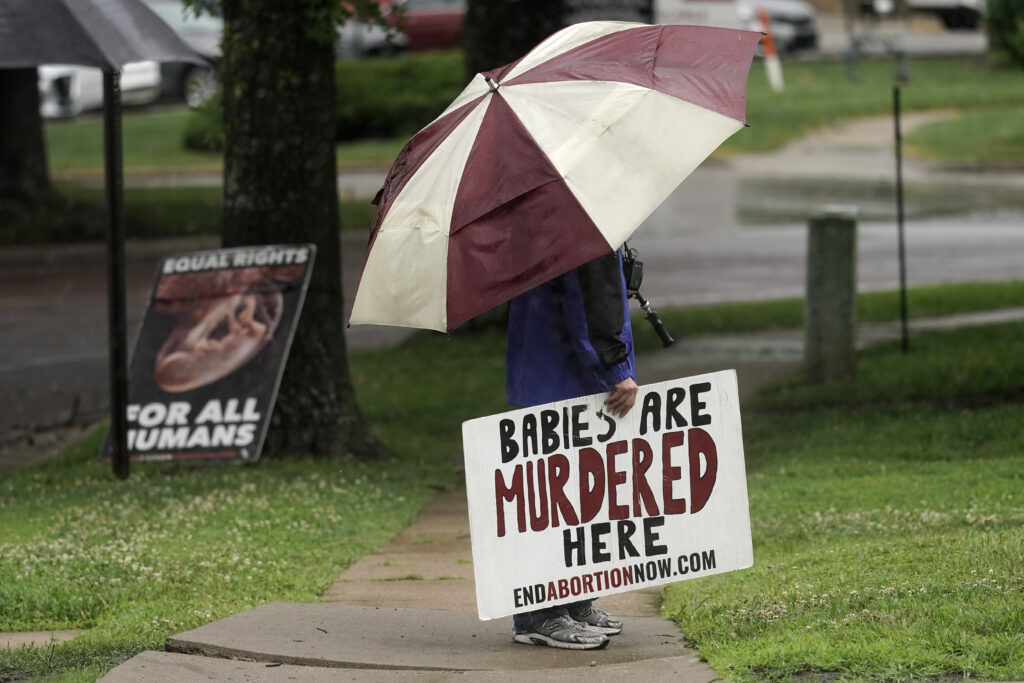 Some are warning that the Supreme Court’s opinion reversing Roe v. Wade will establish a precedent to be followed in regards to other political issues, such as gay marriage. Justice Clarence Thomas said in a concurring opinion that the court should review other precedents, including its 2015 decision legalizing same-sex marriage. The Associated Press has the story:

(AP) The U.S. Supreme Court’s decision allowing states to ban abortion stirred alarm Friday among LGBTQ advocates, who feared that the ruling could someday allow a rollback of legal protections for gay relationships, including the right for same-sex couples to marry.

In the court’s majority opinion overturning the 1973 Roe v. Wade decision, Justice Samuel Alito said the decision applied only to abortion. But critics of the court’s conservative majority gave the statement no credence.

“I don’t buy that at all,” said Lawrence Gostin, a professor of medicine at Georgetown University and director of its Institute for National and Global Health Law. “It really is much more extreme than the justices are making it out to be.”

He added: “It means that you can’t look to the Supreme Court as an impartial arbiter of constitutional rights because they’re acting more as culture warriors.”

Gostin and others pointed to a separate concurring opinion in which Justice Clarence Thomas said the court should review other precedents, including its 2015 decision legalizing same-sex marriage, a 2003 decision striking down laws criminalizing gay sex and a 1965 decision declaring that married couples have a right to use contraception.

“Let’s just be clear. Today is about this horrifying invasion of privacy that this court is now allowing, and when we lose one right that we have relied on and enjoyed, other rights are at risk,” said Jim Obergefell, the plaintiff in the landmark ruling legalizing same-sex marriage, who is now running as a Democrat for the Ohio House.

Abortion opponents celebrated the potential for states to ban abortion after nearly 50 years of being prevented from doing so. Some argued that the case did not have implications beyond that, noting Alito’s words.

“And to ensure that our decision is not misunderstood or mischaracterized, we emphasize that our decision concerns the constitutional right to abortion and no other right,” Alito wrote. “Nothing in this opinion should be understood to cast doubt on precedents that do not concern abortion.”

Kristen Waggoner, legal director for the Alliance Defending Freedom, which helped defend the Mississippi abortion law at issue in the ruling, said the high court’s decision makes it clear that “the taking of human life is unlike any other issue.” She said raising other issues shows the weakness of critics’ arguments about abortion.

Still, said Paul Dupont, a spokesman for the conservative anti-abortion American Principles Project, conservatives are optimistic about the potential for future victories on cultural issues, though getting more states to ban abortion is “a huge enough battle.”

“If there is a thought that this could apply elsewhere, you know, they’re not going to say it here, and we’re just going to have to see,” Dupont said.

Other factors could protect those rulings on birth control and LGBTQ rights, too. The Obergefell decision that legalized same-sex marriage was based on equal protection, and hundreds of thousands of couples have relied on it to wed, a precedent that many courts would be loath to disturb.

Still, a sharp increase in anti-LGBTQ rhetoric in the U.S. and opposition to specific kinds of birth control on the right have advocates concerned that those rights are vulnerable.

Some abortion opponents treat some forms of contraception as forms of abortion, particularly IUDs and emergency birth control such as Plan B, also known as the “morning after” pill. Lawmakers in Idaho and Missouri last year discussed banning state funding for emergency contraception, and Idaho prevents public schools or universities from dispersing it.

“It’s all interconnected, because at its base, birth control and abortion are both types of health care that help people have bodily autonomy,” said Mara Gandal-Powers, director of birth control access for the National Women’s Law Center, which supports abortion rights. “I’m very concerned about where this is going to go.”

The Supreme Court’s three most liberal members argued that the majority decision “breaches a core rule-of-law principle, designed to promote constancy in the law” and “places in jeopardy” other rights.

At the White House, President Joe Biden pledged to do everything in his power to defend a woman’s right to have an abortion in states where it will be banned. He warned that the ruling could undermine rights to contraception and gay marriage: “This is an extreme and dangerous path.”

Then there is Thomas’ concurring opinion, which Sarah Warbelow, legal director for the pro-LGBTQ-rights Human Rights Campaign, called an invitation for “stirring up fringe organizations, fringe politicians who want to harm the LGBTQ community.”

“There are clearly members of the court who have an outdated notion of what America looks like today and have a fantasy of returning to their painted idealism of a 1940s, 1950s America, certainly not what it really was in the 1940s and ’50s,” she said. “And that is terrifying.”

“They are sending signals to the conservative legal movement, which has a lot of momentum right now because of this victory, to keep going and to keep bringing cases to them over the next several years that will give them opportunities to go further,” Pierceson said.

Connecticut Attorney General William Tong, a Democrat, called the decision “dangerous” and warned that it carves the nation into two parts. He predicted there will be “a tsunami of radical litigation and legislation aimed at further eroding rights we have taken for granted.”

“Make no mistake — this is just the beginning of a systematic right-wing effort to rewrite decades of bedrock legal precedent,” he said.