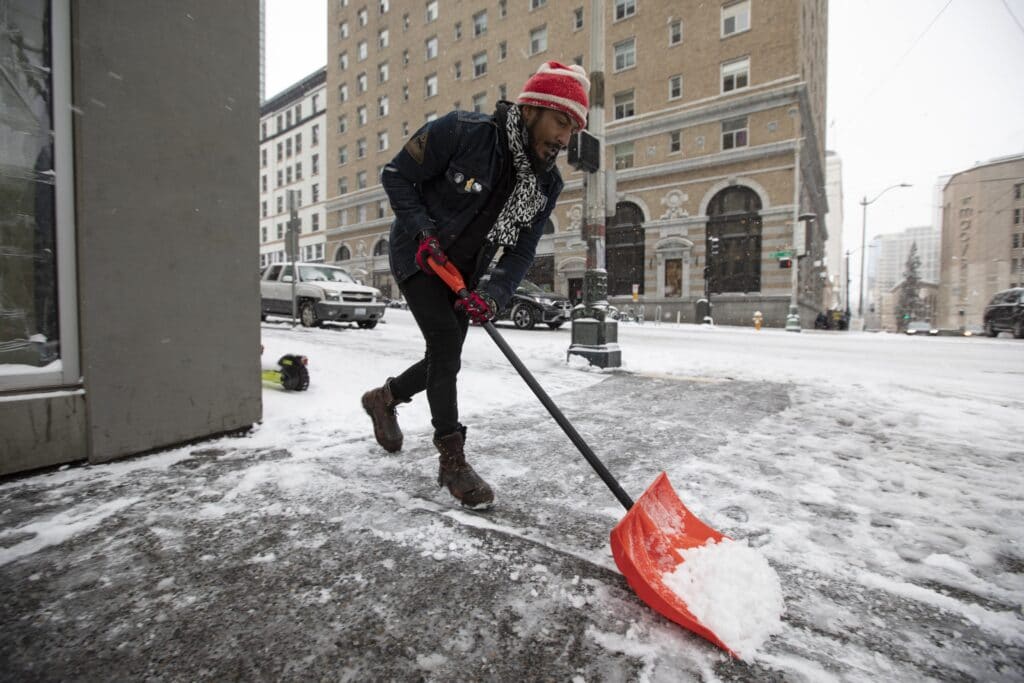 Turbulent weather stretched from San Diego to Seattle, dumping snow and bringing well below freezing temperatures to regions that seldom see snow this time of year. More than a foot (0.3 meters) of snow was reported near Port Angeles in Washington state’s Puget Sound region, as snow and deep freeze temps made travel treacherous. As reported by the AP:

The California Department of Transportation also closed many other roads while warning of freezing, slippery conditions for motorists

COLFAX, Calif. (AP) — A major Christmas weekend storm caused whiteout conditions and closed key highways amid blowing snow in mountains of Northern California and Nevada, with forecasters warning that travel in the Sierra Nevada could be difficult for several days.

Authorities near Reno said three people were injured in a winter 20-car pileup on Interstate 395, where drivers described limited visibility on Sunday. Further west, a 70-mile (112-kilometer) stretch of Interstate 80 was shut until at least Monday from Colfax, California, through the Lake Tahoe region to the Nevada state line.

The California Department of Transportation also closed many other roads while warning of slippery winter conditions for motorists.

“Expect major travel delays on all roads,” the National Weather Service office in Reno, Nevada, said Sunday on Twitter. “Today is the type of day to just stay home if you can. More snow is on the way too!”

The weather service issued a winter storm warning for greater Lake Tahoe until 1 a.m. Tuesday because of possible “widespread whiteout conditions” and wind gusts that could top 45 mph (72 kph).

Turbulent winter weather stretched from San Diego to Seattle. More than a foot (0.3 meters) of snow was reported near Port Angeles on Washington state’s Puget Sound. Portland, Oregon received a dusting, but the city was expected to get another 2.5 inches (6 centimeters) by Monday morning, according to the weather service.

In California, rockslides caused by heavy winter rain closed more than 40 miles (64 kilometers) of coastal Highway 1 in the Big Sur region south of the San Francisco Bay Area. There was no estimate for the reopening of the scenic stretch that is frequently shut after wet weather.

The latest in a series of winter blustery storms hit Southern California with heavy rain and wind that flooded streets and knocked down power lines late Saturday. Powerful gusts toppled trees, damaged carports and blew a track-and-field shed from a Goleta high school into a front yard two blocks away, according to the Santa Barbara County Fire Department. No injuries were reported.

“Cancellations and delays are possible, so it will be important to check your flight status today if flying through Terminal 5,” LAX tweeted.

In the San Bernardino Mountains east of Los Angeles, crews were repairing a section of State Route 18 that washed down a hillside after heavy rain late Thursday. The closure of the major route into the Big Bear ski resort area could last for weeks, officials said.

The continuing storms were welcomed in parched California, where the Sierra snowpack had been at dangerously low levels after weeks for dry weather. But the state Department of Water Resources reported on Christmas Eve that the snowpack was between 114% and 137% of normal across the range with more snow expected.

Up to 8 feet (2.4 meters) of snow was predicted at the highest elevations of the Sierra.

Before Sunday, 20 inches (50 centimeters) of snow already had fallen at Homewood on Lake Tahoe’s west shore. About a foot (30 centimeters) was reported at Northstar near Truckee, California, and 10 inches (25 centimeters) at the Mount Rose ski resort on the southwest edge of Reno.

Previous Article
Life in the Iron Box. Part 4: The Forbidden Question Traps
Next Article
Cowboys celebrate with 56-14 whopping of Washington