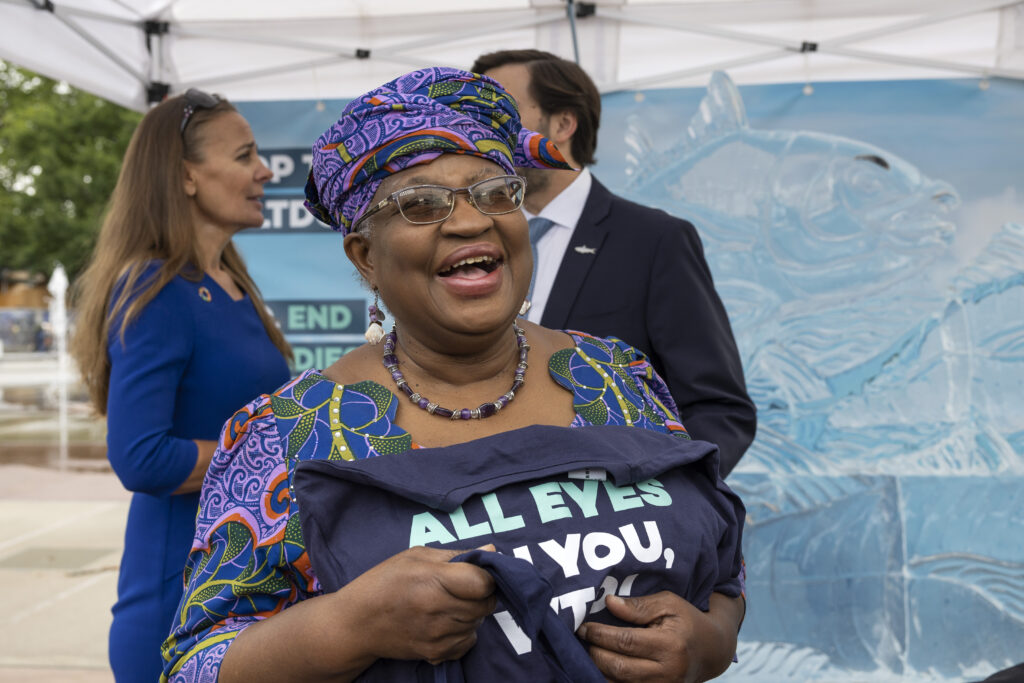 For the first time in 4 1/2 years, after a pandemic pause, government ministers from WTO countries will gather for four days starting Sunday to tackle issues like overfishing of the seas. Facing a key test of her diplomatic skill since taking the job 15 months ago, WTO Director-General Ngozi Okonjo-Iweala in recent days expressed “cautious optimism” that progress could be made on at least one of four issues expected to dominate the meeting: fisheries subsidies, agriculture, and the pandemic. As reported by the AP:

GENEVA (AP) — The World Trade Organization is facing one of its most dire moments, the culmination of years of slide toward oblivion and ineffectiveness. Now may be a chance to turn the tide and reemerge as a champion of free and fair trade — or face a future further in doubt.

For the first time in 4 1/2 years, after a pandemic pause, government ministers from WTO countries will gather for four days starting Sunday to tackle issues like overfishing of the seas, COVID-19 vaccines for the developing world and food security at a time when Russia’s war in Ukraine has blocked the export of millions of tons of Ukrainian grain to developing nations.

Facing a key test of her diplomatic skill since taking the job 15 months ago, WTO Director-General Ngozi Okonjo-Iweala in recent days expressed “cautious optimism” that progress could be made on at least one of four issues expected to dominate the meeting: fisheries subsidies, agriculture, the pandemic response and reform of the organization, spokesman Fernando Puchol said.

Diplomats and trade teams have been working “flat out — long, long hours” to serve up at least one “clean text” for a possible agreement — that ministers can simply rubber-stamp and not have to negotiate — on one of those issues, Puchol told reporters Friday.

“It’s difficult to predict a result right now,” he said.

The Geneva-based body, barely a quarter-century old, brings together 164 countries to help ensure smooth and fair international trade and settle trade disputes. Some outside experts expect few accomplishments out of the meeting, saying the main one may simply be getting the ministers to the table.

“The multilateral trading system is in a bad way. The Ukraine situation is not helping,” said Clemens Boonekamp, an independent trade policy analyst and former head of WTO’s agricultural division. “But the mere fact that they are coming together is a sign of a respect for the system.”

They might reach an agreement, he said, to help relieve a looming global food crisis arising from the war in Ukraine by ensuring the U.N. World Food Program receives a waiver from food export bans imposed by WTO countries eager to feed their own people.

Wolff, now senior fellow at the Peterson Institute for International Economics in Washington, expressed confidence in Okonjo-Iweala, saying, “I’m not willing to sell her short.”

He said members “seem to be making progress” on an agreement to scale back subsidies that encourage overfishing — something they have been trying to do for more than two decades.

“Do they wrap it up this time?” Wolff asked. “Unclear. It’s been a drama.”

One problem — among many — is that the WTO operates by consensus, so any one of its 164 member countries could gum up the works.

In short, the WTO has become an important diplomatic battleground between developed and developing countries, and some experts say reform is needed if it’s ever to get things done.

The trade body, created in 1995 as a successor to the General Agreement on Tariffs and Trade, has seen a slow unraveling. It hasn’t produced a major trade deal in years. The last big success was a 2014 agreement billed as a boost to lower-income countries that cut up red tape on goods clearing borders.

Years ago, the United States started clamping down on the WTO’s appeals court, which in theory delivers the last word on trade disputes, such as a high-profile one between the U.S. and EU involving plane-making giants Airbus and Boeing.

Then, U.S. President Donald Trump came along, threatening to pull America out of the WTO over his insistence that it was unfair to the U.S. In the end, he didn’t, and simply bypassed the WTO — slapping sanctions on allies and foes alike and ignoring the trade organization’s rulebook and dispute-resolution system.

Once a champion of the WTO, the United States has ruled the admission of China and insists Beijing has been violating the trade body’s rules too much. The U.S. accuses China of excessively supporting state-run companies and impeding free trade, among other things. China denies those allegations.

A generation ago, the WTO drew huge, vituperative, even violent protests — notably from anti-globalists and anarchists who detested its closed-door secrecy and elites-decide-all image.

William Reinsch, a former U.S. trade official, warned that the WTO is now in danger of becoming irrelevant. The best way to show that it still matters, he wrote this month, is to negotiate an agreement, perhaps on fisheries, COVID-19 vaccines, or a more difficult issue: encouraging more free trade in farming.

Reinsch, now at the Center for Strategic and International Studies in Washington, said the United States needs to be doing more — including making compromises — to ensure the WTO can reach agreement on contentious issues.

“The future of the WTO is at risk,” he said. “Failure would be bad for the fish and the farmers, but it would also be bad for a rule-of-law-based global economy.”

Economics Writer Paul Wiseman contributed to this report from Washington.