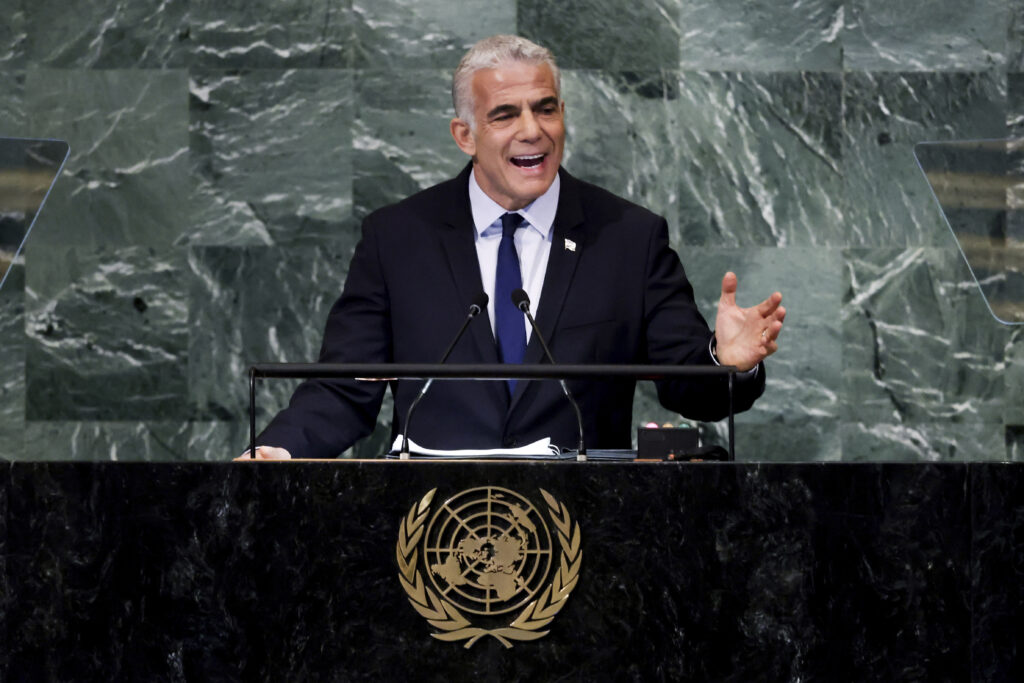 On Thursday, Israel’s prime minister, Yair Lapid, delivered a speech focused on the Palestinians and included a call for the establishment of a Palestinian state.
“An agreement with the Palestinians, based on two states for two peoples, is the right thing for Israel’s security, for Israel’s economy and for the future of our children,” Lapid said.
The speech, coming ahead of Nov. 1 elections, appeared to be part of an effort by Lapid to portray himself — both to voters and global leaders — as a statesman and moderate alternative to his main rival, hardline former Prime Minister Benjamin Netanyahu.
But it was short on details, and there is virtually no chance Lapid, who has long supported a two-state solution, will get to push forward with his vision. Israel’s parliament is dominated by parties that oppose Palestinian independence, and opinion polls forecast a similar result after the upcoming elections.
The Palestinians seek the West Bank, east Jerusalem and the Gaza Strip — territories captured by Israel in 1967 — for an independent state, a position that enjoys wide international support.

If that condition is met then the best path  forward is “an agreement with the Palestinians, based on two states for two peoples,” Lapid said.

His statement about a future Palestinian state and his affirmation of a two-state resolution to the conflict, markers the strongest language that an Israeli premier has used with regard to Palestinian sovereignty since the days of former Prime Minister Ehud Olmert. It is the first since 2016 that an Israeli leader has spoken of the two-state solution when addressing the UNGA.

“Despite all the obstacles, still today a large majority of Israelis support the vision of this two-state solution. I am one of them,” Lapid said.

“We have only one condition: That a future Palestinian state will be a peaceful one.

That it will not become another terror base from which to threaten the well-being, and the very existence of Israel,” Lapid said.

“Peace is not a compromise. It is the most courageous decision we can make.