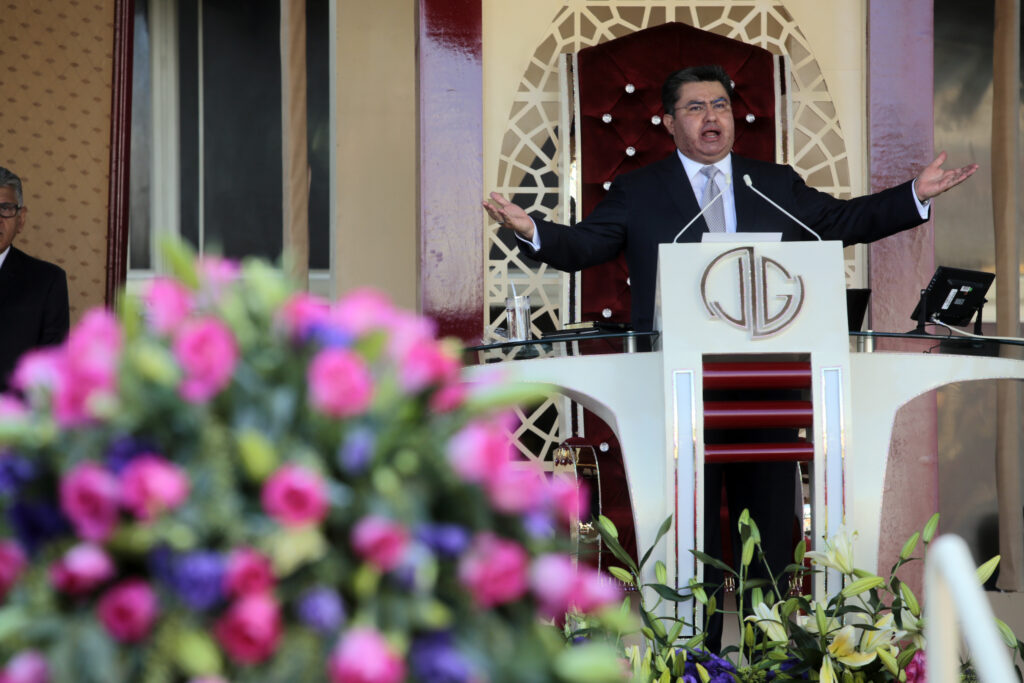 Naasón Joaquín García, 53, who is considered the “apostle” of Jesus Christ by his 5 million worldwide followers, has pleaded guilty to sexually abusing three girls. The church youth group leader would direct teenage girls in skimpy outfits to perform flirty dances for him, and conducted nude photo shots of them. The Associated Press has the story:

LOS ANGELES (AP) — The leader of a Mexican megachurch faces more than 16 years in a California prison when sentenced Wednesday for sexually abusing three girls who were followers.

Naasón Joaquín García, 53, who is considered the “apostle” of Jesus Christ by his 5 million worldwide followers, had vigorously fought charges that included child rape, until abruptly accepting a plea deal on the eve of trial.

The La Luz del Mundo church leader pleaded guilty Friday in Los Angeles Superior Court to two counts of forcible oral copulation involving minors and one count of a lewd act upon a child who was 15.

Prosecutors said he used his spiritual influence to have sex with several female followers and was aided by others in the church who facilitated the abuse.

Church youth group leader Alondra Ocampo, who previously pleaded guilty to abusing the girls, was charged with directing teenage girls in skimpy outfits to perform “flirty” dances for García. She also conducted nude photo shoots for García in which the girls touched each other, according to the charges.

Ocampo told girls that if they rebuffed the wishes and desires of “the apostle,” they were going against God, according to the charges.

García told the girls after they danced for him that a king could have mistresses and that “an apostle of God can never be judged for his actions,” according to the charges against him.

Ocampo was prepared to testify against him, her attorney Fred Thiagarajah said.

“She actively recruited and groomed girls for him,” Thiagarajah said. “She would target girls and bring them into his inner fold. She was tasked with sexualizing these girls and facilitating their abuse.”

García had been scheduled to go on trial Monday on 19 counts that also included allegations of human trafficking to produce child pornography. A judge had thrown out four counts of extortion and sentencing enhancements for great bodily injury for lack of evidence.

Another female co-defendant who was a member of the church, Susana Medina Oaxaca, 27, pleaded guilty Friday to assault likely to cause great bodily injury, a misdemeanor.

Defense lawyers had said prosecutors were operating under a far-fetched legal theory that García used spiritual coercion for sexual pleasure.

“It is a fantasy seemingly invented out of whole cloth,” defense attorney Alan Jackson wrote in a court filing.

But prosecutors said the victims were essentially brainwashed by García and felt they would be ostracized by the insular church community if they didn’t submit to his desires. In denying a defense motion to dismiss the case, a judge said García used religion as “invisible handcuffs” to exploit his victims.

García’s grandfather founded the Guadalajara-based fundamentalist Christian church — known by its English name, The Light of the World — in 1926.

García took over as “apostle” after his father, Samuel Joaquín Flores, died in 2014.

Flores was also the subject of child sex abuse allegations in 1997, but authorities in Mexico never filed criminal charges.

The church has tried to cultivate a law-abiding, hard-working image in Mexico — where it counts about 1.8 million followers. Its male members favor suits and short hair, and female members wear veils that cover their hair and modest dresses. There are about 1 million U.S. members.