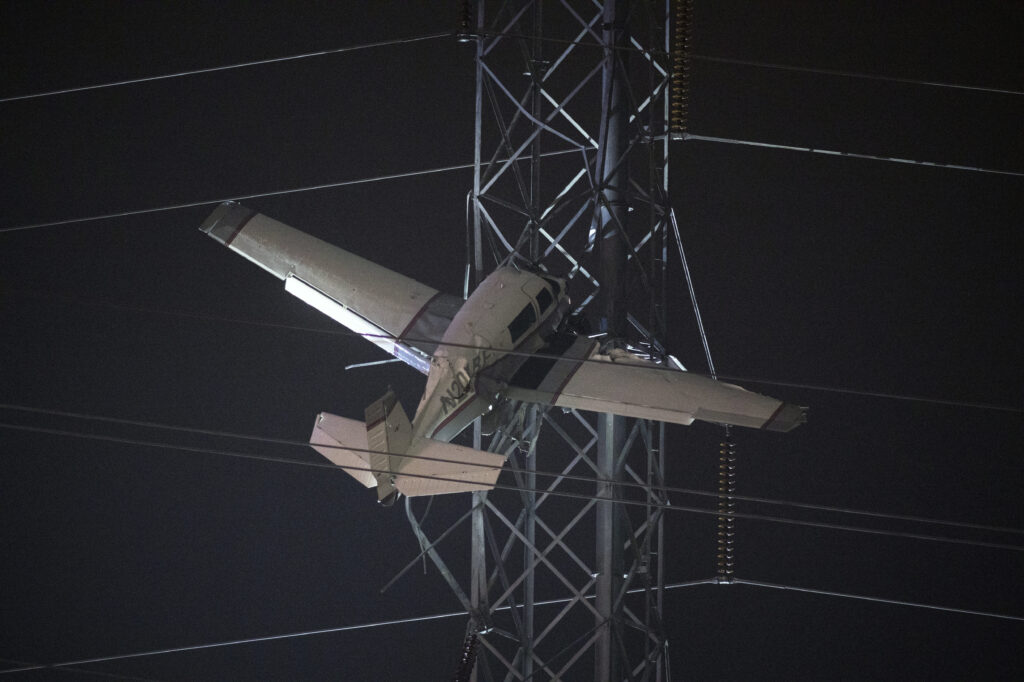 Two people were rescued Monday morning from a plane that was left dangling 100 feet in the air from power lines after it crashed in Montgomery County, Maryland, on Sunday night. Tens of thousands of Montgomery County, Maryland, customers were without power for hours after the plane crashed into an electrical tower. The Associated Press has the story:

Crews on Monday rescued the injured pilot and passenger of a small plane that crashed into a Maryland electricity transmission tower, knocking out power for tens of thousands of customers and leaving the aircraft dangling 10 stories off the ground.

The plane crashed into the tower that supports high-tension lines at around 5:40 p.m. Sunday and got stuck about 100 feet (30 meters) above the ground, Montgomery County Fire Chief Scott Goldstein said. The crash happened about a mile from the Montgomery County Airpark in Montgomery Village, a Washington, D.C., suburb. It knocked out power in the surrounding area and caused Metrorail delays.

Video from the scene showed numerous rescue personnel and vehicles surrounding the tower shortly after it happened. At the time of the crash, the conditions were misty and rainy, said Pete Piringer, a spokesperson for the county’s Fire & Rescue Service.

Piringer said the rescue was complicated by the fact that the lines were live when the plane hit.

After electrical workers made sure it was safe to try to reach the pilot and passenger, who were in contact with authorities via cellphone and were anxious to be rescued, crews secured the plane to the tower at around 12:15 a.m. Monday and took the two to safety a few minutes later, officials said.

The State Police identified the pilot as Patrick Merkle, 65, of Washington, D.C., and the passenger as Janet Williams, 66, of Marrero, Louisiana. Both had serious but non-life-threatening injuries, and hypothermia set in while they waited to be rescued, Goldstein said. Their rescue was faster than anticipated since the pilot and passenger were able to assist, he said.

The plane was later lowered to the ground revealing a crushed front end.

The single-engine Mooney M20J had departed White Plains, New York, the Federal Aviation Administration said in a statement. The FAA, National Transportation Safety Board and Maryland State Police are investigating.

The utility Pepco had reported that power was temporarily cut to about 120,000 customers in Montgomery County, but it was restored to most of them before the people were rescued.

The county’s public school system closed its schools and offices Monday due to the outage’s impact on safety and school operations.