$8 billion from Superstorm Sandy due to climate change 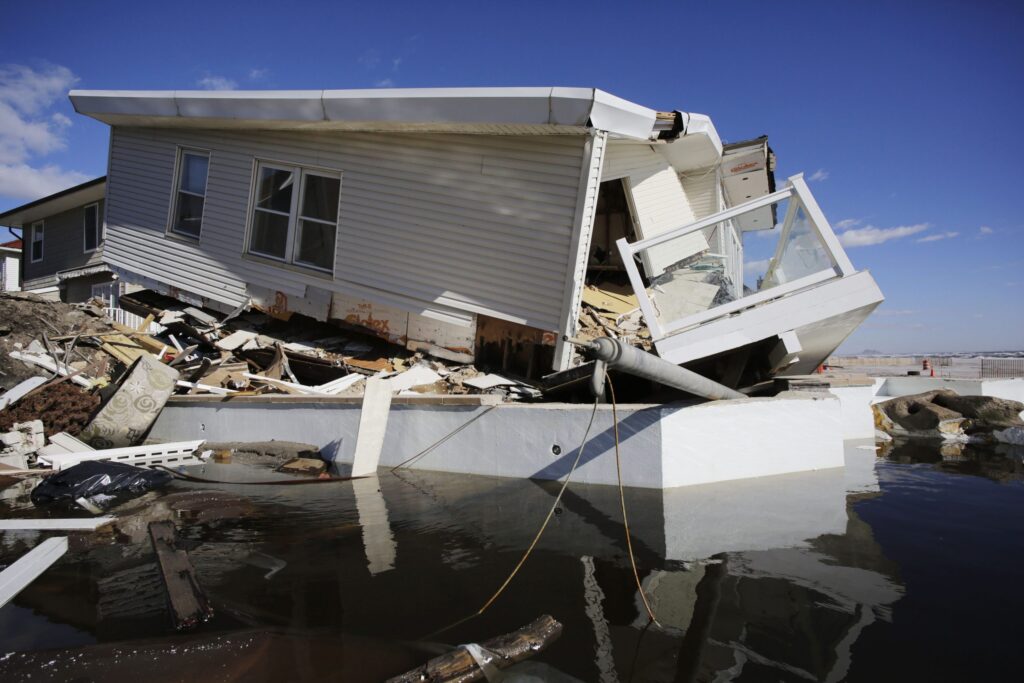 A new study in the journal Nature Communications asserts that manmade climate change was responsible for the sea rising 4% in 2012. Sandy killed 147 people and flooded 36,000 homes. The Associated Press has the story:

During Sandy — a late fall freak combination of a hurricane and other storms that struck New York and surrounding areas — the seas were almost 4 inches (9.6 centimeters) higher because of human-caused climate change, according to a study in Tuesday’s journal Nature Communications. Researchers calculated that those few inches caused 13% of Sandy’s overall $62.5 billion damage, flooding 36,000 more homes. Sandy killed 147 people, 72 in the eastern United States, according to the National Hurricane Center.

While past studies have determined global warming was a factor in extreme weather events, either by increasing the chance of them happening or making them stronger, the new study is one of the first to tally the human costs of climate change from the burning of coal, oil and natural gas.

“In most cases, flooding was made worse by sea level rise and we show how much worse,” said study co-author Philip Orton, a physical oceanographer at the Stevens Institute of Technology in New Jersey.

Orton said there were places, such as basement apartments in the New York City area, filled with water that would have been dry without human-caused sea level rise.

“There are people who experienced significant losses from Hurricane Sandy who would not have experienced those losses but for climate change,” said study lead author Ben Strauss, a sea level scientist who is CEO of Climate Central, a science-and-journalism venture.

To come up with its damage totals, the study first calculated how much of the storm surge — as much as 9 feet (2.7 meters) above the high tide line at the Battery in Manhattan — could be attributed to climate change.

Researchers did this by comparing 2012 observations to climate simulations of a world without global warming. They made calculations for sea level rise overall, then did it for each of the main contributors to sea level rise: warmer waters expanding and extra water from melting glaciers and ice sheets in Greenland and Antarctica.

The researchers determined globally seas in 2012 were 4.1 inches (10.5 centimeters) higher than in 1900 because of climate change, but the amount was slightly less in New York: 3.8 inches (9.6 centimeters).

The reason is that Alaska’s melting glaciers and Greenland’s melting ice sheet are relatively close to the East Coast and the physics of sea level rise puts the biggest increases on the opposite end of the globe from the biggest melts, said study co-author Bob Kopp, director of Rutgers University’s Institute of Earth, Oceans and Atmospheric Sciences.

Then the researchers looked at where the flooding was and what computer simulations showed would have happened with four inches (9.6 centimeters) less water. In some places, such as Howard Beach in Queens, it was a big deal, Orton said.

These calculations for sea level rise from climate change alone seem to make sense, said Steve Nerem, a scientist who studies sea rise at the University of Colorado and was not part of the research. Nerem said he wasn’t qualified to comment on the damage calculations but is a bit skeptical because 4 inches (9.6 centimeters) on such a large storm surge doesn’t seem so huge.

Susan Cutter, director of the University of South Carolina’s Hazards and Vulnerability Research Institute who also wasn’t part of the research, said the study’s damage estimates seem reasonable to her.

Study author Strauss pointed out that Hurricane Irene in 2011 showed that the first five feet (1.5 meters) of flooding doesn’t do nearly as much damage as what follows. Then, he said, the damage soars at an increasingly higher rate per inch.

One way to think about that, Strauss said, is the extra few inches can put enough water above a house’s lowest electrical outlet to require expensive fixes.

After Sandy, Fugate said, then-President Barack Obama turned to him and stated: “The debate on climate change is over, we must start talking about climate adaptation.”