92% of federal workers are now vaccinated 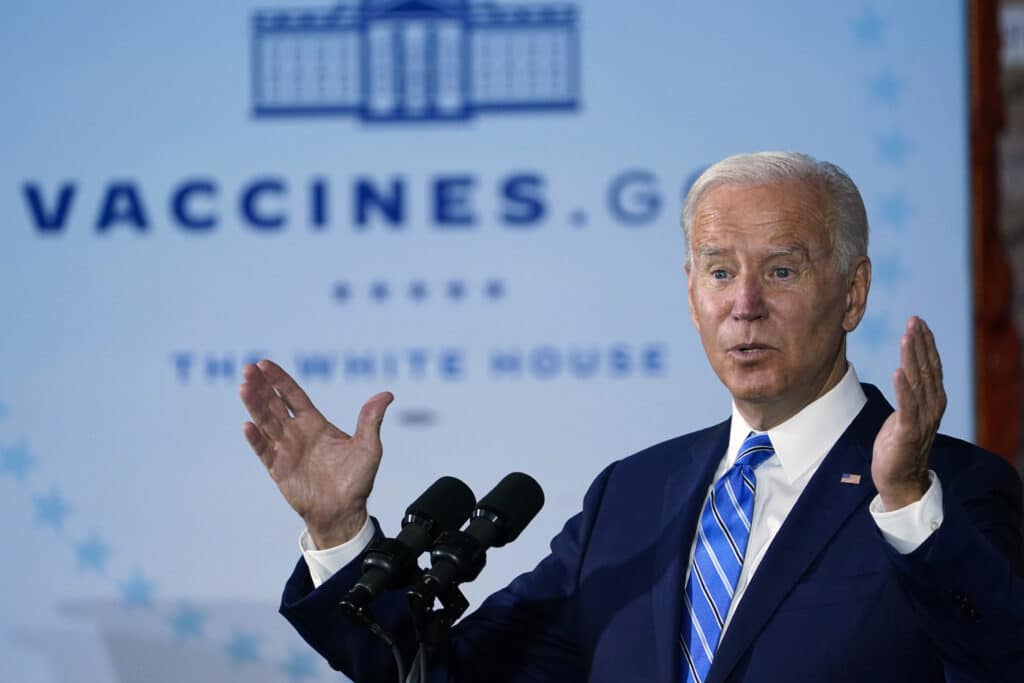 The Biden administration’s COVID-19 vaccine mandate has resulted in 92% of federal workers getting the jab. Those who don’t comply are being issued counseling letters and face possible termination for not complying. The Associated Press has the story:

WASHINGTON (AP) — The Biden administration’s vaccine mandate for millions of federal workers seems to be working, with no apparent disruption to law enforcement, intelligence-gathering or holiday travel.

On Tuesday, one day after the deadline for compliance, 92% of the 3.5 million federal workers covered by Biden’s mandate reported to the government that they are at least partially vaccinated, according to White House officials.

The highest number of partial vaccinations by Tuesday was at the Agency for International Development, which had 97.8%, followed closely by the Department of Health and Human Services at 96.4% and State Department at 96.1%, according to data provided by the White House Wednesday.

Law enforcement agencies do lag behind in vaccines, with the Justice Department at 89.8%. The Department of Veterans Affairs is at 87.8% of partial vaccinations, though the Defense Department was 93.4% and the Homeland Security Department was 88.9%. The government office with the lowest number of partially vaccinated employees was the Agriculture Department, at 86.1%.

But overall, 96.5% of federal employees have been deemed in compliance with the policy, which also includes medical or religious exemptions that are still being evaluated. The rest are considered out of compliance, but officials emphasized that “it’s not a cliff,” and that workers will receive counseling to get vaccinated or file for an exemption. Only then would termination be considered.

“We know vaccine requirements work,” said White House assistant press secretary Kevin Munoz. “We hope that our implementation sends the clear message to businesses to move forward with similar measures that will protect their workforce, protect their customers, and protect our communities.”

White House officials said the data was just a snapshot and the numbers would continue to rise in the days and weeks ahead. As they work through additional vaccines and exceptions, there will be no disruptions to government services, the officials said.

Since instituting the initial vaccine-or-test mandate this summer and then the more-restrictive requirement without a test-out option this fall, the White House has believed the federal government could serve as a model for the rest of the nation’s employers for how vaccinations could help shepherd a quicker return to the normal.

White House officials say the most important lesson for businesses from the federal experience is that once they take the first step toward requirements, their workers will follow.

The numbers from the Internal Revenue Service show how a mandate can drive up the vaccination rate. About 25% of the agency’s workforce first got a shot after Biden announced the mandate in September; now, 98% are in compliance.

Agencies with marginally lower vaccination rates tend to have widely dispersed workforces, making education and counseling about the benefits of vaccines — or even just the task of getting workers to self-report that they’ve already gotten a shot – more difficult.

There is still some resistance. The union representing federal prison workers filed a lawsuit seeking to block the mandate, arguing it’s an unfair labor practice and violates employees’ free speech and privacy rights. Shane Fausey, the president of the Council of Prison Locals, said in a Wednesday letter to members that more than 3,500 federal Bureau of Prisons employees — about 10% of the agency’s workforce — were being issued counseling letters and face possible termination for not complying with the mandate.

Fausey’s letter repeated misinformation about the vaccine, including claims that it doesn’t stop the spread of COVID-19 and that it does not reduce the “overall adverse medical effects of the virus.” Lawyers Bruce Castor and Michael van der Veen, who represented former President Donald Trump at his second impeachment trial, are representing the union.

As of late October, several intelligence agencies apparently had at least 20% of their workforce unvaccinated, said Republican Rep. Chris Stewart of Utah, a member of the House Intelligence Committee.

Some of the initial fears about the vaccination status of the federal workforce stemmed from employees without access to government computers to make their vaccination certification. Some, like front-line Transportation Security Administration officers, rarely use a government computer. Others are in the field or simply delayed responding to the survey or beginning vaccination.

The federal vaccination rate outpaces the rate of vaccination for all Americans. About 82.2% of American adults, or more than 212 million people, have received at least one dose. Of them about 71%, or over 183 million, are fully vaccinated.