Algeria Defies US Through Exercises With Russia 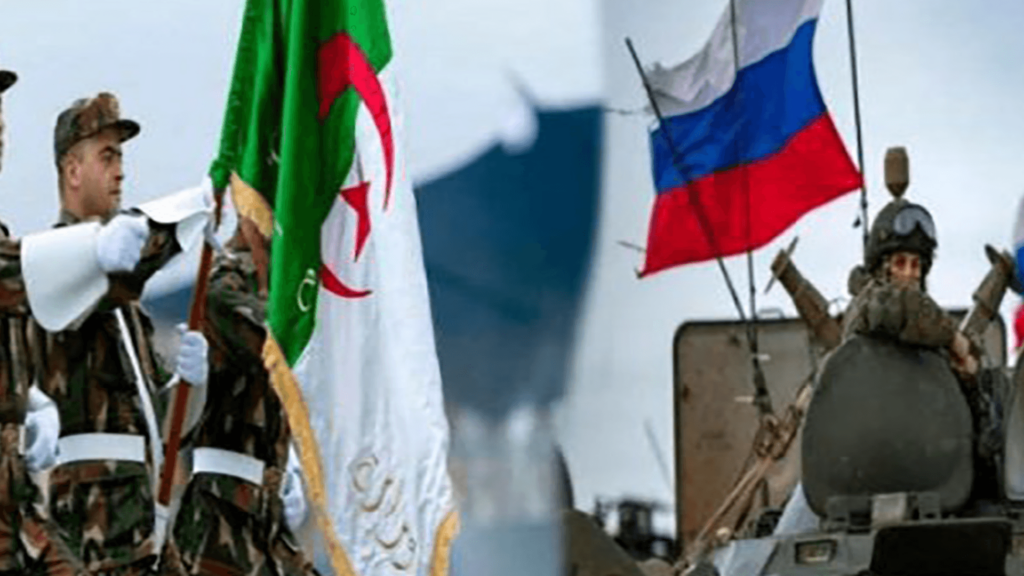 Algeria Defies US Through Exercises With Russia

In defiance of the American warnings, and in an apparent response to the letter signed by 27 US Representatives, demanding that the Biden Administration activate the procedure to punish Algeria for concluding huge arms deals with Russia — the Algerian regime, in partnership with the Russian army, will carry out military maneuvers from November 16 to 28, 2022, in the Bashar region, near the Moroccan border.
The transition to an operational stage in Algerian-Russian military relations is not merely a recent development. In November 2021, the two countries held joint military exercises in South Ossetia, where an Algerian contingent took part. In September 2022, a unit comprising 100 soldiers of the Algerian People’s National Army participated in the training “VOSTOK 2022”, held in the Far East of Russia.
These maneuvers complement a series of naval military maneuvers between the Algerian and Russian armies over the past two years.
A few days before these exercises, the Director of the Federal Service for Military and Technical Cooperation of Russia, Dimitri CHOUGAEV, traveled to Algeria, where he met, on November 10, 2022, with the Chief of Staff of the People’s National Army, Saïd Chengriha. This visit consolidated the relations between the two armies and comes in the wake of a $23 billion increase in the Algerian military budget for the year 2023. This has led Russian military officials to covet Algeria to get a significant share of this budget in the form of arms sales. Moscow will reap substantial benefits from arms sales to Algeria, which will undoubtedly be used to finance and support Russia’s invasion of Ukraine.
The Bechar exercises are a clear message from Moscow to the West, demonstrating Russia’s ability to deploy its forces close to Western interests in the Mediterranean region.
The Algerian behavior and defiance of the west with regard to Ukraine shows the unbreakable geopolitical relationship between Algeria and Russia and removes all doubt that Algiers is in the pro-Russian clan.
It should be noted that these most recent Russian-Algerian maneuvers complement a series of naval military maneuvers between the Algerian and Russian military over the past two years.
At a time when the Algerian authorities claim that they have adopted a position of neutrality regarding the war in Ukraine, we find that their injection of billions of dollars into the Russian treasury is clear support for Vladimir Putin and contradicts the positions of the international community rejecting the Russian invasion of Ukraine. Moreover, it reveals that claims of neutrality are little more than lies.
The Algerian establishment considers the alliance with Moscow as sacrosanct and a cornerstone of the Algerian state’s strategy, while Moscow considers Algeria an extended front in its strategy of military confrontation with the West.
Russia will resort to this front for its striking force to maintain a close range, which renders the Algerian Moroccan border a demarcation line between the zone of Western influence and that of Russia’s increasingly totalitarian sphere of influence.
Algeria’s alignment with Russian positions harms the geopolitical interests of The West. Therefore, countries of the West should review their strategies and partnerships with Algeria.
Algeria is reaping the benefits of its energy contracts with the West, while it continues to enhance its military cooperation with Moscow. Cooperation between Russia and Algeria is not limited to the bilateral aspect, as Algeria has contributed to facilitating Russia’s military presence on the African continent.
While thousands of young Algerians throw themselves into death boats in the hope of crossing to Europe in search of a better future, the Algerian regime is squandering the wealth of Algerians through arms deals with the Russians, money that would have been more appropriate to allocate for human development and provide better living conditions for the Algerian people.
In this context, The Economist published an article entitled “Why Algeria’s rotten regime has been lucky.”
“Two words in the local lexicon encapsulate Algeria’s malaise: Hogra and Haraga. The first encompasses a range of gloomy feelings that affect Algerians: a sense of humiliation and oppression, a denial of dignity. This leads to the second increasingly common word, literally meaning. “Those who burn”. It is applied to the growing number of Algerians wanting to emigrate illegally to get a better life abroad, involving the burning of identity papers. So far this year some 13,000 have reached Spain in rickety boats,” The Economist wrote.
How can the world remain silent in front of this horrific number of abuses against Algerian youth while the Algerian generals are proud of their wealth accumulated in foreign banks?
How can the United States allow Algeria to become an advanced base for the Russians and their gateway to Africa?
Questions that officials in the Biden Administration may not wish to ask because asking these questions may force them to take immediate action to defend American interests.
Perhaps they prefer immediate solutions, as happened in Afghanistan, rather than move with farsightedness and strategy. But that didn’t turn out well. So perhaps a bit more wisdom could be employed this time around.