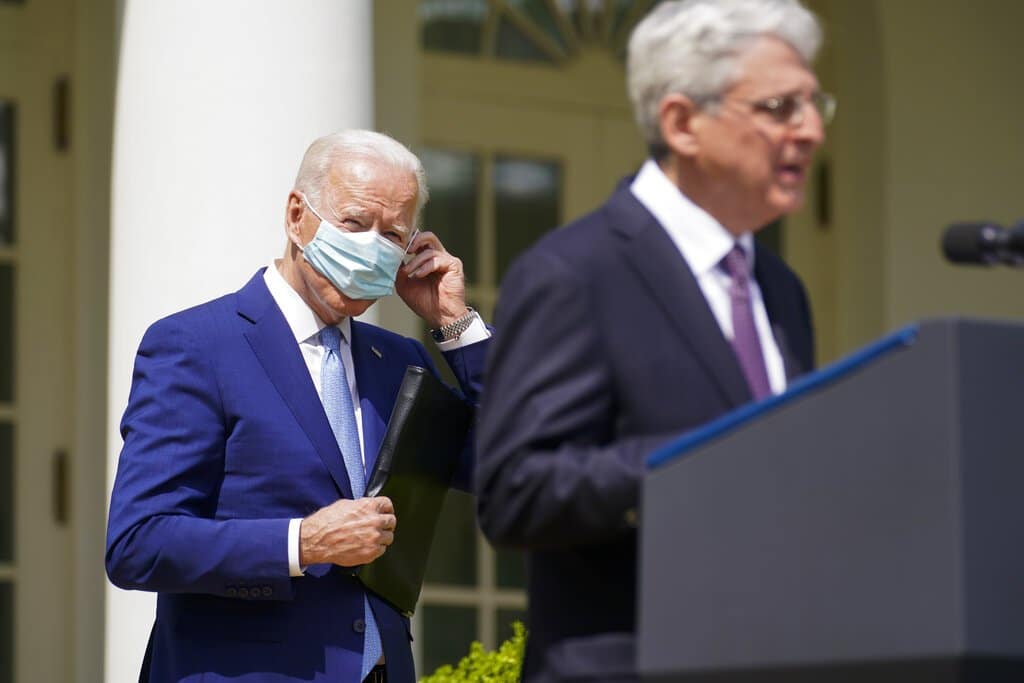 President Joe Biden announced six executive actions on gun control Thursday, including making it more difficult to own “ghost guns” and pistol-stabilizing braces. He’s expected to follow up with more measures, possibly some of the more drastic proposals he campaigned on such as enacting universal background check legislation and banning online sales of firearms and the manufacture and sale of assault weapons and high-capacity magazines. The Associated Press has the story:

WASHINGTON (AP) — President Joe Biden, in his first gun control measures since taking office, announced a half-dozen executive actions Thursday aimed at addressing a proliferation of gun violence across the nation that he called an “epidemic and an international embarrassment.”

“The idea that we have so many people dying ever single day from gun violence in America is a blemish on our character as a nation,” Biden said during remarks at the White House.

Family members whose children were killed at the Sandy Hook, Connecticut, school massacre in 2012 and the shooting at Marjory Stoneman Douglas High School in Parkland, Florida, in 2018 attended the hearing, and Biden thanked them for attending, saying he understood it would remind them of the awful days when they got the calls.

He assured them, “We’re absolutely determined to make change.”

Biden’s Thursday announcement delivers on a pledge the president made last month to take what he termed immediate “common-sense steps” to address gun violence, after a series of mass shootings drew renewed attention to the issue. His announcement came the same day as yet another, this one in South Carolina, where five people were killed.

Biden emphasized the scope of the problem: Between the mass killings in Atlanta massage businesses and the Colorado grocery store shooting last month, there were more than 850 additional shootings that killed 250 and injured 500 in the U.S., he said.

But Thursday’s announcement underscores the limitations of Biden’s executive power to act on guns. His orders tighten regulations on homemade guns and provide more resources for gun-violence prevention but fall far short of the sweeping gun-control agenda he laid out on the campaign trail.

“This is not a partisan issue among the American people,” Biden insisted.

While Biden asserted that he’s “willing to work with anyone to get it done,” gun control measures face slim prospects in an evenly divided Senate, where Republicans remain near-unified against most proposals.

Biden was joined at the event by Vice President Kamala Harris and Attorney General Merrick Garland. Garland said he was “under no illusions about how hard it is to solve the problem of gun violence” and emphasized a need for a “collective effort to keep guns out of the hands of criminals and save lives.”

The Justice Department cannot solve the problem by itself, he said, but “there is work for the department to do, and we intend to do it.”

Biden is tightening regulations of buyers of “ghost guns” — homemade firearms that usually are assembled from parts and milled with a metal-cutting machine and often lack serial numbers used to trace them. It’s legal to build a gun in a home or a workshop and there is no federal requirement for a background check.

The Justice Department will issue a proposed rule requiring such gun kits be treated as firearms under the Gun Control Act, which would require that the parts be made with serial numbers and that buyers receive background checks.

Months before Biden was elected, the federal government had already been working on a proposed rule that would change the definition of a firearm to include lower receivers, the essential piece of a semiautomatic rifle, in an effort to combat the proliferation of ghost guns and to stave off losing court battles over the issue.

The process had been in the works in the waning months of the Trump administration, according to four people familiar with the matter. Justice Department leaders and officials at the Bureau of Alcohol, Tobacco, Firearms and Explosives had been working on language for a proposed rule since at least the summer of 2020, the people said.

A second proposed rule, expected within 60 days, will tighten regulations on pistol-stabilizing braces, like the one used by the Boulder, Colorado, shooter in a rampage last month that left 10 dead. The rule will designate pistols used with stabilizing braces as short-barreled rifles, which require a federal license to own and are subject to a more thorough application process and a $200 tax.

The department also is publishing model legislation within 60 days that is intended to make it easier for states to adopt their own “red flag” laws. Such laws allow for individuals to petition a court to allow the police to confiscate weapons from a person deemed to be a danger to themselves or others.

The department also will begin to provide more data on firearms trafficking, starting with a new comprehensive report on the issue. The administration says that hasn’t been done in more than two decades.

The Biden administration will also make investments in community violence intervention programs, which are aimed at reducing gun violence in urban communities, across five federal agencies.

The president argued that gun violence was also a massive economic strain, citing the costs from hospital visits, legal fees, and the cost of keeping people in prison and providing therapy to victims and others. A majority of firearm deaths are from suicides.

Biden’s nominee for BATF comes from a gun control organization

Biden is also nominating David Chipman, a former federal agent and adviser at the gun control group Giffords, to be director of the Bureau of Alcohol, Tobacco, Firearms and Explosives.

The ATF is currently run by an acting director, Regina Lombardo. Gun-control advocates have emphasized the significance of this position in enforcing gun laws, and Chipman is certain to win praise from this group. During his time as a senior policy adviser with Giffords, he spent considerable effort pushing for greater regulation and enforcement on ghost guns, changes to the background check system and measures to reduce the trafficking of illegal firearms.

Chipman spent 25 years as an agent at the ATF, where he worked on stopping a trafficking ring that sent illegal firearms from Virginia to New York, and served on the ATF’s SWAT team. Chipman is a gun owner.

During his campaign, Biden promised to prioritize new gun control measures as president, including enacting universal background check legislation, banning online sales of firearms and the manufacture and sale of assault weapons and high-capacity magazines. But gun-control advocates have said that while they were heartened by signs from the White House that they took the issue seriously, they’ve been disappointed by the lack of early action.

With the announcement of the new measures, advocates did laud Biden’s first moves.

“Each of these executive actions will start to address the epidemic of gun violence that has raged throughout the pandemic, and begin to make good on President Biden’s promise to be the strongest gun safety president in history,” said John Feinblatt, president of Everytown for Gun Safety.