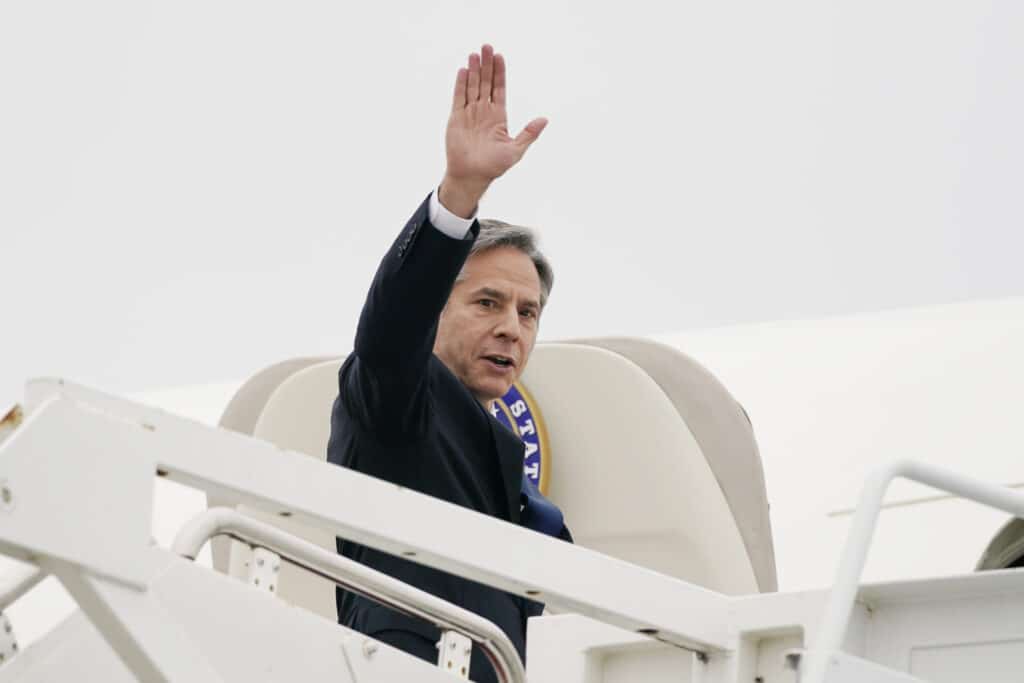 After the successful effort led by Egypt shutting down the conflict between Israel and Hamas militants in Gaza, Secretary of State Antony Blinken is headed to the region to solidify and expand on the cease-fire. He will visit Israel, the West Bank, Jordan and Egypt. The Associated Press has the story:

Secretary of State Antony Blinken to visit Israel, the West Bank, Jordan and Egypt to build on Israel-Gaza cease-fire

WASHINGTON (AP) — Secretary of State Antony Blinken will head to the Middle East on Monday to press the Israelis, Palestinians and regional players to build on and strengthen last week’s Gaza cease-fire, start an immediate flow of humanitarian aid to the Gaza Strip and lay the groundwork for an eventual resumption in long-stalled peace talks.

President Joe Biden announced that he was dispatching Blinken to the region for what will be his administration’s highest-level, in-person talks on the crisis that erupted earlier this month. The State Department said Blinken will visit Israel, the West Bank, Jordan and Egypt on a trip that comes as the administration has faced broad criticism for its initial response to the deadly violence.

In a statement, Biden said Blinken will work with regional partners to ensure “the coordinated international effort to ensure immediate assistance reaches Gaza.”

The official, who was not authorized to discuss the trip by name and spoke to reporters on the condition of anonymity, said Blinken would be looking at how the U.S. can support Israel and the Palestinians in rebuilding, address the underlying causes that led to this crisis and advance equal measures of freedom, security and prosperity for Israelis and Palestinians “in tangible ways.”

The official would not offer specifics as to what those “tangible ways” are, but already donor nations are being asked to look at potential new contributions to reconstruct damage done to civilian infrastructure in Gaza.

Blinken will not meet with Hamas

While Blinken will meet with the leaders of Israel, the Palestinian Authority, Egypt and Jordan, he will not see anyone from the militant Hamas movement that runs Gaza. Hamas is a U.S.-designated “foreign terrorist organization,” and contacts between American officials and the group are banned. That means the U.S. must rely on third countries like Egypt and Qatar to pass messages to Hamas. Hamas and Abbas’ Fatah movement are also at odds, meaning that Palestinian leadership is split.

The senior State Department official said one aim of Blinken’s talks would be to try to reintegrate Fatah “to some extent” into a leadership role in Gaza, where it has been locked out of power since losing elections in 2006. The official said that could help create conditions for more stability.

The Biden administration had been taken to task for its early response to the violence, including from Democratic allies in Congress who were demanding it take a tougher line on Israel and its response to rocket attacks from Palestinian militant groups in Gaza.

The administration has defended its response by saying it engaged in intense, but quiet, high-level diplomacy to support a cease-fire, which was ultimately arranged last week after Egyptian mediation.

Blinken said Sunday that the behind-the-scenes effort led by Biden paid off, securing a truce after 11 days.

Report: Blinken says No Evidence Hamas was in Bombed Building

“President Biden leading this effort made the judgment that we could be most effective in doing that. And ultimately, after this intensive effort across the government, we got to where everyone wanted to be, which was to end the violence,” he said in an interview with CNN.

“But now, as the president said, I think it’s incumbent upon all of us to try to make the turn to start to build something more positive, and what that means at heart is that Palestinians and Israelis alike have to know in their day in and day out lives equal measures of opportunity, of security, of dignity,” Blinken said.

He said the time is not right for an immediate resumption in negotiations between the two sides but that steps could be taken — mainly humanitarian initiatives — to repair damage from Israeli air strikes in Gaza, which caused significant damage to civilian infrastructure and deaths.

“I don’t think we’re in a place where getting to some kind of a negotiation for what ultimately, I think, has to be the result, which is a two-state solution, is the first order of business,” he said. “We have to start building back in concrete ways and offering some genuine hope, prospects, opportunity in the lives of people.”