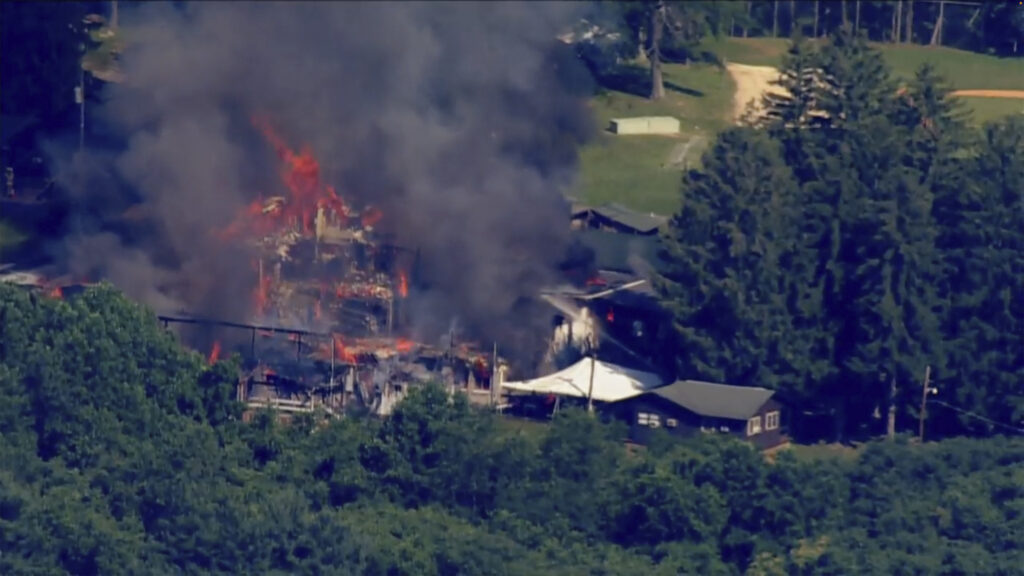 The Camp Airy for Boys in Thurmont, Maryland caught fire this morning, but firefighters appear to have it under control. It took about 100 firefighters three hours to slow the fire down, with crews still extinguishing hot spots this afternoon. The Associated Press has the story:

Fire at Camp Airy for Boys in Thurmont under control

THURMONT, Md. (AP) — Crews battled a fire at an overnight summer camp in western Maryland on Wednesday morning, but no injuries were reported, officials said.

Firefighters were initially dispatched about 7:30 a.m. for a report of a fire in a building at Camp Airy for Boys in Thurmont, Frederick County Division of Fire & Rescue Services spokesperson Sarah Campbell said.

When units arrived on scene, no one was in the building, but they found smoke showing through the roof and a second alarm was initiated, Campbell said. It took about 100 firefighters from Maryland and Pennsylvania three hours to bring the fire under control, but crews were still extinguishing hot spots in the building in the afternoon, she said.

Without fire hydrants near the camp, firefighters drew water from a large pond and two pools to battle the flames, Deputy Chief Kenny Poole said at a news conference.

Firefighters contained the blaze to the dining hall and no other buildings were involved, Campbell said. Investigators won’t be able to enter the building to determine the origin and cause of the blaze until the fire is out completely, she said.

In a Facebook post, the camp said it was too soon to know the extent of the damage the dining hall, but everyone is safe and accounted for. The dining hall is a hub of activity, so they are relocating many activities, the camp said. The Jewish overnight camp for boys and nearby Camp Louise for girls in Cascade were founded in the 1920s, according to their website.

Breakfast prep had begun when the smoke was noticed and people got out quickly, Marty Rochlin, director of the camp said at a news conference. They are planning to carry on camp as regularly as possible, he said.

“It’s a building most of us grew up in, had all our meals in as campers and as staff,” Rochlin said. “Thankfully, it’s just a building. Camp can continue because camp is the people.”