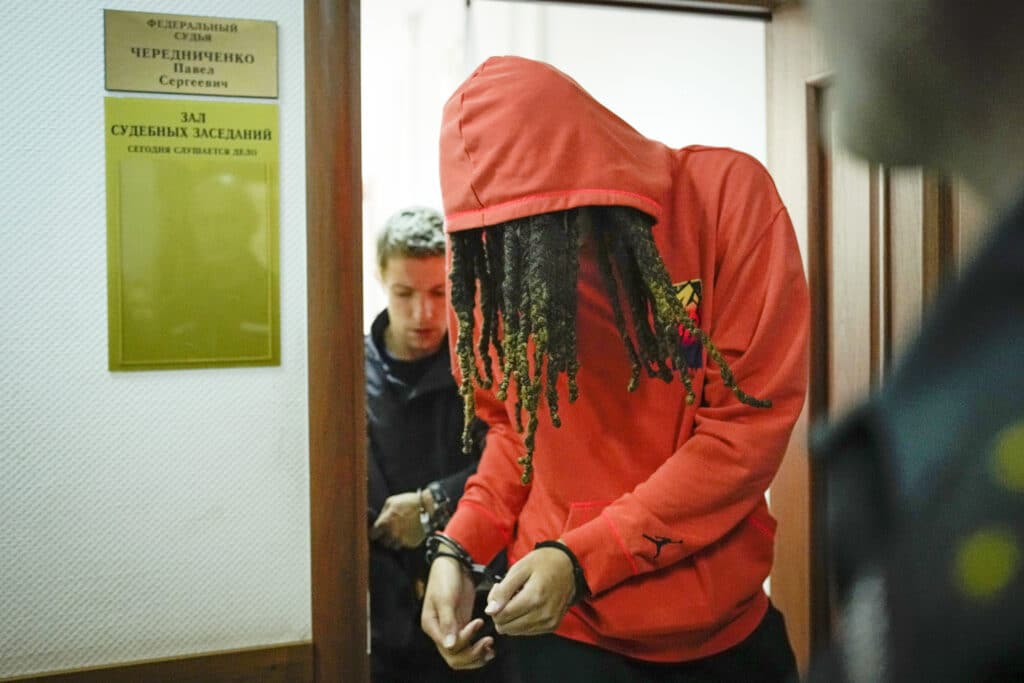 Brittney Griner’s wife Cherelle wants President Joe Biden to secure her partner’s release, by doing whatever he can to get to that end, but this is a lesson for people traveling abroad, just because the U.S. state you live in may have legalized marijuana doesn’t mean other countries have tolerance of that. The Phoenix Mercury center has been detained since Feb. 17 after vape cartridges containing oil derived from cannabis were allegedly found in her luggage at an airport near Moscow. As reported by the AP:

Griner’s wife, Cherelle has talked with Secretary of State Antony Blinken about Brittney’s case, but not President Biden

Brittney Griner’s wife Cherelle wants President Joe Biden to secure her partner’s release, doing whatever is necessary to get the WNBA star home from Russia where she has been detained for more than three months.

“I just keep hearing that, you know, he has the power. She’s a political pawn, ” said Cherelle, who became emotional detailing what little she knows about Griner’s detainment during an interview that aired Wednesday on Good Morning America. “So, if they’re holding her because they want you to do something, then I want you to do it.”

The Phoenix Mercury center has been detained since Feb. 17 after vape cartridges containing oil derived from cannabis were allegedly found in her luggage at an airport near Moscow.

The 31-year-old Griner — a two-time Olympic gold medalist for the U.S. — faces drug smuggling charges that carry a maximum penalty of 10 years in prison. Earlier this month, the Biden administration said Griner is being wrongfully detained.

Cherelle has talked with Secretary of State Antony Blinken about Griner’s case, but not the president.

“I was grateful for the call, you say she’s top priority, but I wanna see it. and I feel like to see it would be me seeing BG on U.S. soil,” Cherelle said. “At this point I don’t even know who I’m getting back when she comes back.”

Russian officials have described Griner’s case as a criminal offense without making any political associations. But Moscow’s war in Ukraine has brought U.S.-Russia relations to the lowest level since the Cold War.

Despite the strain, Russia and the United States carried out an unexpected prisoner exchange last month — trading former Marine Trevor Reed for Konstantin Yaroshenko, a Russian pilot serving a 20-year federal prison sentence for conspiring to smuggle cocaine into the United States.

While the U.S. does not typically embrace such exchanges, it made the deal in part because Yaroshenko had already served a long portion of his sentence.

The Russians may consider Griner someone who could figure into another such exchange.

Besides Griner, another American regarded as unjustly detained in Russia is Paul Whelan, a corporate security executive from Michigan. Whelan was arrested in December 2018 while visiting for a friend’s wedding and was later sentenced to 16 years in prison on espionage-related charges his family has said are bogus.

Cherelle, who graduated from law school at North Carolina Central University earlier this month, hasn’t talked on the phone with Griner since the day she was first detained.

“I first heard the news through Brittney, actually. She started texting me around 2:00 a.m. that morning,” Cherelle said. “‘Babe. Babe. Babe. Wake up. They have me in this room. I don’t know what’s going on.’ and so I instantly text back “Who are they and what room?”

Cherelle said Griner responded, texting: “The customs people. They just grabbed me when I was going through, and they have me in this room.” Griner then sent a message saying, “They’re about to take my phone.”

Cherelle said she told Griner to call her when she could. She’s still waiting for that call nearly 100 days later.

“The first week I laid on this couch and cried my eyeballs out. I was numb. I couldn’t move. And then I said, ‘You got to get up now.'”

Cherelle and Brittney communicate through letters and her lawyers. The attorneys print out articles to show Griner so she can keep up to date with what’s going on.

Cherelle became emotional when talking about the support from friends, teammates and the WNBA are helping Griner stay strong during their struggle for her release. The league has acknowledged 6-foot-9 Mercury center’s absence by putting a decal with her initials and number on the home floor of all 12 teams.

“It comforts BG. It lets her know she’s not forgotten and … when you’re sitting over there, your country … they haven’t come … to your rescue yet. I know that it makes her feel good Because she doesn’t want to be forgotten.

“Things like that matter, like, it has her hopeful,” Cherelle said. “It lets her know she’s not forgotten. Those small moments, I know give her some type of hope.”

The WNBA and U.S. officials have been working toward her release, without visible progress. A U.S. consular officer was able to meet with Griner last week.

“We did note that a consular official from our embassy in Moscow was able to visit with Brittney Griner on the margins of her court hearing in Moscow that day,” State Department spokesman Ned Price said Tuesday. “We have made the point that one off consular visits are, in our view, not sufficient.

“But it’s not only in our view, it is in the requirements that are put forward by the Vienna Convention and other bilateral agreements that stipulate that we should have regular, sustained access to Americans who are held in detention around the world, including to those in pretrial detention.”