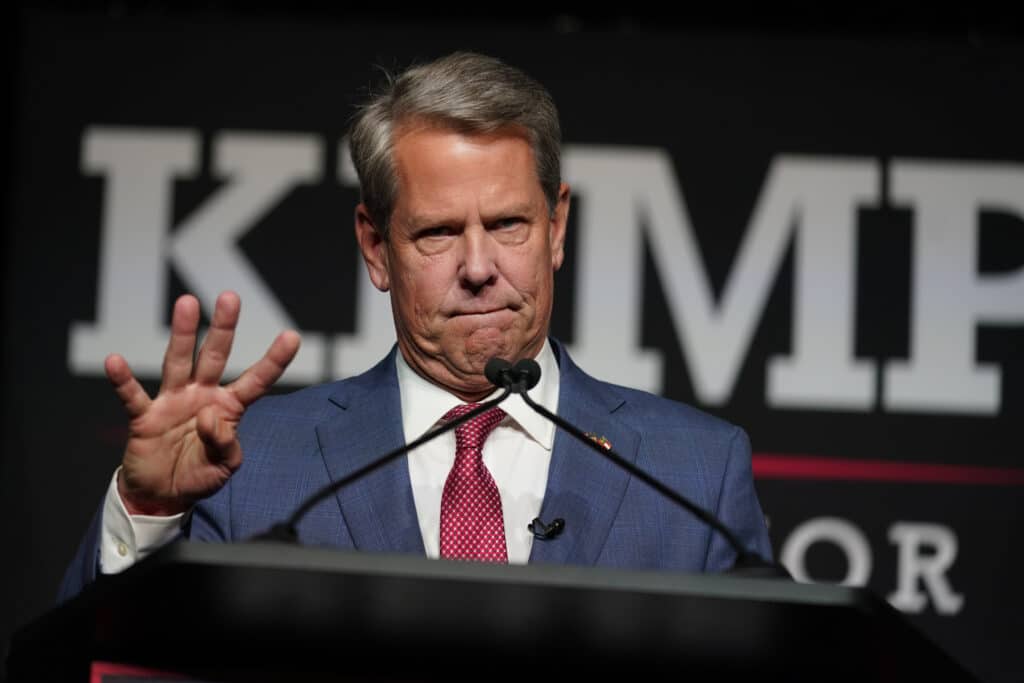 Former President Donald Trump had hoped to turn Georgia Gov. Brian Kemp into an example of the danger in defying him, but that plan backfired when Kemp handily beat main challenger Trump backed former Senator David Purdue in Tuesday’s Republican primary. The victory came a year and a half after Kemp rejected Trump’s demands to help overturn the presidential election by declaring Trump the winner in Georgia. As reported by the AP:

Perdue’s campaign fixated on Trump’s belief that the 2020 presidential election was stolen from him, but Kemp won by flexing the power of his office

It’s a huge warning sign for the way Republican voters view the former president’s crusade to punish those who were not willing to overturn the will of the voters in 2020.

Voters also demonstrated an openness to embracing scandal-plagued candidates — depending on the candidate, and the scandal.

Here are some takeaways from Tuesday’s primary elections in Georgia, Alabama, Arkansas, Texas and Minnesota:

Trump had hoped to turn Georgia Gov. Brian Kemp into an example of the danger in defying him. Instead, Kemp on Tuesday became an example of how Republican incumbents might not have as much to fear from Trump as the former president would like.

Kemp cruised past former U.S. Sen. David Perdue in the Republican primary. The victory came a year and a half after Kemp rejected Trump’s demands to help overturn the presidential election by declaring Trump the winner in Georgia instead of Joe Biden, who actually won.

Perdue’s campaign fixated on Trump’s lie that the 2020 presidential election was stolen from him, but Kemp won by flexing the power of his office. To rally the base, he signed laws allowing most Georgians to carry guns without a permit and banning most abortions after a fetal heartbeat is detected. He also announced an investment by Hyundai in a new plant in the state to make batteries for electric vehicles.

Now Kemp will face Democrat Stacey Abrams in a rematch of their 2018 gubernatorial clash. Unlike Trump in 2020, Perdue accepted his defeat Tuesday night, even seeming to brush aside some supporters who took up a chant suggesting there was fraud.

“I’m sorry, but what we’re going to do right now is make sure Stacey Abrams is not governor of this state,” Perdue said.

The Georgia governor’s race wasn’t the only Trump grudge match that backfired on the former president. Secretary of State Brad Raffensperger, who personally rejected Trump’s call to “find” enough votes to declare him the winner in Georgia, defeated his Trump-backed primary challenger as well.

Trump recruited U.S. Rep. Jody Hice from a safe congressional seat to face Raffensperger in the Republican primary, but Hice lost. Trump endorsed primary challengers to the insurance commissioner and attorney general, and they, too, lost.

It’s clear the former president’s harping on 2020 simply did not speak to Republican voters in Georgia, the country’s newest battleground state.

“Georgia underscores one of Trump’s big problems if/when he runs again,” Brendan Buck, a former spokesperson for onetime House Speaker Paul Ryan, tweeted Tuesday. “He, of course, won’t be able to let go of the 2020 nonsense, and nobody wants to hear his whining about it anymore.”

Trump has scored some primary victories with election deniers — most significantly last week in Pennsylvania, when Republican voters there chose his preferred gubernatorial candidate Doug Mastriano, who said he wouldn’t have certified Biden’s 2020 win of the state.

But multiple Republicans have made clear they’re eyeing 2024 presidential bids, including Pence and Florida Gov. Ron DeSantis. And they have distanced themselves in ways large and small from Trump’s election allegations. Elections are usually about the future, and by the time the 2024 GOP primary rolls around, November 2020 will be ancient history.

Trump did notch some wins Tuesday. They came with baggage, but that didn’t seem to stop them.

Former football great Herschel Walker, Trump’s pick for U.S. Senate in Georgia, dominated his Republican challengers. Party leaders had first shied away from him because of his checkered history.

Walker, in his autobiography, admits struggling with mental illness. His ex-wife said that during their marriage he held a gun to her head and threatened to kill her. He claimed to have founded a chicken processing company employing hundreds but reported only eight workers when applying for a loan during the coronavirus pandemic. He lied about founding a charity to help veterans get aid with mental health.

But eventually even Republican Senate leader Mitch McConnell ended up embracing Walker as the party’s best chance to oust Democratic U.S. Sen. Raphael Warnock. The bet is that voters won’t care as much about scandals in post-Trump America.

That theory certainly got a boost Tuesday in Texas. Republican Attorney General Ken Paxton was indicted in 2015 on securities fraud charges and is still awaiting trial. He’s under investigation for corruption by the FBI and by the state bar of Texas for his role in trying to overturn the 2020 presidential election. Yet he easily won his primary against Land Commissioner George P. Bush, powered by his ability to use his office to cater to conservative causes by, for example, investigating the parents of transgender children.

Back in Georgia, firebrand Rep. Marjorie Taylor Greene won her Republican primary, shrugging off challengers who complained Greene was giving the party a bad name by engaging in Holocaust denial and other headline-grabbing, bombastic behavior.

Trump set the model in 2016, and his followers are perfecting it — never let a scandal get in the way of winning an election.

A GAME OF INCHES

The marquee Democratic matchup of the night — in Texas’ 28th Congressional District, between progressive Jessica Cisneros and centrist Rep. Henry Cuellar, one of the last abortion rights opponents in the Democratic caucus — was too early to call Wednesday.

The two candidates were separated by the thinnest margin of votes in a rematch two months after they were forced into a runoff. It drove home two realities: Elections are a game of inches, and even a victory won’t resolve the great left versus center divide in the Democratic Party.

After the collapse of much of Biden’s agenda in Congress, progressives have gotten a boost in recent primaries. Their candidate, Summer Lee, narrowly won the primary in Pennsylvania’s 12th Congressional District last week. In Oregon’s 5th Congressional District, centrist Rep. Kurt Schrader was trailing a progressive challenger after their primary last week; the results were delayed by ballot counting problems.

Also Tuesday, Rep. Lucy McBath handily defeated Rep. Carolyn Bourdeaux in the Democratic primary in Georgia’s 7th Congressional District in the Atlanta suburbs. While neither has embraced the left wing of the party, Bourdeaux was better known as a moderate than McBath.

Still, the left lost a key congressional primary in the Cleveland area just a few weeks ago. They had an awful track record in 2020. And some Democrats worry — and Republicans hope — that leftist wins in places like Oregon’s 5th or Texas’ 28th will make it harder for the party to hold those relatively moderate districts, especially in what’s looking like a dismal fall for Democrats.

Sometimes, though, races are so close that there’s eventually a winner but no resolution to the political debate they embody. Progressives can note Cisneros improved her margin after losing to Cuellar in 2020. Centrists can point to how the incumbent kept it close even amid the party’s fury about a possible end to the right to abortion.

After Texas, the struggle between the Democrats’ left and centrist wings seems poised to go on.