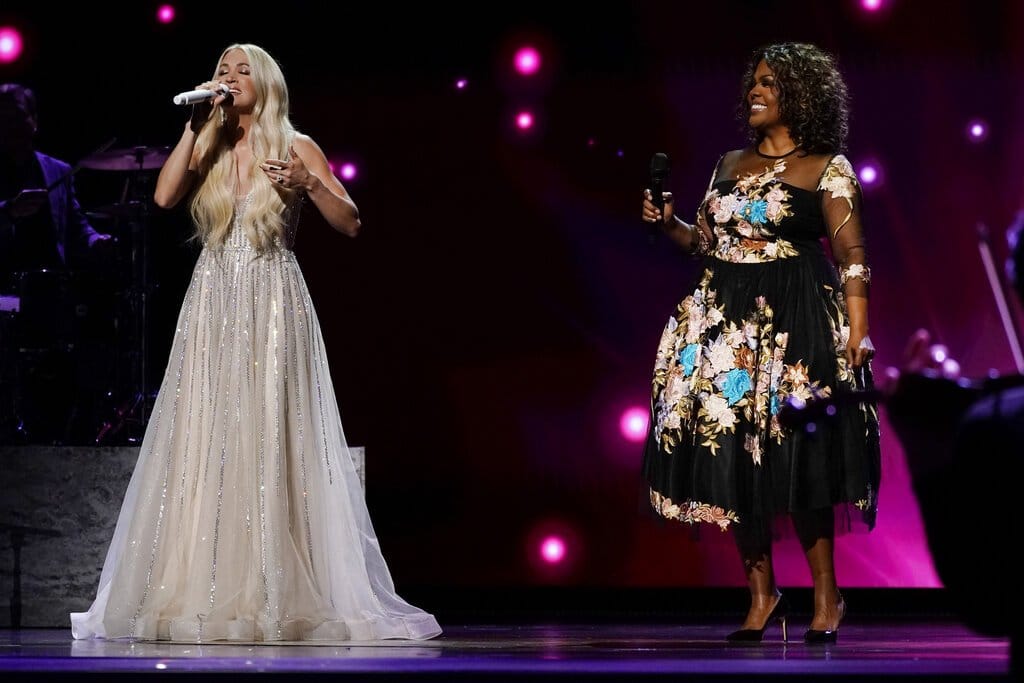 The gospel legend and country superstar joined forces for a top-notch, powerful performance that was the show’s highlight, though the event is still on for two more hours.

Underwood performed songs from her recent gospel hymns album “My Savior,” and she and Winans blended their voices like angels onstage. Underwood kicked off the performance with “Amazing Grace” and “Great Is Thy Faithfulness,” then Winans joined in, matching her strong vocal performance.

Collaborative moments were a theme during the awards show.

Miranda Lambert, the most decorated artist in the history of the ACM Awards, kicked off the show alongside rock-pop singer Elle King for a fun, energetic performance of their new duet. Lambert and King wore matching outfits — an all-black ensemble with pink fringe hanging from Lambert’s leather jacket and blue from King’s — and sang the anthemic track “Drunk (And I Don’t Wanna Go Home)” from the Grand Ole Opry House in Nashville, Tennessee.

The performance, like many airing Sunday night, was pre-taped at various locations in Nashville, including the Ryman Auditorium and The Bluebird Cafe, in front of small audiences made up of medical and healthcare workers.

Lambert, who founded pet shelter nonprofit MuttNation, also performed alongside Chris Stapleton for “Maggie’s Song,” a tribute to Stapleton’s dog who died 2019. Her third performance was with Jack Ingram and Jon Randall.

Dierks Bentley was also memorable onstage, singing U2’s “Pride (In the Name of Love)” with The War and Treaty, the extremely talented husband-and-wife duo.

Another couple blazed the stage Sunday: Maren Morris and Ryan Hurd performed, ending with a kiss. Morris later won song of the year for her Grammy-nominated hit “The Bones,” which topped the country music charts for months last year.

“When I wrote (‘The Bones’) I was dating my now-husband and it was just a song to him. And I feel sometimes, like, songs know you better than you know them at the time. And I feel like this song has revealed so many new things to me,” a teary-eyed Morris said onstage. “And this is just been a hell of a year and hopefully country music and maybe even this song brought you and your family and friends some peace.”

But not everything went smoothly. The Grammy-winning duo Dan + Shay performed their latest hit, “Glad You Exist,” but the pre-taped moment aired out of sync.

“Apparently there was an audio/video sync issue on the television broadcast,” the duo tweeted. “We’re bummed about it, but it happens, especially when performances are happening in multiple locations.”

Another mishap occurred when Martina McBride announced the winner of single of the year. McBride correctly said “I Hope You’re Happy Now” by Carly Pearce and Lee Brice won, though “I Hope” by Gabby Barrett appear on the TV screen.

“We wrote this song about my story and I guess it resonated with everybody,” Pearce said onstage, also thanking busbee, who produced the song and died in late 2019. “This is the last song that my producer worked on.”

Lambert, who has won 35 ACMs, was nominated for five honors and still has a chance of extending her record. She isn’t competing for the show’s top prize, entertainer of the year, where all the nominees are male artists. Entertainer of the year nominees include Luke Bryan, Luke Combs, Chris Stapleton, Eric Church and Thomas Rhett, who won the honor last year in a tie with Underwood.

Bryan, who was set to perform at the awards, backed out of the event because he recently tested positive for the coronavirus. All of the other entertainer of the year nominees will perform.

Another big name in country music is also missing from the show: Morgan Wallen. The singer, whose latest album and singles have found major success on both the country and pop charts, was declared ineligible by the ACMs after he was caught on camera using a racial slur earlier this year.

Little Big Town’s Phillip Sweet also won’t participate in the show since he recently tested positive for COVID-19, and his band will perform without him.

The award was presented by Blanco Brown, who made his first public appearance Sunday after suffering significant injuries in a head-on vehicle collision last year.