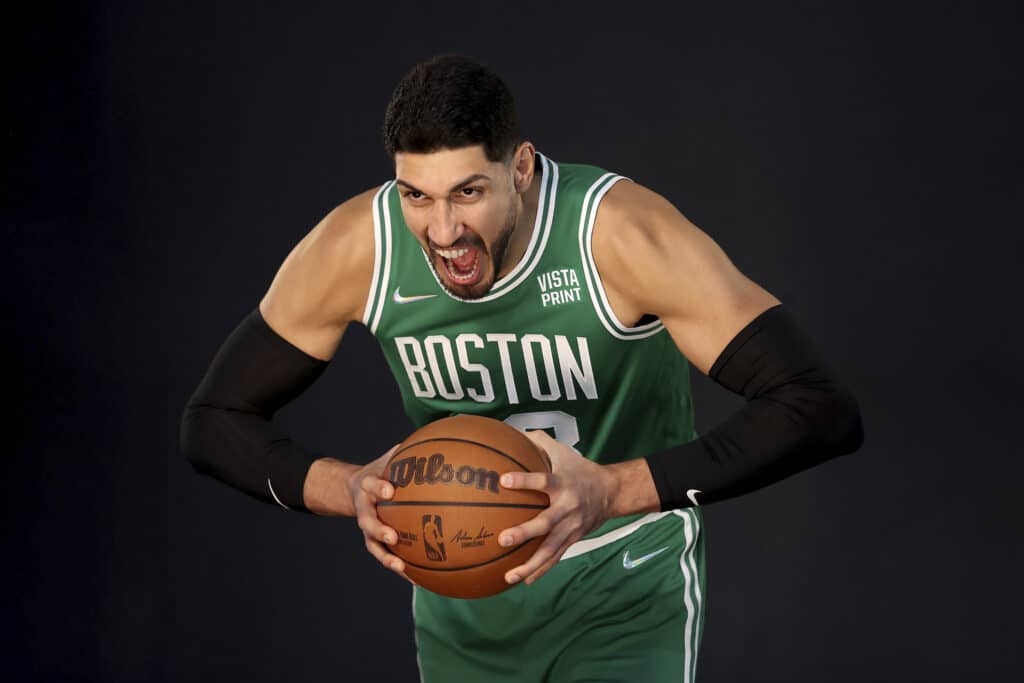 (AP) Chinese broadcaster and NBA partner Tencent is not showing current or archived Boston Celtics games on its platforms, in apparent response to comments that Celtics center Enes Kanter made to advocate Tibetan independence.

Kanter, as part of a series of social media posts, also called Chinese President Xi Jinping a “dictator.” Kanter did not play in Boston’s season-opening 138-134 loss to New York on Wednesday night. The game that was not shown on the streaming services that typically broadcast most NBA games to millions in China.

The NBA had no immediate comment and the Celtics were not practicing Thursday. It was also not immediately clear how long Tencent’s plans to not air the Celtics would last.

Kanter was wearing shoes emblazoned with the words “Free Tibet” during Wednesday night’s game. “More than 150 Tibetan people have burned themselves alive!! — hoping that such an act would raise more awareness about Tibet. I stand with my Tibetan brothers and sisters, and I support their calls for Freedom,” he wrote on Twitter.

The league and China have had a damaged relationship since October 2019, when then-Houston general manager Daryl Morey tweeted in support of government protesters in Hong Kong and sparked what essentially became a blackout for the league in the world’s most populous nation.

NBA games were eventually returned to Tencent’s lineup but not state television provider CCTV, except for two games during the 2020 NBA Finals. Tencent did not offer Philadelphia’s games last season, Morey’s first with the 76ers.

“The player you mentioned was clout-chasing, trying to get attention with Tibet-related issues,” Chinese Foreign Ministry spokesperson Wang Wenbin said Thursday when asked about Kanter’s posts. “His wrong remarks are not worth refuting.”

China’s Communist leaders are extremely sensitive to anything they view as outside interference in domestic political affairs. After Morey’s tweet, the fallout was immense and sponsors — following CCTV’s lead — pulled their backing of the NBA China Games days later between the Los Angeles Lakers and Brooklyn Nets. The NBA estimated that the strained relationship with the Chinese and lost broadcast rights meant the league missed out on about $400 million in revenue during the 2019-20 season alone.

“It’s unclear whether we’ll be back on CCTV television in China this year,” NBA Commissioner Adam Silver said earlier this week.

For now, the fallout from Kanter’s comments does not appear to be as severe as the immediate response to Morey’s tweet, which was quickly deleted. Other NBA games played Wednesday were offered on Tencent, and the three games on Thursday’s schedule appeared on the provider’s listings.

It’s not just the NBA that is finding itself dealing with difficult issues when it comes to relationships with China. A number of groups have called for the U.S. Olympic and Paralympic Committee, and others, to boycott this winter’s Beijing Games in support of human-rights issues.

The USOPC plans to send full teams to China for the February Olympics.

“We expect that China is going to be a unique situation to really allow sport to speak for unity and for global peace and for the rights of people around the world,” said Susanne Lyons, who chairs the USOPC board of directors. “That really is the place where sport can make its stand.”

Previous Article
After scandal, Fed limits investments by its officials
Next Article
Katie Couric opens up in new book about Matt Lauer