Katie Couric opens up in new book about Matt Lauer 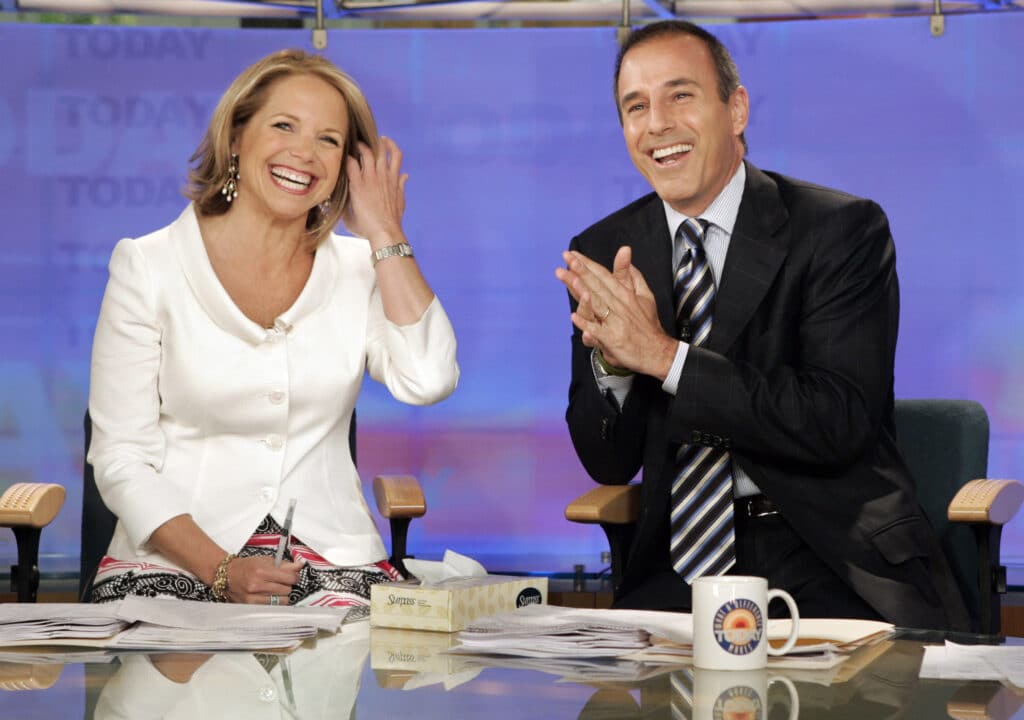 Longtime TV host Katie Couric has a new memoir out, “Going There,” where she holds little back, criticizing both herself and and others who came across her path, including disgraced TV host Matt Lauer. She said he was a predator who nauseated her. The Associated Press has the story:

NEW YORK (AP) — On a summer day in the Hamptons last year, Katie Couric and her husband, John Molner, went out for a walk and saw a familiar white jeep drive by with Matt Lauer at the wheel.

No waves, no hellos. Couric writes in her new memoir, “Going There,” that she realized then that the television partners would never speak again.

Once the king and queen of morning television, Matt and Katie were regular “guests” in the homes of millions of Americans, delivering the news with friendly banter. Yet as the drive-by suggests, much can change in 20 years. Couric today is less visible after a series of jobs that didn’t quite work out, while Lauer was fired from the “Today” show in 2017 after stories about sexual misconduct emerged.

Couric’s book, which is out Oct. 26, recounts in raw terms her difficulty processing what she learned about the man she worked beside on most weekday mornings from 1997 to 2006.

“I know Matt thinks I betrayed him, and that makes me sad,” Couric writes. “But he betrayed me, too, by how he behaved behind closed doors at the show we both cared about so much.”

Even to Couric, the news came as a shock. They didn’t socialize much outside the studio. One exception was a dinner two weeks before he was fired, where they kicked around ideas for a future project. She writes that “I felt closer to Matt that night than I had in all my years sitting next to him at the anchor desk.”

In the book, Couric prints text messages that chronicle the disintegration of their relationship, from when she reached out following his firing to his unsuccessful effort to connect at 4 a.m. one day that week. A turning point came when she heard about his alleged treatment of a young woman that she had brought to NBC. “It nauseated me,” she writes.

“So many of us were blindsided, never imagining that a dashing, witty, beloved TV star had such a dark side,” she writes. “I’ve come to realize that Matt could be an excellent professional partner, a good friend, and a predator.”

Lauer has said that he never assaulted anyone or forced anyone to have sex.

As an author, Couric “goes there” with plenty of sharp stories about those she’s encountered along the way. There’s the CNN executive who commented on her breasts, awkward encounters as a young reporter with Larry King and Neil Simon and CBS News executives she feels wronged her.

One of her closest professional partners, former “Today” executive producer and current CNN chief Jeff Zucker, doesn’t escape unscathed. They worked together again on Couric’s short-lived daytime talk show from 2012 to 2014, where she suspected he was biding his time for something better. She writes that Zucker asked her for a recommendation for the CNN position, saying there would be a job for her there if he got it.

After CNN hired him, “I never did hear from him about that job,” she says.

Couric’s biggest professional move was leaving “Today” for CBS News in 2006, to take over as anchor of the “CBS Evening News” and report for “60 Minutes.” It proved disastrous.

“When someone said the stains on the carpet at NBC were coffee while the stains at CBS were blood, instead of chuckling, maybe I should have listened … I was so hell-bent on taking a stand for women, I didn’t consider the woman who would be at the center of the storm — me,” she writes.

While Couric has harsh words for others, she’s also unsparing in writing about her own mistakes, from an interview she’d like to have back with Elizabeth Edwards, the late wife of former Sen. John Edwards, to an unnecessary remodel of her CBS News office that earned her enemies. She’s received pre-publication publicity for writing about her regrets in withholding a potentially damaging quote given to her by the late Supreme Court Justice Ruth Bader Ginsburg, and her reluctance, in a competitive business, to help other women.

Couric also tells of an embarrassing night downing shots at a disco where she got so sick she ended up in the hospital. She almost kept it a secret, until a contestant on “Jeopardy!” told Alex Trebek that “I once did a flaming Statue of Liberty at a bar with Katie Couric!”

The heart of her book, including some of the most painful self-evaluations, comes in detailing the death of her husband, lawyer Jay Monahan, of colon cancer at age 42 in 1998.

She clearly has regrets, and writes frankly about wishing they had gone to couple’s therapy for help navigating through changes in their relationship brought on by her sudden fame at “Today.”

In taking control of his fight against cancer, Couric said she kept from him some of the grimmest news about his prospects.

“Why was I so afraid to talk to Jay about the inevitable?” she writes. “Why weren’t we straight with each other and admit that this was not solvable, not fixable, and that our storybook life together would end after just a few chapters? I remember thinking I did not want to destroy the time Jay had left by admitting defeat, leaving him with little choice but to wait for death to take him. I think I was a coward.”

His fight led her into cancer activism, including a colon cancer screening she did on “Today.” She says she hopes the first line of her obituary identifies her as a tireless advocate for cancer awareness and research.

Couric raised their daughters, who watched their mom cycle through a series of ill-fated relationships in the public eye. She recalled being contacted for reaction from the New York Post when one beau moved out of her apartment.

Now 64, she’s settled down with Molner, with whom she runs a media company.

“It took me 16 long years and so many false starts,” she writes, a reference to their 2014 wedding. “After all this time and all my searching, it felt like I had made my way home.”