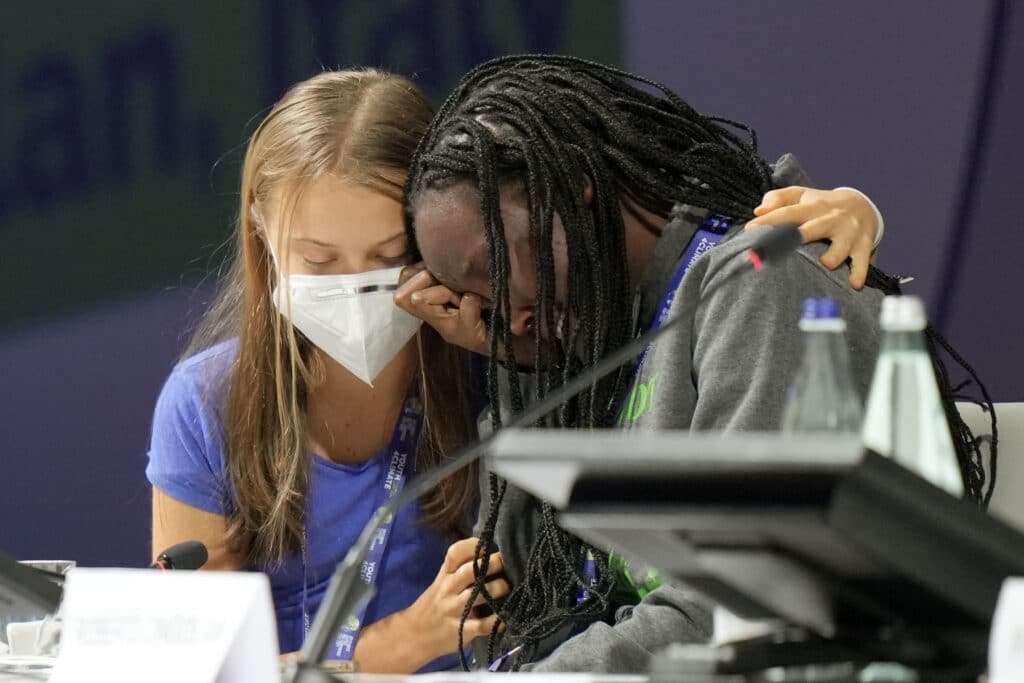 The too much “blah, blah, blah,” is coming from climate activists Vanessa Nakate and Greta Thunberg and not world leaders as the two-point fingers at inactivity on climate concerns, and even expressed doubts about the impact a youth climate gathering in Mulan, Italy will have. Four hundred climate activists from 180 countries were invited to Italy’s financial capital for a three-day Youth4Climate summit that will send its recommendations to a major United Nations climate summit. The Associated Press has the story:

World leaders have to look at costs, while activists look at only one outcome, from one viewpoint

They even cast doubt on the intentions behind a youth climate gathering where they were speaking in Milan.

Four hundred climate activists from 180 countries were invited to Italy’s financial capital for a three-day Youth4Climate summit that will send its recommendations to a major United Nations climate summit in Glasgow, Scotland, that begins Oct. 31. But participants are demanding more accountability from leaders and a bigger official role for young people.

“They invite cherry-picked young people to pretend they are listening to us,” Thunberg said. “But they are not. They are clearly not listening to us. Just look at the numbers. Emissions are still rising. The science doesn’t lie.

“Leaders like to say, ‘We can do it.’ They obviously don’t mean it. But we do,” the Swedish activist said.

Nakate, a 24-year-old activist from Uganda, said pledges of 100 billion euros ($117 billion) a year to help countries particularly vulnerable to the impact of climate change has not materialized, even as wildfires in California and Greece and floods in Germany and Belgium show that “loss and damage is now possible everywhere.”

Nakate dramatically underlined how climate change is affecting the African continent, “which is ironic given that Africa is the lowest emitter of CO2 emissions of any continent except Antartica.”

Just last week, she said she saw police taking away a body that had been washed away by violent storms in the Ugandan capital of Kampala, while others searched for more victims. Her mother told her that one man dragged off by the water had been trying to save the goods he was selling from being washed away.

Nakate collapsed in tears after her emotional speech, getting comfort from Thunberg, who followed her to the podium that was too tall for her small stature.

Thunberg, who coalesced the global protest movement Fridays for Future, optimistically said it wasn’t too late to reverse climate trends. But she has clearly heard enough from leaders, whom she said have been talking for 30 years while half of all carbon emissions have occurred since 1990, one-third since 2005.

“This is all we hear from our so-called leaders: Words. Words that sound great but so far have led to no action. Our hopes and dreams drown in their empty words and promises. Of course we need constructive dialogue, but they have now had 30 years of blah, blah blah. And where has this led us?” she said.

The three-day Youth4Climate Summit will be followed by a two-day pre-COP meeting before Glasgow aimed at finding common ground on sticking points among countries, which range from the world’s big carbon emitters to developing nations that are lagging both economically and technologically.

In addition, Turkey has said it would adhere to the Paris protocols and South Africa announced more ambitious emissions targets.

“These are good steps,” said Italy’s minister for ecological transition, Roberto Cingolani, who is hosting the Milan meetings. “They mean that they are moving in the right direction. … I never expect quantum jumps in this gigantic operation on a world level. But the indicators are all good.”