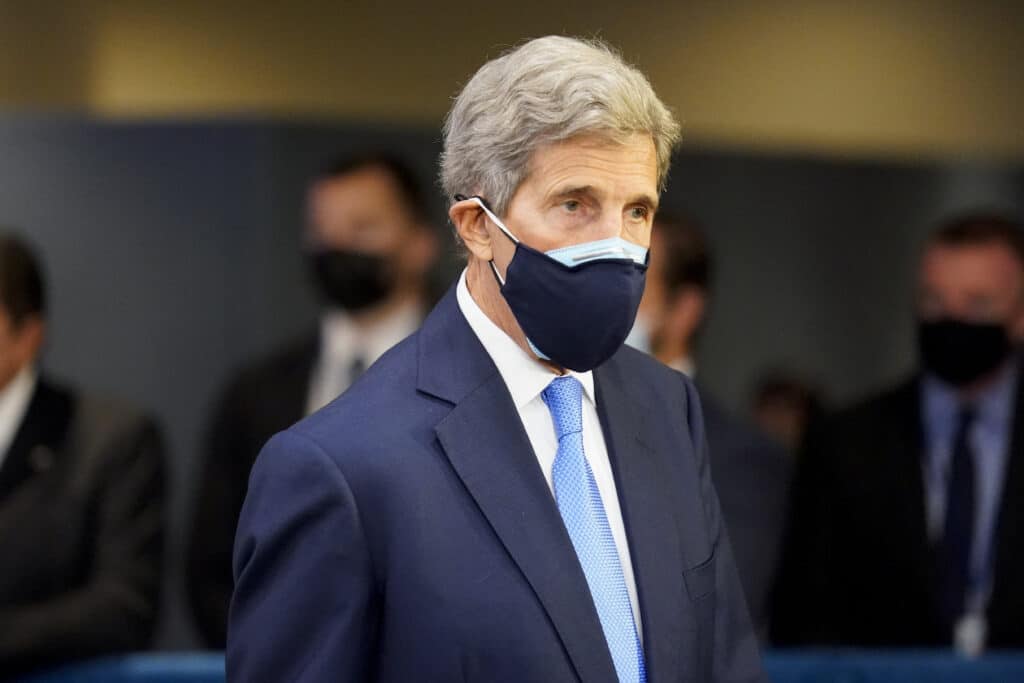 John Kerry said Saturday he thinks progress can be made at the upcoming United Nations climate talks in Scotland, we all know the one, where the U.S. will undoubtedly try to be blamed again, for all climate change. Kerry attended a preparatory meeting in Milan where delegates from around the world sought to identify where progress can be made. The Associated Press has the story:

MILAN (AP) — U.S. climate envoy John Kerry said Saturday he thinks “enormous progress” can be made at the upcoming U.N. climate talks in Scotland, but more governments must come up with concrete commitments in the next 30 days.

Kerry attended a preparatory meeting in Milan where delegates from around the world sought to identify where progress can be made before the U.N. climate change starts in Glasgow on Oct. 31.

The 12-day summit aims to secure more ambitious commitments to limit global warming to well below 2 degrees Celsius with a goal of keeping it to 1.5 degrees Celsius compared to pre-industrial levels. The event also is focused on mobilizing financing and protecting vulnerable communities and natural habitats.

“The bottom line is, folks, as we stand here today, we believe we can make enormous progress in Glasgow, moving rapidly towards the new goals that the science is telling us we must achieve,” Kerry said. That means achieving a 45% reduction in carbon emissions in the next 10 years.

“This is the decisive decade,” Kerry said.

Kerry, a former U.S. senator and secretary of state, said that countries representing 55% of the world’s gross domestic product — Britain, Canada, Japan, the United States and the 27 European Union members — have submitted plans that hit the 1.5 degrees target by reducing greenhouse gas emissions.

But the American diplomat also noted that the 89 new national submissions ahead of the summit would only cut emissions by 12%, and that the sum of all 191 submissions as they are currently written would increase emissions between now and 2030 by 16%.

Kerry declined to single out any country but said there are ways to achieve lower emissions that aren’t that expensive, including organizing power grids and making transmissions more efficient.

China is the world’s biggest emitter of greenhouse gases, and the United States is second. Kerry said U.S. President Joe Biden has had “constructive” talks on the subject with Chinese President Xi Jinping. Kerry also highlighted commitments by India’s leader to install 450 gigawatts of renewable power over the next decade.

“Glasgow, my friends, is around the corner. It is the starting line of the race of centuries and the race of this decade,” he said. “All countries have to sprint and join together to understand that we are all in this together.”

Kerry added “This is the test of collective multilateralism to the highest level that I have seen in my public career.”

Timmermans said the financing needs going forward would be much greater than that amount, and that public funding alone would not be able to cover the anticipated price tag, which runs in the trillions.

Already the Earth has seen a 1-degree Celsius temperature change and unpredictable weather patterns that have destroyed harvests and killed livelihoods around the world, Timmermans said.

Alok Sharma, Britain’s president for COP26, said “delivering on (the) $100 billion is absolutely a matter of trust.” He also said the presence of youth delegates and activists, including Greta Thunberg and Vanessa Nakate, ahead of the climate summit preparatory meetings had energized the process.

“As we go forward of the next few weeks and into COP, we must always keep the voices of the young people foremost in our minds and think about what their response would be to the outcomes that we reach,” Sharma said.

Previous Article
Yukon River tribes pushed to brink as Alaska’s salmon vanish
Next Article
Game of Drones: A Shifting Balance of Power in the Maghreb