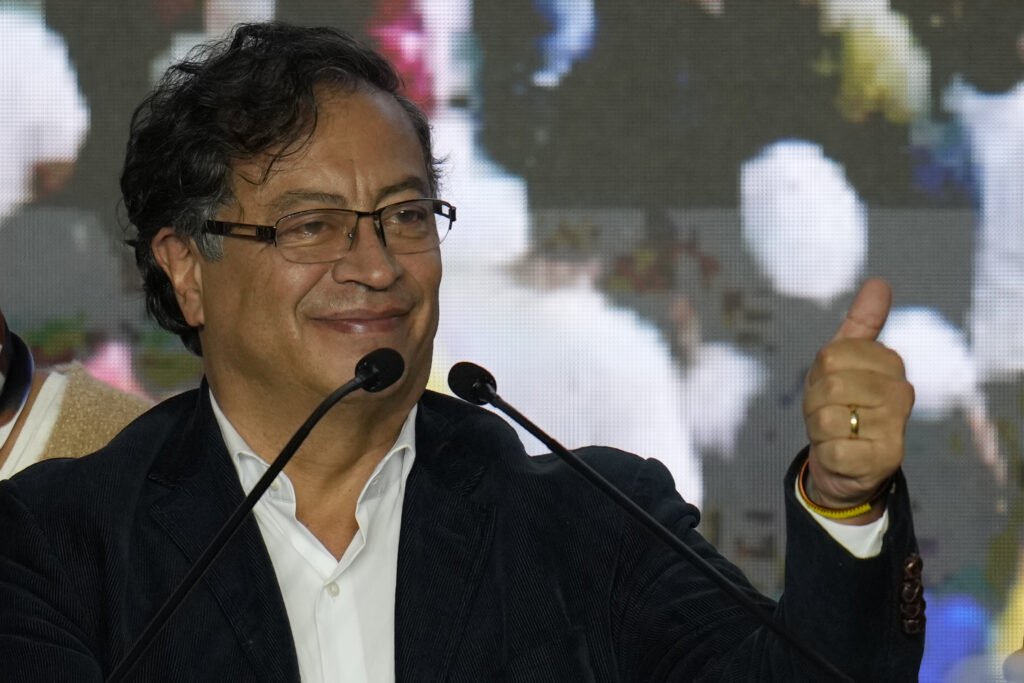 Leftist Sen. Gustavo Petro led the field of six candidates Sunday with just over 40% of the votes, no real surprise there, it seems the Latin American country is looking to get away from the conservatives and moderates, who have done little to help the population out of poverty. Real estate tycoon Rodolfo Hernández, who has no close ties to any political parties, finished second with more than 28%, election officials reported. As reported by the AP:

BOGOTA, Colombia (AP) — Colombian voters opted for a dramatic change in presidential politics, choosing a leftist former rebel and an outsider populist businessman to advance to a runoff election in June amid hopes a new face can pull them out of the economic damage from the pandemic.

Leftist Sen. Gustavo Petro led the field of six candidates Sunday with just over 40% of the votes, while real estate tycoon Rodolfo Hernández, who has no close ties to any political parties, finished second with more than 28%, election officials reported.

Both are far different from the conservatives and moderates that have long governed the South American country.

Petro, the front-runner throughout the campaign, could become Colombia’s first head of state from the left, which for years has been marginalized for its perceived association with the nation’s armed conflict. Hernández, whose showing surprised many, has been compared to former U.S. President Donald Trump for his anti-establishment rhetoric.

They will face off June 19 in the same polarized environment and growing discontent over increasing inequality and inflation that shadowed the election’s first round. A candidate needed 50% of the votes to win outright in the opening round.

There has been a series of leftist political victories in Latin America, where voters have been dissatisfied with the economic situation. Chile, Peru and Honduras elected leftist presidents in 2021, and in Brazil, former President Luiz Inácio Lula da Silva is leading the polls for this year’s presidential election. Mexico elected a leftist president in 2018.

A victory by Petro could pose challenges to the U.S., which has backed Colombia’s fight against leftist rebels and drug traffickers for decades.

Petro wants to renegotiate a free trade agreement with the U.S. that has boosted imports of American products like powdered milk and corn. and instead favor local producers.

He also promises to change how Colombia fights drug cartels that produce around 90% of cocaine currently sold in the U.S. The senator often criticizes U.S. drug policy in the hemisphere, saying it focuses too much on eradicating illegal crops and arresting kingpins. He wants to boost help for rural areas, to give farmers alternatives to growing coca, the plant used to make cocaine.

Hernandez, meanwhile, won in some of Colombia’s most traditionally conservative departments. “The rejection of the status quo even among many of the most conservative Colombians … really does show a disgust with the traditional workings of Colombian politics,” said Adam Isacson, an expert on Colombia at the Washington Office on Latin America think tank.

Hernandez surged at the campaign’s end to slip past Federico Gutierrez, a former mayor of Medellin who was seen as the continuity candidate and ran on a pro-business, economic growth platform.

Petro has promised to make significant adjustments to the economy, including tax reform, and to change how Colombia fights drug cartels and other armed groups. Hernández promises to reduce wasteful government spending and to offer rewards for people who report corrupt officials.

“What is in dispute today is change. The political parties allied to the government of (incumbent Ivan) Duque, his political project, has been defeated in Colombia,” Petro told his supporters as they celebrated at his campaign headquarters in Bogotá. He said the vote sends “that message to the world: A period is ending; an era is ending.”

Hernández, in a livestream after early results showed he advanced to the runoff, said he remains committed to end “corruption as a system of government.”

“These next few days will be decisive in determining the future of the country,” he said.

This was the second presidential election held since the government signed in 2016 a peace agreement with the Revolutionary Armed Forces of Colombia, known as FARC for its initials in Spanish. But the divisive agreement was not a main issue during the campaign, which focused on poverty, inflation and other challenges exacerbated by the pandemic.

It is Petro’s third attempt to become president. He was defeated in 2018 by Duque, who was not eligible to seek reelection.

In a sign of the resistance to a leftist government, Gutierrez endorsed Hernández shortly after he failed to advance to the runoff.

“Knowing that our position is decisive for the future of Colombia, we have made a decision … We do not want to lose the country,” Gutierrez said, adding that he would support Hernández because he does not want to put Colombia “at risk.”

Petro was once a rebel with the now-defunct M-19 movement and was granted amnesty after being jailed for his involvement with the group.

Some see comparisons to Trump in Hernandez, the former mayor of the north-central city of Bucaramanga.

A Gallup poll conducted earlier this month said 75% of Colombians believe the country is heading in the wrong direction and only 27% approve of Duque.

The pandemic set back the country’s anti-poverty efforts by at least a decade. Official figures show that 39% of Colombia’s 51.6 million residents lived on less than $89 a month last year, which has a slight improvement from 42.5% in 2020.

“The vote serves to change the country and I think that this responsibility falls a lot on young people who want to reach standards that allow us to have a decent life,” said Juan David González, 28, who voted for the second time in a presidential election.

The new president will have to decide whether to resume peace talks, suspended by Duque, with the National Liberation Army, a guerrilla group founded in the 1960s. The president will also have to deal with violence from FARC dissidents who rejected the peace accord as well as the Gulf Clan cartel.

And corruption is on many Colombians’ minds.

“Corruption in state entities is the main problem in the country,” said voter Édgar González in Bogotá. “… A very big change is taking place in the country’s politics and if we all exercise the right, we are going to achieve that change.”