Confederate stained-glass windows on cathedral to be replaced 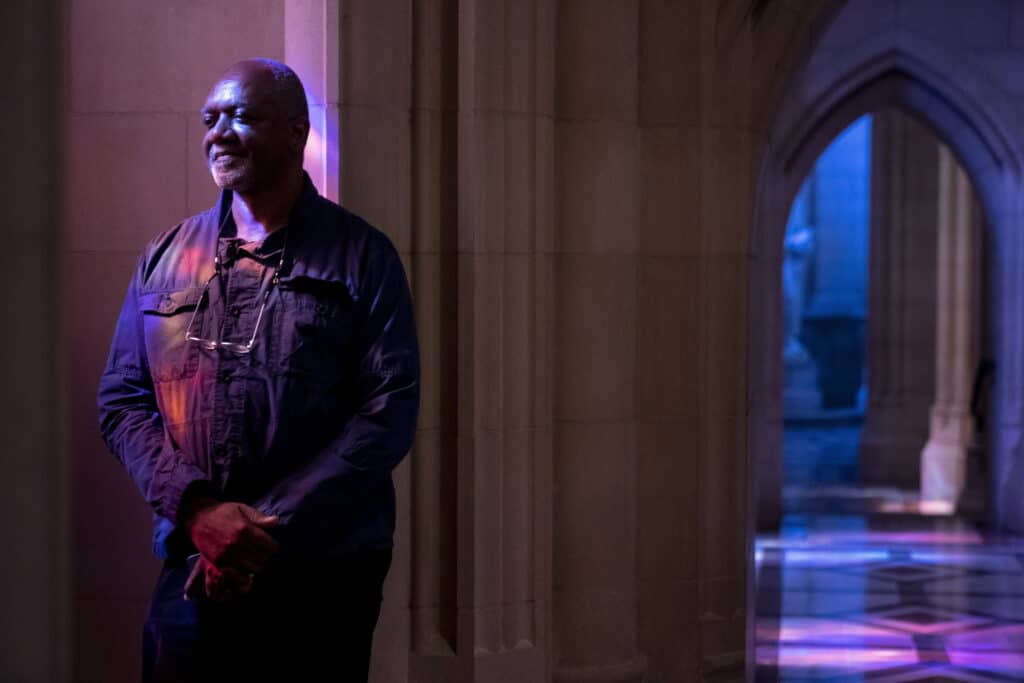 Contemporary artist Kerry James Marshall has been chosen to design new stained-glass windows for the Washington National Cathedral to replace a set that honored Confederate generals Robert E. Lee and Stonewall Jackson. The former set was removed in 2017. The Associated Press has the story:

(AP) Washington National Cathedral announced Thursday it has chosen contemporary artist Kerry James Marshall, renowned for his wide-ranging works depicting African American life, to design new stained-glass windows with themes of racial justice that will replace a set with Confederate imagery that were removed in 2017.

The landmark sanctuary said in a statement that the four windows will tell “a new and more complete” story of the nation’s racial history. Poet Elizabeth Alexander will write a poem to be inscribed in stone tablets alongside the windows, overlaying older ones that venerated the lives of Confederate soldiers.

The project is expected to be completed by 2023.

The windows will replace a set that honored two Confederate generals, Robert E. Lee and Stonewall Jackson, with saint-like reverence and had included a Confederate flag. The cathedral removed them in 2017, prompted by a larger national reckoning over Confederate imagery and white supremacy in the wake of deadly right-wing attacks in Charlottesville, Virginia, that year and in Charleston, South Carolina, in 2015. The window openings have been covered with plywood since 2017.

The setting is particularly significant in the massive neo-Gothic cathedral, which is filled with iconography depicting the American story in glass, stone and other media, with images ranging from presidents to famous cultural figures and state symbols.

The cathedral, also the seat of the Episcopal Church’s presiding bishop and Diocese of Washington, regularly serves as the setting for ceremonies tied to major national events.

In replacing the windows, the cathedral acknowledged a need to correct what it called a “false narrative of what America once was.”

The old windows “were a barrier to our mission and impediment to worship in this place, and they had no place being in sacred space,” the Very Rev. Randolph Marshall Hollerith, dean of the cathedral, said in a Thursday news conference.

“This is a once-in-a-generation opportunity for the cathedral to not only create beautiful art but to stake a claim about what and who we value,” he added.

Marshall, who made his first visit to the cathedral this week, said it’s too soon to say what the new windows will look like.

“It was really important for me to come here and really get a sense of what the place is, what’s already here, what the mission they’ve tried to accomplish is, and then how I might be able to fit whatever it is the cathedral needs in order to fulfill its ambition for these windows … into that space,” he said at the news conference.

He noted that the cathedral set a “monumental” goal of having the windows depict the pain as well as the dignity of “the African-American struggle for justice and equality.”

“This is something that’s actually going to take a lot of time, because history itself, as most people know, is a very complicated narrative,” he said.

Hollerith called Marshall “one of the greatest artists of our time” and praised Alexander as “one of our nation’s most eloquent and compelling voices.”

This will be Marshall’s first work in the stained-glass medium after a long and acclaimed career using a variety of media to create portraits and other works depicting Black life. Marshall was a MacArthur Fellow in 1997.

Alexander, president of the Mellon Foundation, recited one of her poems at the 2009 inauguration of President Barack Obama and has published multiple books including Pulitzer Prize finalists.

She said in a statement that she was honored to be part of the cathedral’s “effort to ensure that those who worship within its sanctuary know that it is truly a space for all people, and that the stories relayed through its sacred walls, windows and other iconography represent the truth of our nation.”

The cathedral has loaned the Robert E. Lee window to the National Museum of African American History and Culture for a new exhibit, “Make Good the Promises: Reconstruction and Its Legacies.” The museum said the window represents the “myth-building and the nationwide intimidation of African Americans through the embrace of Confederate symbols.”

By PETER SMITH
Associated Press religion coverage receives support from the Lilly Endowment through The Conversation U.S. The AP is solely responsible for this content.