Covid 19 latest news and measures in the U.S. and the world 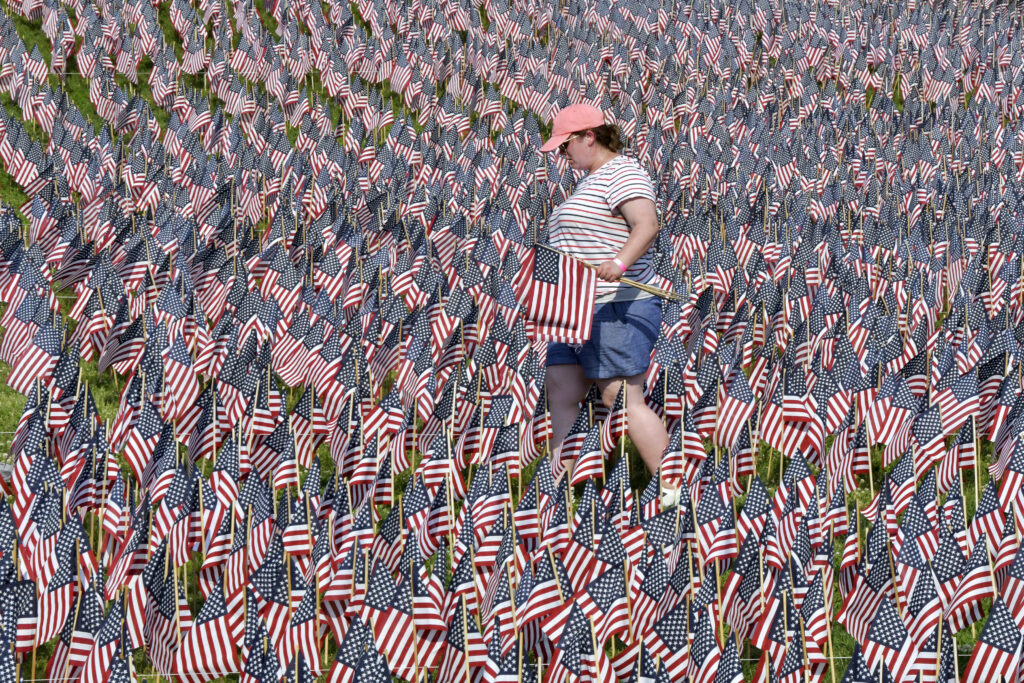 Covid 19 latest news and measures in the U.S. and the world

Thousands of people packed inside a Paris arena for a concert Saturday as part of a public health experiment to prepare France to host big events again.

The show at AccorHotels Arena in eastern Paris featured 1980s French rock band Indochine and DJ Etienne de Crecy. But the attention was mostly on the concert-goers.

The Paris public hospital authority helped organize the event to determine whether it’s safe to allow 5,000 people wearing masks to dance together in the open pit of an indoor concert without social distancing.

The attendees got to see the show for free but were required to take three virus tests, two before and one after the concert. To further reduce risk, organizers only allowed people 18-45 years old without underlying health conditions to participate, according to the hospital authority.

France’s cultural venues were shut for most of the past 14 months as authorities tried to contain persistent surges of virus infections that filled hospitals and were linked to more than 109,000 deaths.

Vietnam has discovered a new coronavirus variant that’s a hybrid of strains first found in India and the U.K., the Vietnamese health minister said.

Health Minister Nguyen Thanh Long said Saturday that scientists identified the variant while examining the genetic makeup of the virus that had infected some recent patients. He said lab tests suggested it might spread more easily than other versions of the virus.

Long says the new variant has spread to 30 of Vietnam’s 63 municipalities and provinces, and could be responsible for a recent surge in confirmed cases.

Viruses often develop small genetic changes as they reproduce, and new variants of the coronavirus have been seen almost since the one that causes COVID-19 was first detected in China in late 2019.

Related: Vietnam to test everyone in large city

The World Health Organization has listed four global “variants of concern” – the ones found in the U.K. and India, plus two more identified in South Africa and Brazil.

Vietnam initially stood out in its success battling the virus. As of early May, it had recorded just over 3,100 confirmed cases and 35 deaths since the start of the pandemic.

But in the last few weeks, the country has confirmed more than 3,500 new cases and 12 more deaths.

It’s back to nearly normal in Massachusetts. Gov. Charlie Baker lifted almost all COVID-19 restrictions on Saturday, including a statewide face covering mandate that has been in place during much of the pandemic.

The mandate is being replaced with a mask advisory that echoes recommendations from federal health officials. Unvaccinated individuals still are encouraged to wear masks in public areas, especially indoors.

There are locations where masks will remain required, including on public transportation.

Baker has also said that some businesses may still require customers and visitors to continue wearing masks inside. Customers should respect those businesses and don a mask while inside, the governor said Friday.

Some of the hardest hit businesses have been restaurants, which can now welcome back visitors for indoor dining without restrictions.

About half the state’s population is fully vaccinated.

Oklahoma state agencies are barred from requiring a mask or coronavirus vaccination as a condition of being allowed to enter a state building or office under an executive order signed by Gov. Kevin Stitt.

“It is time to return to normal,” Stitt said in a statement after signing the order Friday. “Every Oklahoman must have access to all government services whether or not they choose to be vaccinated or wear a mask.”

The order was announced after Stitt signed into law a bill prohibiting schools and colleges from adopting mask or vaccination requirements. It, does not apply in medical settings with patients,

Stitt refused to issue a statewide mask mandate but in November required masks inside state buildings, an order he lifted in March.

The Oklahoma State Department of Health on Friday reported 452,777 total coronavirus cases since the pandemic began and 1,214 currently active cases in the state.

The Duchess of Cambridge has received her first dose of COVID-19 vaccine as Britain extends its inoculation program to younger residents.

The 39-year-old wife of Prince William formerly known as Kate Middleton received her shot at London’s Science Museum, a mass vaccination center near the couple’s home at Kensington Palace, according to a photo posted on their Twitter feed.

Kate got her shot Friday, a few weeks after her husband.

“I’m hugely grateful to everyone who is playing a part in the rollout — thank you for everything you are doing,” the duchess said in a tweet posted Saturday.

Britain this week extended its COVID-19 vaccination program to everyone over the age of 30. The program has been gradually expanded to progressively younger age groups since it began in early December, and more than 70% of adults have already received at least one dose.

Other members of the royal family, including Queen Elizabeth II and Prince Charles, publicized their vaccine appointments to encourage people to get their shots.

Lebanon’s health authorities launched a COVID-19 vaccination “marathon” to speed up inoculations around the country, including areas where turnout has so far been low.

The daylong campaign offered AstraZeneca vaccines at 30 different centers around the country without advance appointments to encourage people over age 30 to show up. Lebanon’s capital, Beirut, was not included in the campaign.

As of Saturday afternoon, 7,700 people had been vaccinated in the push.

A vaccination program that started in February targeted older age groups, primarily through registration on a government-operated platform and appointments.

Photos of lines outside centers north of Beirut showed high turnout for the appointment-less drive, particularly among foreign workers, many of whom had been reluctant or unable to register on the government-operated digital platform. There were also lines in towns and villages in the east and mountains, where turnout has so far been fickle.

The pace of COVID-19 vaccinations in Alabama has fallen to a level not seen since the earliest days of the immunization campaign even though less than 30% of the state’s population is fully vaccinated.

Statistics from the Alabama Department of Public Health showed Friday that the number of people getting shots in recent days was similar to the rate in January, when vaccine supply was still very limited.

Officials are worried that large numbers of people are simply refusing to get shots, meaning the threat of the new coronavirus will remain higher than necessary.

“It’s very distressing because we have vaccine and we have it in every corner of Alabama,” said Dr. Karen Landers, assistant state health officer.

Several vaccination sites have closed because of the lack of demand, and some areas have considered turning down vaccine shipments. In Opelika, East Alabama Medical Center said “very low demand” and plenty of vaccine supply meant a community clinic would close after giving patients a second round of shots on June 14.

Coronavirus infections, hospitalizations and deaths are plummeting across the continent, after Europe led the world in new cases last fall and winter in waves that cost hundreds of thousands of lives, forced more rolling lockdowns and overwhelmed intensive care units.

Now, vaccination rates are accelerating across Europe, and with them, the promise of summer vacations on Ibiza, Crete or Corsica. There are hopes for a rebirth of a tourism industry that in Spain and Italy alone accounts for 13% of gross domestic product but was wiped out by the pandemic.

Europe saw the largest decline in new COVID-19 infections and deaths this week compared with any other region, while also reporting about 44% of adults had received at least one dose of vaccine, according to the World Health Organization and European Centre for Disease Prevention and Control.

Europe’s seven-day rolling average for new cases per 100,000 people had been higher than any other region from mid-October through the beginning of December, then from early February through April, according to an Associated Press analysis of data from Johns Hopkins University.

The Philippines has lifted a ban on the deployment of workers to Saudi Arabia, which it imposed after receiving reports that workers were being asked to shoulder COVID-19 test and quarantine costs in the oil-rich kingdom.

Philippine Labor Secretary Silvestre Bello III said that after Saudi Arabia formally notified his country Saturday that recruitment agencies and Saudi employers would bear the costs of tests and 10 days of quarantine for Filipinos, he decided to lift the ban.

The ban, which Bello imposed Thursday, prevented more than 400 Filipino workers from boarding their Philippine Airlines flights for Saudi Arabia on Friday. Many were stranded at the Manila airport, with some begging in tears for the government to immediately lift the ban.

“I apologize for the inconvenience and momentary anguish that it may have caused our dear overseas Filipino workers,” Bello said, but added “our Saudi-bound workers will no longer be disadvantaged.”

The Philippines is a leading source of global labor. Its regulations require recruitment agencies and foreign employers to cover the costs of COVID-19 tests and quarantines, which would be a financial burden to the mostly poor workers.

Afghanistan’s Health Ministry announced the shutdown of all public and private universities and schools in the country’s 16 provinces, including Kabul, for at least two weeks starting Saturday.

The decision follows a surge in cases. On Friday, 977 people tested positive for COVID-19 and 18 died, most of them in Kabul. Only 3,800 were tested.

Over 600,000 people have received a first dose of the AstraZeneca vaccine, the ministry said, without counting the armed forces. The vaccination drive has been put on hold due to shortages and the remaining stocks are reserved for those who got the first shot.

China on Saturday reported 16 new confirmed coronavirus cases including two authorities said were believed to have been acquired locally.

The two locally transmitted cases were in Guangdong province in the south, adjacent to Hong Kong, the National Health Commission reported. It said the other infections are believed to have been acquired abroad.

Georgia Gov. Brian Kemp declared Friday that public schools no longer have his permission to require masks for coronavirus protection, though his executive order fell short of banning such mandates outright.

The Republican governor’s written order came two days after Kemp declared: “The time for mandates is over.”

“We’re not going to have a mask mandate for our kids,” Kemp said. “Our teachers have had the ability to get vaccinated. It certainly doesn’t keep anyone from wearing a mask.”

Instead, Kemp’s order says Georgia school districts can no longer claim their authority to require masks comes from the governor.

It’s unclear how many Georgia districts ever required employees and students to wear masks. While a number of Atlanta school districts enforced the requirement, many districts in outer suburbs and rural areas only strongly recommended masks.