Cruise industry opening up in Italy despite lockdown 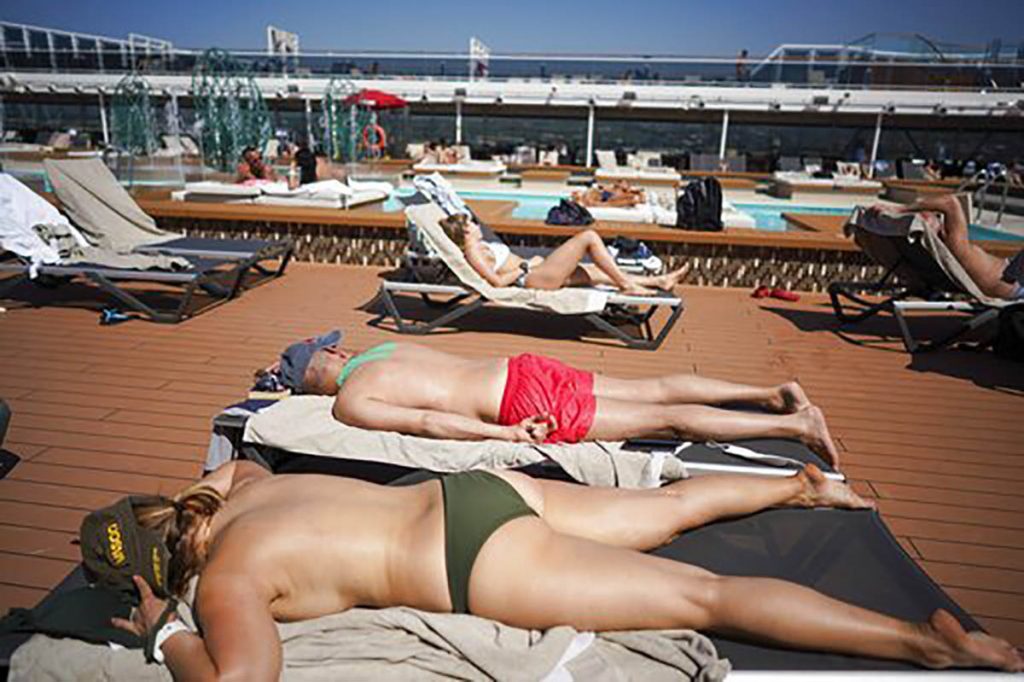 Hard hit by the coronavirus pandemic, the cruise industry is finally beginning to rebound. In Italy, people are excited to leave the nation’s lockdown to party on ships like the MSC Grandiosa, where they can sit at a pool without a mask as long as they have been tested for COVID-19. The U.S. cruise industry lags behind opening up, however. The Associated Press has the story:

ABOARD THE MSC GRANDIOSA (AP) — Italy may be in a strict coronavirus lockdown this Easter with travel restricted between regions and new quarantines imposed. But a few miles offshore, guests aboard the MSC Grandiosa cruise ship are shimmying to Latin music on deck and sipping cocktails by the pool.

In one of the anomalies of lockdowns that have shuttered hotels and resorts around the world, the Grandiosa has been plying the Mediterranean Sea this winter with seven-night cruises, a lonely flag-bearer of the global cruise industry.

After cruise ships were early sources of highly publicized coronavirus outbreaks, the Grandiosa has tried to chart a course through the pandemic with strict anti-virus protocols approved by Italian authorities that seek to create a “health bubble” on board.

Passengers and crew are tested before and during cruises. Mask mandates, temperature checks, contact-tracing wristbands and frequent cleaning of the ship are all designed to prevent outbreaks. Passengers from outside Italy must arrive with negative COVID-19 tests taken within 48 hours of their departures and only residents of Europe’s Schengen countries plus Romania, Croatia and Bulgaria are permitted to book under COVID-19 insurance policies.

On Wednesday, the Grandiosa left the Italian port of Civitavecchia for its weeklong Easter cruise, with 2,000 of its 6,000-passenger capacity and stops planned in Naples and Valletta, Malta, before returning to its home port in Genoa.

Passengers welcomed the semblance of normalcy brought on by the freedom to eat in a restaurant or sit poolside without a mask, even if the virus is still a present concern.

“After a year of restrictive measures, we thought we could take a break for a week and relax,” said Stefania Battistoni, a 39-year-old teacher and single mother who overnight from Bolzano, in northern Italy, with her two sons and mother to board the cruise.

The pandemic has plunged global cruise ship passenger numbers from a record 30 million in 2019 to more than 350,000 since July 2020, according to Cruise Lines International, the world’s largest cruise industry association representing 95% of ocean-going cruise capacity. Currently, fewer than 20 ships are operating globally, a small fraction of CLIA’s members’ fleets of 270 ships.

The United States could be among the last cruise ship markets to reopen, possibly not until fall, and not until 2022 in Alaska. Two Royal Caribbean cruise lines that normally sail out of Miami opted instead to launch sailings in June from the Caribbean, where governments are eager to revive their tourism-based economies despite activist concerns about the health and environmental impact.

On the MSC ship, extra cabins are set aside to isolate suspected virus cases. Because of the contact tracing wristbands, if a passenger tests positive, medical personnel can identify anyone with whom they were in contact. Once the situation is clear, anyone who is positive is transferred to the shore.

According to an independent consulting firm, Bermello Ajamii & Partners, just 23 COVID-19 cases have been confirmed on ships since the industry began its tentative relaunch last summer, for a passenger infection rate of 0.006%.

But cruise industry critics say the risk isn’t worth it and add that cruise companies should have taken the pandemic timeout to address the industry’s long-standing environmental and labor problems.

“All large cruise ships burn huge volumes of the dirtiest, cheapest fuel available,” said Jim Ace of environmental group Stand Earth. “Cruise ship companies could have used the COVID shutdown to address their impacts on public health and the environment. Instead, they scrapped a few of their oldest ships and raised cash to stay alive.”

On board, though, passengers are relishing the chance to enjoy activities that have been mostly closed in Italy and much of Europe for a year: a theater, restaurant dining, duty-free shopping and live music in bars.

The rest of Italy is heading back into full lockdown over the Easter weekend, with shops closed and restaurants and bars open for takeout only to try to minimize holiday outbreaks. In addition, Italy’s government imposed a five-day quarantine on people entering from other EU countries in a bid to deter Easter getaways.

“Let’s say that after such a long time of restrictions and closures, this was a choice done for our mental health,” said Federico Marzocchi, who joined the cruise with his wife and 10-year-old son Matteo.

The European cruise industry is looking to expand the reopening this spring.

Cruises are circulating on Spain’s Canary islands in the Atlantic Ocean off the coast of Africa, including the company AIDA catering to German tourists. Costa Cruises, which with MSC is one of Europe’s largest cruise companies, will resume cruises on May 1, with seven-night Italy-only cruises. Costa plans to begin sailing in the western Mediterranean from mid-June.

Britain is opening to cruise ships in May, with MSC and Viking launching cruises of the British Isles, among several companies offering at-sea “staycation” cruises aimed at capturing one of the most important cruise markets. The cruise industry is hoping Greece will open in mid-May, but the country hasn’t yet announced when it will reopen tourism.

The U.S. Centers for Disease Control and Prevention issued a “framework” for resuming cruises in the U.S., but the industry says the health agency hasn’t spelled out the details that companies need to operate their ships. Once the CDC provides technical requirements, industry officials say it takes about 90 days to prepare a ship for sailing.

The cruise companies complain that last fall’s CDC framework is outdated and should be scrapped. They say it was issued before vaccines were available and before the restart of cruises in Europe, which they say have safely carried thousands of passengers under new COVID-19 protocols. And they complain that cruising is the only part of the U.S. economy that remains shuttered by the pandemic.

“Cruisers love to cruise, and they will go where the ships are sailing,” said Laziza Lambert, a spokeswoman for the trade group.

Still, environmentalists pushing back against an earlier restart say the timeout imposed by the pandemic provides a window to address the industry’s issues.

“Large cruise ships pollute our air, our water and contribute to climate change. They are toxic to port communities. And they spread COVID. They exploit workers and put passengers at risk,” Ace said. ”Why should large cruise ships be allowed to return before they have addressed these concerns?”

AP reporters Colleen Barry in Soave, Italy, Nicole Winfield in Rome, and David Koenig in Dallas, contributed to this report.