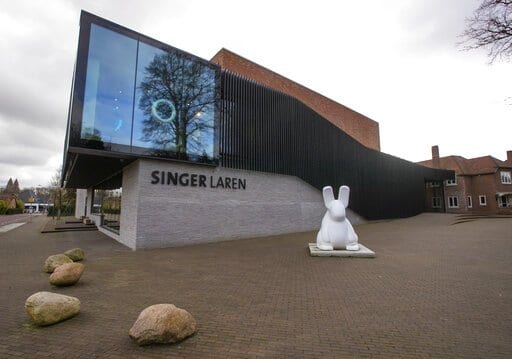 A Van Gogh painting and Frans Hals painting were stolen from Dutch museums last year. A suspect has finally been arrested, although the paintings remain missing. The Associated Press has the story:

THE HAGUE, Netherlands (AP) — Dutch police said Tuesday they have arrested a suspect in the theft last year of two valuable paintings by Vincent van Gogh and Frans Hals from two different museums. The paintings, however, remain missing.

In a statement posted on Twitter, police spokeswoman Maren Wonder said a 58-year-old man was arrested at his home in the Dutch town of Baarn. His identity was not released, in line with Dutch privacy guidelines.

‘The Parsonage Garden at Nuenen in Spring 1884’

“The Parsonage Garden at Nuenen in Spring 1884” by Van Gogh was snatched from the Singer Laren museum east of Amsterdam in the early hours of March 30. The museum was closed at the time due to a coronavirus lockdown.