Ethiopia at a ‘crossroads’ over ethnic fighting 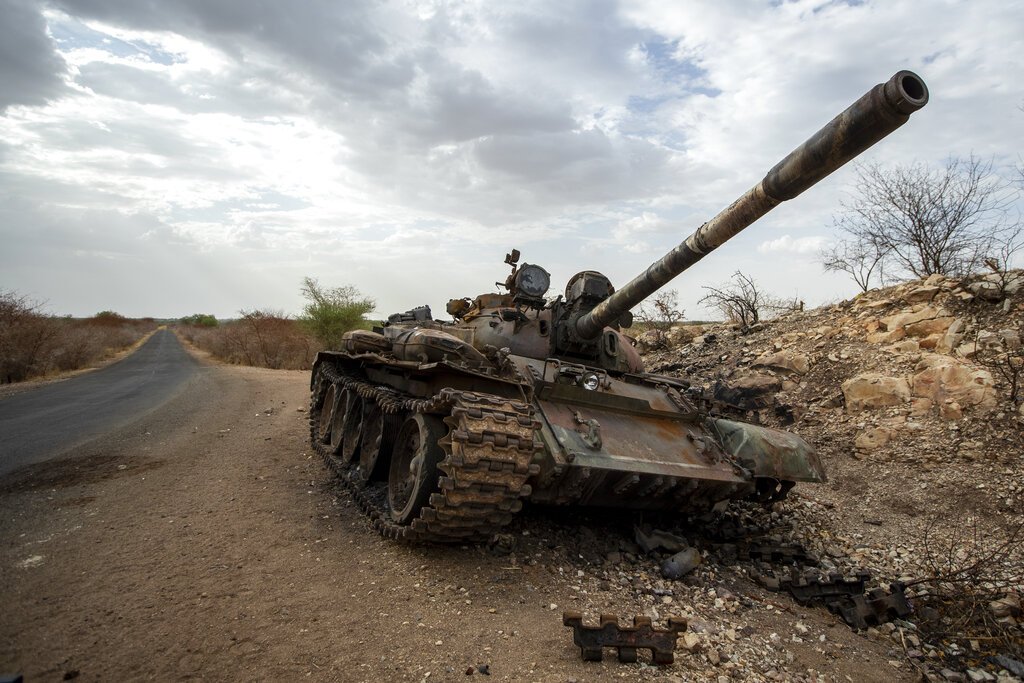 Ethnic nationalism is tearing Ethiopia apart, as the national government asserts its authority in ethnic regions. A military crackdown in Tigray last fall escalated into a war with widespread atrocities and thousands killed. The Associated Press has the story:

A wooden cross in hand, the Orthodox monk in yellow robes insisted that victims of massacres “have the same face.”

Speaking to The Associated Press from the city of Gondar, where he manages a diocesan office, he reflected on the first known massacre of the conflict in the neighboring Tigray region. Ethiopia’s government says ethnic Amhara were killed, but ethnic Tigrayan refugees have told the AP they were also targeted.

“It’s better to say Ethiopians were killed,” the bearded monk said. “If one Amhara is killed and one Tigrayan is killed, it means Ethiopians are killed.” He hopes young people will shun ethnic-driven politics, which he calls “the source of all problems” in this country with more than 90 ethnic groups.

Africa’s second-most populous country, with 110 million people, faces a crisis of ethnic nationalism that some fear could tear it apart as the federal government asserts its authority in regions such as Tigray, where a military operation launched in November to capture the fugitive regional leaders has escalated into a war in which widespread atrocities are reported and thousands have been killed.

Related: US Bans Government Officials from Ethiopia and Eritrea

As that war reaches the six-month mark on Tuesday, there is no sign of how it might be resolved for the Tigray region’s estimated 6 million people. The United Nations human rights office has said all sides are accused of committing abuses against civilians, although far more of the killings, rapes, and mass expulsions are attributed to Ethiopian forces, allied Amhara regional forces, or, especially, troops from neighboring Eritrea.

Over the weekend, Ethiopia’s Council of Ministers almost certainly ended hopes of negotiations for peace when it designated as a terrorist organization the Tigray People’s Liberation Front, or TPLF, the regional party which dominated a coalition of groups that ruled Ethiopia from 1991 until Prime Minister Abiy Ahmed took office in 2018.

The TPLF, like some others in Ethiopia, is an ethnic-based party that has long represented the people of Tigray in accordance with the 1995 constitution, which enshrines ethnic federalism. Under that constitution, regional leaders have been accused of asserting the rights of majority ethnic groups at the expense of minorities.

Tigrayans and the United States government allege ethnic cleansing in western Tigray, where Amhara authorities assert they are reclaiming land that Tigray leaders seized in the 1990s. The term “ethnic cleansing” refers to forcing a population from a region through expulsions and other violence, often including killings and rapes.

Members of other ethnic groups elsewhere say they have been targeted, too. Scores of people have been killed in clashes this year between the Amhara and the Oromo, Ethiopia’s two largest ethnic groups. In the country’s west, the Gumuz have been accused of massacring people from both the Amhara and Oromo groups.

With the rising violence, some in Ethiopia wonder how the government will pull off national elections on June 5. The decision to delay voting from last year because of the COVID-19 pandemic helped to spark the Tigray conflict when the region’s leaders objected, asserted that Abiy’s mandate had ended and held a regional vote of their own.

The European Union this week canceled its election observation mission, saying requirements for its independence and the import of communications equipment — also sought by humanitarian groups for work in Tigray — were not met. Ethiopia in a statement Tuesday replied that external observers “are neither essential nor necessary to certify the credibility of an election.”

Abiy, who has vowed a free and fair vote, will keep his post as prime minister if his Prosperity Party wins a majority of seats in the national assembly.

But there will be no voting in Tigray, where witnesses say fighting persists and local authorities can reject decisions made by the federal government. An AP team that was granted permission to visit Mai Kadra was turned back in nearby Humera by soldiers who said they recognized the authority of Amhara leaders.

The winding road to western Tigray displays the ruins of war: the charred remains of armored personnel carriers, the mangled bed of a truck, the pockmarked walls of an industrial park. There is no phone or internet service. Humera looked deserted. A soldier with a gun slung over his shoulder crossed one street while a lone woman brewed coffee on her veranda.

Thousands of Tigrayans have fled to Sudan or elsewhere

Amhara authorities’ annexation of a vast part of western Tigray has forced hundreds of thousands of Tigrayans to seek refuge elsewhere, including in nearby Sudan.

Some Ethiopians said they believe the country must overcome its ethnic politics by forging a new federation in which ethnicity is not the most important factor.

But there is no agreement on how this can be achieved as Abiy, who came to power as a reformist leader and won the Nobel Peace Prize in 2019 for making peace with Eritrea, moves to centralize power in ways that marginalized Tigray’s now-fugitive leaders.

“No doubt Ethiopia is at a crossroads now,” said Kassahun Berhanu, a professor of political science at Addis Ababa University.

While constitutional recognition of ethnic rights “isn’t bad, it must be streamlined in a way that it does not exclude the need for nationhood. Because these two are not mutually exclusive,” he said. “Ethnic rights can’t be at the expense of essential common belonging. This can be corrected in the course of an amendment.”

Others suggested the constitution may have to be jettisoned in favor of a U.S.-style “territorial federation,” warning that attempts to centralize authority in a powerful prime minister could bring back harsh authoritarianism while attempts at ethnic homogeneity could lead to further atrocities.

Centralization under the military government that ruled Ethiopia violently from 1974 to 1991, as well as ethnic federalism under the successor coalition led by the TPLF, “have been discredited in practice,” said Mahmood Mamdani, a professor of government at Columbia University. “The alternative to both is territorial federalism,” in which all residents of an administrative unit have equal rights, he said.

In a country where the population of regional states is multi-ethnic, “to practice ethnic federalism is to disenfranchise ethnic minorities of rights resident in the unit. This is the root cause of ethnic conflict in most African states. The spreading conflict in today’s Ethiopia is no different,” Mamdani said.

In Gondar, set amid rocky hills, a man in civilian clothes but carrying a rifle described himself as a member of an Amhara militia.

Such militia members are accused of committing abuses in western Tigray. But Nega Wagaw disagreed, saying “militias are the keepers of the peace.”

Another Gondar resident, 22-year-old trader Gashaw Asmare, said he is striving for the national unity that Ethiopia needs.

“Amhara means being Tigrayan. Being Tigrayan means Amhara,” he said. “We Ethiopians are one.”