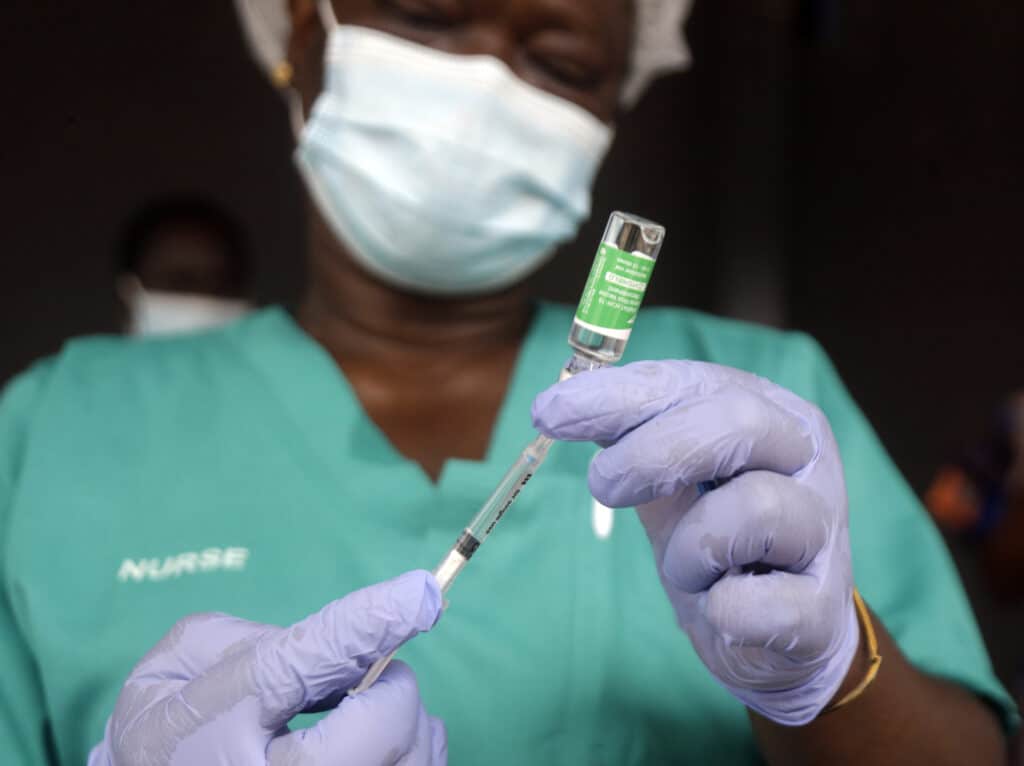 Some people who were vaccinated under the U.N. effort could find themselves banned from EU travel. AstraZeneca has not completed the necessary paperwork, say EU regulators. The Associated Press has the story:

Vaccines manufactured in China and Russia also not on approval list

LONDON (AP) — After Dr. Ifeanyi Nsofor and his wife received two doses of AstraZeneca’s coronavirus vaccine in Nigeria, they assumed they would be free to travel this summer to a European destination of their choice. They were wrong.

The couple — and millions of other people vaccinated through a U.N.-backed effort — could find themselves barred from entering many European and other countries because those nations don’t recognize the Indian-made version of the vaccine for travel.

Although AstraZeneca vaccine produced in Europe has been authorized by the continent’s drug regulatory agency, the same shot manufactured in India hasn’t been given the green light.

EU regulators said AstraZeneca hasn’t completed the necessary paperwork on the Indian factory, including details on its production practices and quality control standards.

But some experts describe the EU move as discriminatory and unscientific, pointing out that the World Health Organization has inspected and approved the factory. Health officials say the situation will not only complicate travel and frustrate fragile economies but also undermine vaccine confidence by appearing to label some shots substandard.

Earlier this month, the European Union introduced its digital COVID-19 certificate, which allows EU residents to move freely in the 27-nation bloc as long as they have been vaccinated with one of the four shots authorized by the European Medicines Agency, have a fresh negative test, or have proof they recently recovered from the virus.

While the U.S. and Britain remain largely closed to outside visitors, the EU certificate is seen as a potential model for travel in the COVID-19 era and a way to boost economies.

The officially EU-endorsed vaccines also include those made by Pfizer, Moderna and Johnson & Johnson. They don’t include the AstraZeneca shot made in India or many other vaccines used in developing countries, including those manufactured in China and Russia.

Individual EU countries are free to apply their own rules for travelers from inside and outside the bloc, and their rules vary widely, creating further confusion for tourists. Several EU countries, including Belgium, Germany and Switzerland, allow people to enter if they have had non-EU-endorsed vaccines; several others, including France and Italy, don’t.

For Nsofor, the realization he could be barred was “a rude awakening.” After a tough year of working during the pandemic in Abuja, Nsofor and his wife were looking forward to a European vacation with their two young daughters, perhaps admiring the Eiffel Tower in Paris or touring Salzburg in Austria.

Nsofor noted that the Indian-made vaccine he received had been authorized by WHO for emergency use and had been supplied through COVAX, the U.N.-backed program to provide shots to poor corners of the world. WHO’s approval included a visit to the Serum Institute of India factory to ensure that it had good manufacturing practices and that quality control standards were met.

“We’re grateful to the EU that they funded COVAX, but now they are essentially discriminating against a vaccine that they actively funded and promoted,” Nsofor said. “This will just give room to all kinds of conspiracy theories that the vaccines we’re getting in Africa are not as good as the ones they have for themselves in the West.”

Ivo Vlaev, a professor at Britain’s University of Warwick who advises the government on behavioral science during COVID-19, agreed that Western countries’ refusal to recognize vaccines used in poor countries could fuel mistrust.

“People who were already suspicious of vaccines will become even more suspicious,” Vlaev said. “They could also lose trust in public health messages from governments and be less willing to comply with COVID rules.”

Dr. Mesfin Teklu Tessema, director of health for the International Rescue Committee, said countries that have declined to recognize vaccines cleared by WHO are acting against the scientific evidence.

“Vaccines that have met WHO’s threshold should be accepted. Otherwise it looks like there’s an element of racism here,” he said.

WHO urged countries to recognize all of the vaccines it has authorized, including two Chinese-made ones. Countries that decline to do so are “undermining confidence in lifesaving vaccines that have already been shown to be safe and effective, affecting uptake of vaccines and potentially putting billions of people at risk,” the U.N. health agency said in a statement this month.

In June, the Serum Institute of India’s CEO, Adar Poonawalla, tweeted that he was concerned about vaccinated Indians facing problems traveling to the EU and said he was raising the problem at the highest levels with regulators and countries.

Stefan De Keersmaeker, a spokesman for the EU’s executive arm, said last week that regulators were obligated to check the production process at the Indian factory.

“We are not trying to create any doubts about this vaccine,” he said.

AstraZeneca said it only recently submitted the paperwork on the Indian factory to the EU drug regulatory agency. It didn’t say why it didn’t do so earlier, before the agency made its original decision in January.

The refusal of some national authorities to recognize vaccines manufactured outside the EU is also frustrating some Europeans immunized elsewhere, including the U.S.

Gerard Araud, a former French ambassador to Israel, the U.S. and the U.N., tweeted this week that France’s COVID-19 pass is a “disaster” for people vaccinated outside the country.

Public health experts warned that countries that decline to recognize vaccines backed by WHO are complicating global efforts to safely restart travel.

“You can’t just cut off countries from the rest of the world indefinitely,” said Dr. Raghib Ali of the University of Cambridge. “To exclude some people from certain countries because of the vaccine they’ve received is wholly inconsistent because we know that these approved vaccines are extremely protective.”

Nsofor said he and his wife are still deciding where to take their summer vacation and are leaning toward Singapore or East Africa.

“I didn’t realize there were so many layers to vaccine inequity,” he said.