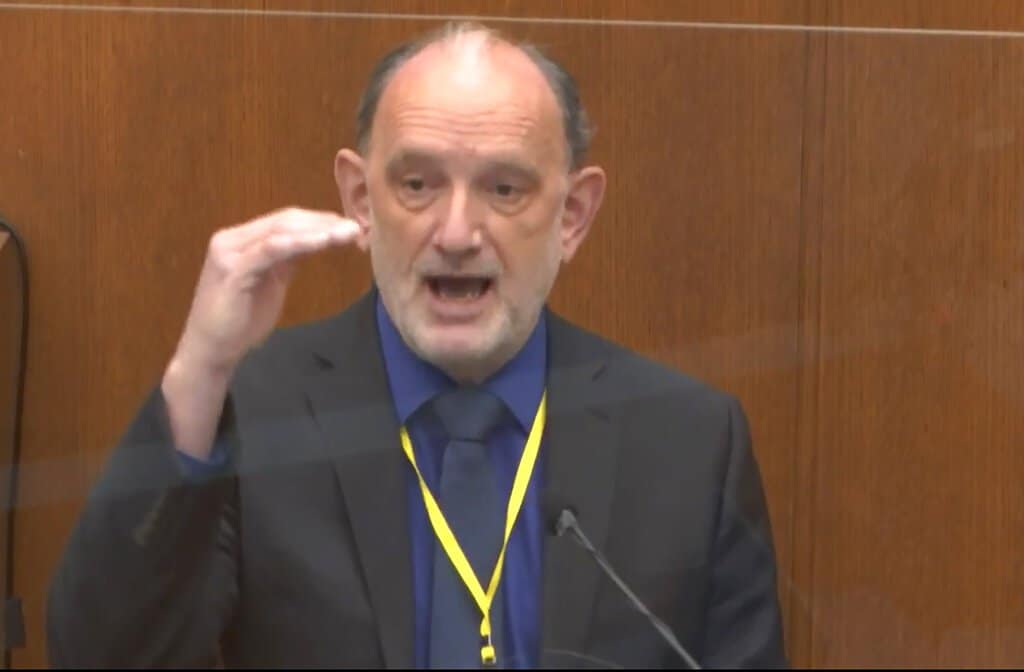 Defense expert Dr. David Fowler, a retired forensic pathologist, testified at the trial of former Minneapolis police officer Derek Chauvin that George Floyd died due to a sudden heart rhythm problem combined with other factors such as drugs in his system. The Associated Press has the story:

MINNEAPOLIS (AP) — George Floyd died of a sudden heart rhythm problem due to his heart disease while being restrained by police, a retired forensic pathologist testified for the defense Wednesday at former Officer Derek Chauvin’s murder trial, contradicting several experts who said Floyd succumbed to a lack of oxygen.

Dr. David Fowler, a former chief medical examiner for the state of Maryland and now a member of a consulting firm, said the fentanyl and methamphetamine in Floyd’s system, and possible carbon monoxide poisoning from auto exhaust, were contributing factors. He said Floyd’s heart disease included high blood pressure and narrowing of the arteries.

“All of those combined to cause Mr. Floyd’s death,” he said on the second day of the defense case.

Chauvin attorney Eric Nelson is trying to prove that the 19-year Minneapolis police veteran did what he was trained to do and that Floyd died because of his illegal drug use and underlying health problems.

Prosecutors say Floyd died because Chauvin’s knee was pressed against Floyd’s neck or neck area for 9 1/2 minutes as the 46-year-old Black man lay pinned to the pavement on his stomach last May, his hands cuffed behind his back.

Nelson asked Fowler about Floyd’s narrowed arteries, enlarged heart, use of methamphetamine, the stress of the situation he was in, his high blood pressure and other factors. Fowler said all of them could have caused Floyd’s heart to work harder and led it to suddenly stop.

Previous witnesses have noted that a sudden heart rhythm problem does not necessarily produce visible signs on autopsy but can be inferred from circumstances such as a victim suddenly clutching one’s chest and collapsing.

Nelson questioned Fowler extensively about carbon monoxide, which displaces oxygen in the bloodstream of people who breathe it in. Fowler said it could have contributed to oxygen depletion in Floyd, noting that he was facing the tailpipe end of a vehicle. But there is no way to know for sure because, he acknowledged, Floyd’s blood was never tested for carbon monoxide.

Nelson similarly tried to introduce another possible explanation on Tuesday when he raised questions about excited delirium, or what a witness described as a potentially lethal condition that can include agitation, incoherent speech and extraordinary strength.

Several top Minneapolis police officials, including the police chief, have testified that Chauvin used excessive force and violated his training. And a number of medical experts called by prosecutors have said Floyd died from a lack of oxygen because the way he was restrained restricted his breathing.

Fowler said the prone position alone does not affect a person’s ability to breathe — testimony that contradicts other witnesses who said the position Floyd was in, with his hands cuffed behind his back, was inherently dangerous.

Expert: Chauvin’s knee on Floyd was ‘nowhere close to his airway’

And he said Floyd that did not complain of visual changes or other symptoms consistent with hypoxia, or insufficient oxygen to the brain, and that he was coherent until shortly before he suddenly stopped moving.

“The bottom line is, moving air in and out, and speaking and making noise is very good evidence that the airway was not closed,” Fowler said.

Fowler handled a case similar to Floyd’s in Maryland in 2018, when a 19-year-old Black man, Anton Black, died after three officers and a civilian pinned him for more than five minutes as they handcuffed him and shackled his legs.

The family brought a federal lawsuit that included Fowler, whose autopsy found that the stress of the struggle probably contributed to Black’s death but found no evidence that restraint directly caused it. It also found no evidence of asphyxia.

Chauvin, a 45-year-old white man, is on trial on charges of murder and manslaughter in Floyd’s death after his arrest on suspicion of passing a counterfeit $20 at a neighborhood market. The video of his slow-motion death as he gasped that he couldn’t breathe touched off worldwide protests, violence and a furious examination of racism and policing in the U.S.

The defense hasn’t said whether Chauvin will take the stand.

Testifying could open him up to devastating cross-examination, with prosecutors replaying the video and forcing Chauvin, one freeze-frame moment at a time, to explain why he kept pressing down on Floyd.

But taking the stand could also give the jury the opportunity to see and hear any remorse or sympathy Chauvin might feel. He would be able to take off the COVID-19 mask that he has to wear while seated at the defense table.

The only time Chauvin has been heard publicly defending himself was when the jury listened to body-camera footage from the scene. After an ambulance had taken Floyd away, Chauvin told a bystander: “We gotta control this guy ’cause he’s a sizable guy … and it looks like he’s probably on something.”

Earlier Wednesday, Judge Peter Cahill turned down a defense request to acquit Chauvin, rejecting claims that prosecutors failed to prove Chauvin’s actions killed Floyd. Requests for an acquittal are routinely made midway through a trial and are usually denied.

The defense began its case on Tuesday with Nelson going straight to the question at the center of the trial — whether Chauvin’s actions were reasonable.

Police officers are allowed certain latitude to use force. Legal experts say a key issue for the jury will be whether the officer’s actions were reasonable in those specific circumstances.

A use-of-force expert for the defense, Barry Brodd, testified Tuesday that Chauvin was justified in keeping Floyd pinned to the pavement, saying Floyd kept on struggling.

Brodd, a former Santa Rosa, California, police officer, also said the bystanders yelling at police to get off Floyd complicated the situation for Chauvin and the others by causing them to wonder whether the crowd was becoming a threat, too.