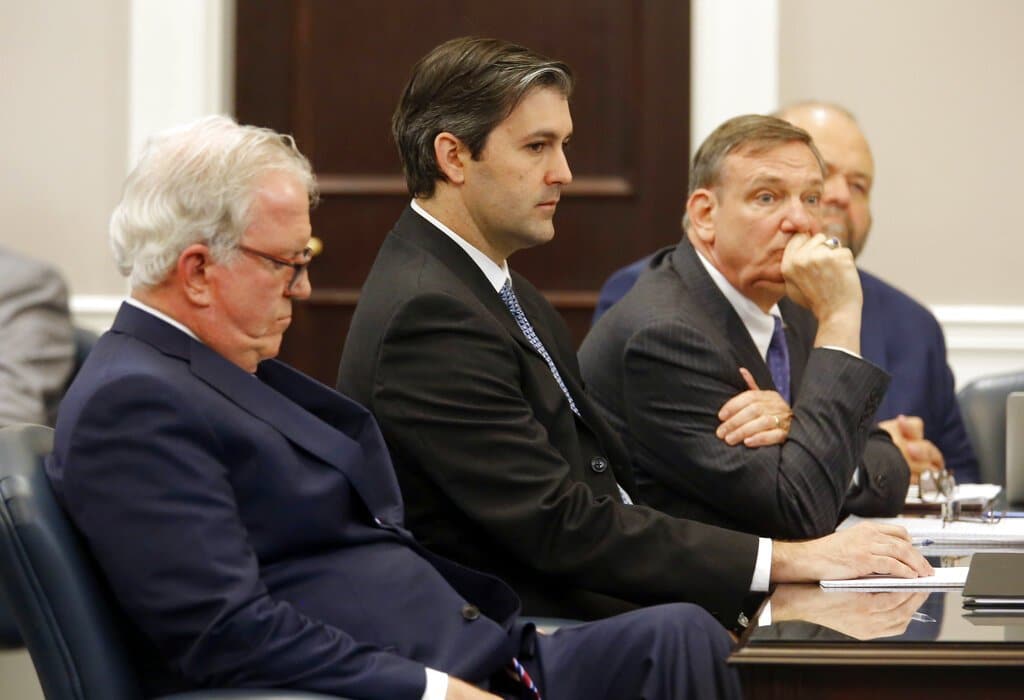 After finding out his attorney never told him about a potential plea deal, a former South Carolina police officer sentenced to 20 years in prison for killing a black man is appealing his sentence. Attorney Andy Savage admitted he never told Michael Slager about the plea deal because it was worse than what he thought the judge was going to give him. The Associated Press has the story:

COLUMBIA, S.C. (AP) — A white former police officer serving 20 years in prison for killing an unarmed Black man in South Carolina who ran from a traffic stop said his lawyer never told him about a plea offer from prosecutors that could have cut years off his sentence.

Former North Charleston police officer Michael Slager is requesting a new sentence in federal court this week, saying he would have taken the deal and that his lawyer was grossly incompetent for not telling him about it.

Andy Savage is one of South Carolina’s most accomplished attorneys and at the time was also representing a Black church member whose life was spared in a racist massacre that killed nine people in a Charleston church in 2015, two months after Slager’s arrest.

Prosecutors said Savage’s mistake didn’t rise above the very high bar of tossing out Slager’s sentence and added that the attorney’s defense was excellent in almost every other way. Slager’s sentence is one of the longest given for an on-duty shooting in recent years.

Slager pleaded guilty to a federal civil rights charge in 2017 for shooting Walter Scott in the back five times on April 4, 2015. Slager had pulled over the 50-year-old Black motorist for a broken brake light when their confrontation was captured on a bystander’s cellphone video that later spread worldwide on social media.

In the encounter, the two could be seen tumbling to the ground after Slager hit Scott with a Taser. Authorities said their investigation found Scott got back up and was shot five times in the back from a distance of about 15 feet (5 meters) as he ran from the officer.

The shooting itself was captured on video, something Slager didn’t know when he initially told investigators that Scott had charged at him after stealing his Taser.

Slager’s new lawyers aren’t questioning his guilt, just a sentence that according to federal prison records will keep him behind bars until 2033.

The two-day virtual federal appeals hearing that started Monday focuses on Slager’s former attorney Andy Savage and whether he did his job on a defense that cost nearly $100,000 in taxpayer money.

While Slager pleaded guilty to a civil rights offense, the length of his sentence depended on how federal judge David Norton interpreted the shooting. If it was voluntary manslaughter committed in the heat of passion, sentencing guidelines meant Slager might have faced as little as seven years.

But Norton ruled the shooting amounted to second-degree murder because Slager fired nine shots total and lied about Scott stealing his Taser.

Savage said in court papers he did not tell Slager about the potential plea deal offered eight months before because of a conversation he had with federal judge David Norton during a private meeting about public funding for Slager’s defense where the judge said this “is not a murder case.”

Savage took it to believe Norton was going to rule it was a manslaughter case where the upper end of the sentencing guidelines were eight years in prison, nearly four years less than the lower end of the prosecution’s offer. He recommended Slager plead guilty without the deal.

Savage never asked Norton for clarity. In court papers in Slager’s appeal, Norton said he was discussing Slager’s state trial on murder charges which had already taken place and ended in a mistrial.

Slager said he first heard about the prosecution’s plea deal when Savage visited him in the federal prison in Colorado where he is serving his sentence.

Slager’s state murder charge was dropped as part of the federal plea deal. He could have faced life in prison if convicted of that charge.

Savage has been a lawyer since 1975. He is well known in Charleston for taking on some of the area’s toughest cases — a policeman charged in the death of a city jail inmate or a 17-year-old girl facing the death penalty in the slaying of a small-town police chief.

Savage testified Monday during the virtual hearing held by federal judge Richard Gergel, saying he gave the defense of Slager all he had and he thought Norton considered all the facts before handing down his sentence.

Savage said his regret was misreading the case. “I had misinterpreted signals that I received, one of which was from Judge Norton. I wanted Michael to get the best possible outcome, and he didn’t,” Savage said, according to The State newspaper’s coverage of Monday’s hearing.

Gergel told Savage that sometimes “people want to blame lawyers for outcomes, but lawyers are advocates, they are not magicians are they?”