France: Back to Masks, With Hospitalizations Up 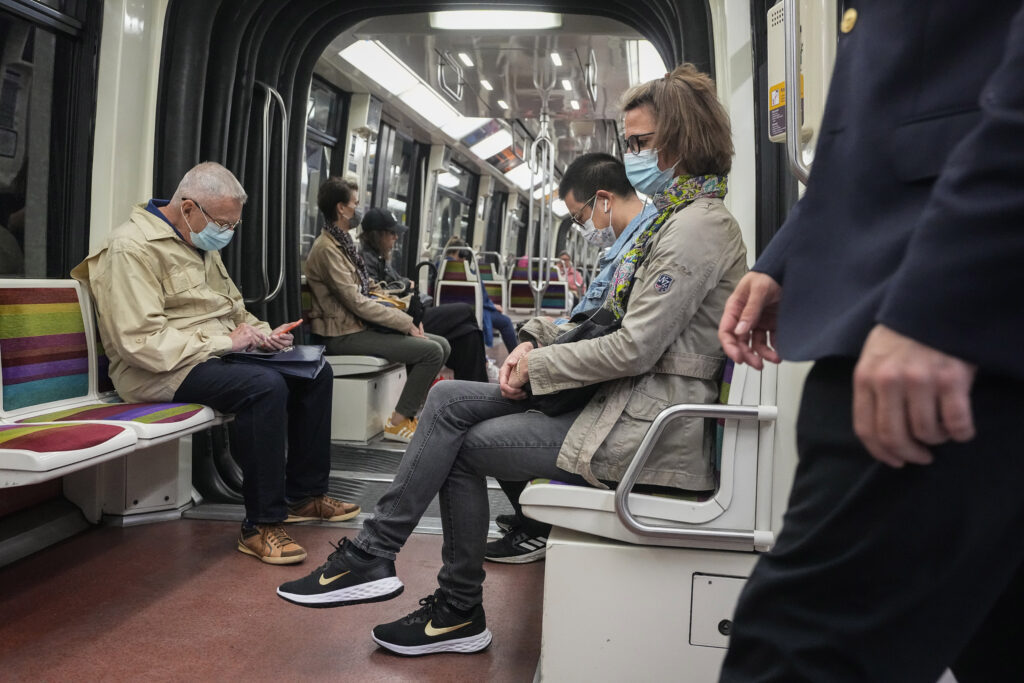 France: Back to Masks, With Hospitalizations Up

Tourism is booming again in France — and so is COVID-19. French officials have “invited” or “recommended” people to go back to using face masks but stopped short of renewing restrictions that would scare visitors away or revive antigovernment protests.

From Paris commuters to tourists on the French Riviera, many people seem to welcome the government’s light touch, while some worry that required prevention measures may be needed.

Virus-related hospitalizations rose quickly in France over the past two weeks, with nearly 1,000 patients with COVID-19 hospitalized per day, according to government data. Infections are also rising across Europe and the United States, but France has an exceptionally high proportion of people in the hospital, according to Our World in Data estimates.

French government spokesperson Olivia Gregoire has said there are no plans to reintroduce national regulations that limit or set conditions for gathering indoors and other activities.

“The French people are sick of restrictions,” she said Wednesday on channel BFMTV. “We are confident that people will behave responsibly.”

France’s parliamentary elections last month resulted in President Emmanuel Macron losing his majority in the national legislature, while parties on the far right and the far left that had protested his government’s earlier vaccine and mask rules gained seats.

After the prime minister this week recommended that people resume wearing masks on public transportation, commuter Raphaelle Vertaldi said, “We need to deal with the virus, but we can’t stop living because of it.”

Vertaldi, who was boarding a train in Boussy-Saint-Antoine south of Paris, said she opposed mandatory mask use but would cover her mouth and nose again, if the government requires it.

Hassani Mohammed, a postal worker in Paris, didn’t wait for the government to decide. He masks up before his daily commute. With his wife recovering from surgery and two children at home, he does not want to risk contracting the coronavirus a third time.

“I realized that the pandemic does not belong to the past,” Mohammed said.

Masks have been contentious in France. Early in the pandemic, the French government suggested masks weren’t helpful. It ultimately introduced some of Europe’s toughest restrictions, including an indoors and outside mask mandate that lasted more than a year, along with strict lockdowns.

A Paris court ruled Tuesday that the French government failed to sufficiently stock up on surgical masks at the start of the pandemic and to prevent the virus from spreading. The administrative court in Paris also ruled that the government was wrong to suggest early on that that masks did not protect people from becoming infected.

The government lifted most virus rules by April, and foreign tourists have returned by land, sea and air to French Mediterranean beaches, restaurants and bars.

In the meantime, French hospitals are struggling with long-running staff and funding shortages. Local officials are contemplating new measures, including an indoor mask mandate in some cities, but nothing that would curb economic activity.

French tourism professionals expect a booming summer season despite the virus, with numbers that may even surpass pre-pandemic levels as Americans benefit from the weaker euro and others rediscover foreign travel after more than two years of a more circumscribed existence.

On the French Riviera, a slow economic recovery began last summer. But with attendance at gatherings still capped, social distancing rules and travel restrictions in place a year ago, most visitors to the area were French.

A tour guide and electric bicycle taxi driver in Nice described her joy at seeing foreign visitors again. During France’s repeated lockdowns, she transported essential workers, and took people to hospitals, to care for elderly relatives or for PCR tests.

Now, passengers on her bike from the U.S., Australia, Germany, Italy or beyond reach for the hand disinfectant taped to the barrier between the passenger and driver’s seats. She said she still diligently disinfects the bike before each ride, “like it’s 2020.”

A retired couple from the U.K. visited France this week on their first trip abroad since pandemic travel restrictions were lifted. They started with a cruise down the River Rhône – face masks were mandatory on the ship – and ended with a few days on the Mediterranean.

“It’s been delightful from start to finish,” said Ros Runcie, who was in Nice with her husband, Gordon. “Everyone is so pleased to see you, everyone is really polite and nice to visitors.”

Sue Baker, who was traveling with her husband, Phil, and the Runcies, observed: “It feels very much like pre-2020.”

Asked about the possible return of French mask rules, Phil Baker said, “Masks are a bit uncomfortable, especially in the heat.”

But his wife added, “If it means we can still go on a holiday, we’ll put them back on without hesitation.”