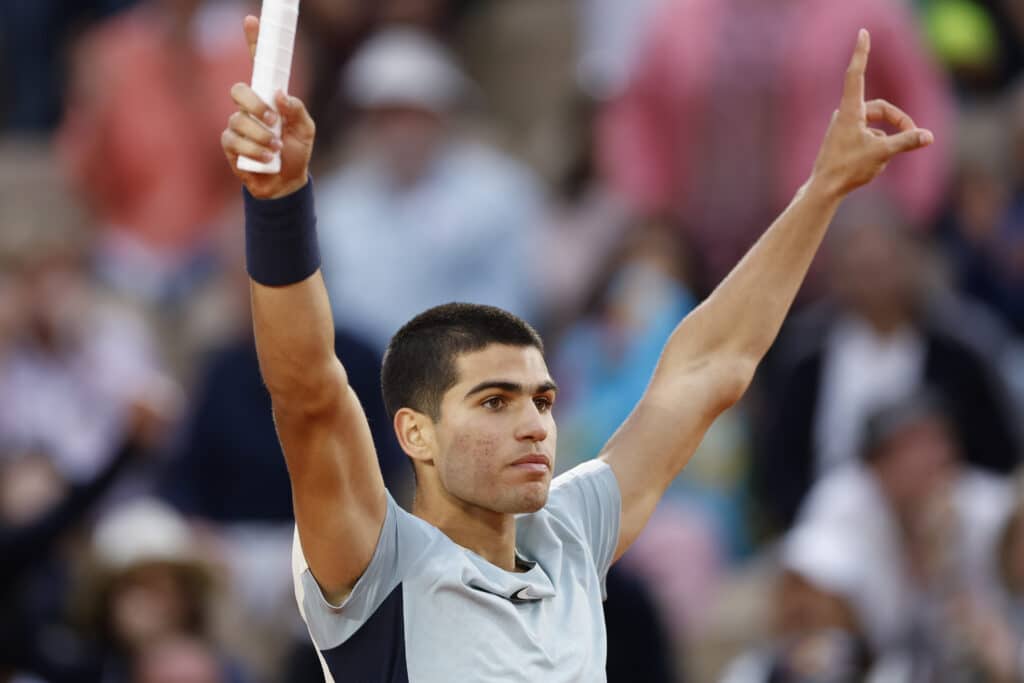 It was a riveting game, with 19-year-old Carlos Alcaraz looking like he was going to lose to a fellow Spaniard 15 years his senior, he saved a match point. His last down-the-line backhand passing shot foiled Albert Ramos-Vinolas, who slammed it into the net. The Associated Press has the story:

PARIS (AP) — This was the sort of point in the sort of contest that, if 19-year-old Carlos Alcaraz eventually reaches the heights so many believe he will, the lucky folks on hand at Court Simonne Mathieu on Wednesday night just might regale dinner guests for years with tales that begin, “We were there when … .”

Not, mind you, the match point Alcaraz saved in his second-round French Open marathon against Albert Ramos-Vinolas, a fellow Spaniard who is 15 years his elder. That one, necessary as it was, of course, to the eventual 6-1, 6-7 (7), 5-7, 7-6 (2), 6-4 outcome in the No. 6-seeded Alcaraz’s favor, was rather mundane: a three-stroke exchange that ended with Ramos-Vinolas pushing a nervous-looking forehand into the net while serving for the win at 5-4 in the fourth set.

No, instead, let’s examine what happened on a break point at 4-all in the fifth, with Alcaraz leading, Ramos-Vinolas serving, the crowd holding its breath and the stadium clock already reading 4 hours, 31 minutes. On the sixth of what would become 15 strokes, Alcaraz tried one of his feathery drop shots. Ramos-Vinolas got to it and responded by sending the ball off the baseline, forcing Alcaraz to race to his left to flick a no-look backhand lob.

Ramos-Vinolas replied with an overhead to that corner, sending Alcaraz well wide of the doubles alley for another defensive backhand lob. Vinolas-Ramos guided this one to the opposite corner, pushing Alcaraz to his forehand side, so he sprinted, then slid almost into the splits, to retrieve that one. Yet another lob produced yet another overhead, again back to Alcaraz’s left, and this time he came up with a down-the-line backhand passing shot that Ramos-Vinola volleyed into the net.

Some in the crowd were on their feet during that series of exchanges; all were by the end. Ramos-Vinola chucked his racket into the net. Alcaraz raised his arms and index fingers to the sky — a gesture for “No. 1,” a spot expected of him one day, perhaps soon — while in the stands, his coach, 2003 French Open champion Juan Carlos Ferrero, pointed to his temples.

Alcaraz wouldn’t cede another point. He had trailed by two sets to one. He had been a point from defeat. He had been down 3-0 in the fifth set. He made 74 unforced errors. He accumulated 31 break points but frittered away 23 of them. None of that mattered. On a day he was not at his best — never quite able to show off all of the shot-making that carried him to a tour-high four titles and a 30-3 record in 2022, and that earlier this month made him the first player ever to beat Rafael Nadal and Novak Djokovic at the same clay-court tournament — he thought and hustled his way through the finish line.

“At the end of the third set, I thought I was going to lose,” Alcaraz said. “I knew I had to change something or I would lose.”

The day also included a straight-set victory for defending champion Djokovic and a comeback for No. 3 seed Alexander Zverev from a two-set hole, while 13-time champion Nadal needed to wait for the night session to get on court.

Most attention, however, was on Alcaraz, just as it has been for much of 2022 as everyone searches for the Next Big Thing to supplant the Big Three in men’s tennis.

The guy some call “Carlitos” — and who refers to himself as “Charlie” — is skilled. He is tenacious. He is young; in April, in fact, he became the youngest man to break into the top 10 of the ATP rankings since Nadal did it in 2005.

This is just the sixth Grand Slam tournament for Alcaraz, whose best showing was the U.S. Open quarterfinals last September. It was the 42nd Slam for the 44th-ranked Ramos-Vinolas, who also has one quarterfinal appearance to his name.

Alcaraz improved to 18-1 on clay this season, another reason his name is in the discussion, along with Djokovic’s and Nadal’s chiefly, about who could leave Roland Garros with the title. That lone loss came at the Monte Carlo Masters last month against Korda — who happens to be Alcaraz’s next opponent.

Alcaraz said he will re-watch that match to see how to try to reverse the result. Good as he might already be, his oft-stated desire to keep improving bodes well for what might come down the road.

He called the back-and-forth struggle against Ramos-Vinolas “a lesson.”