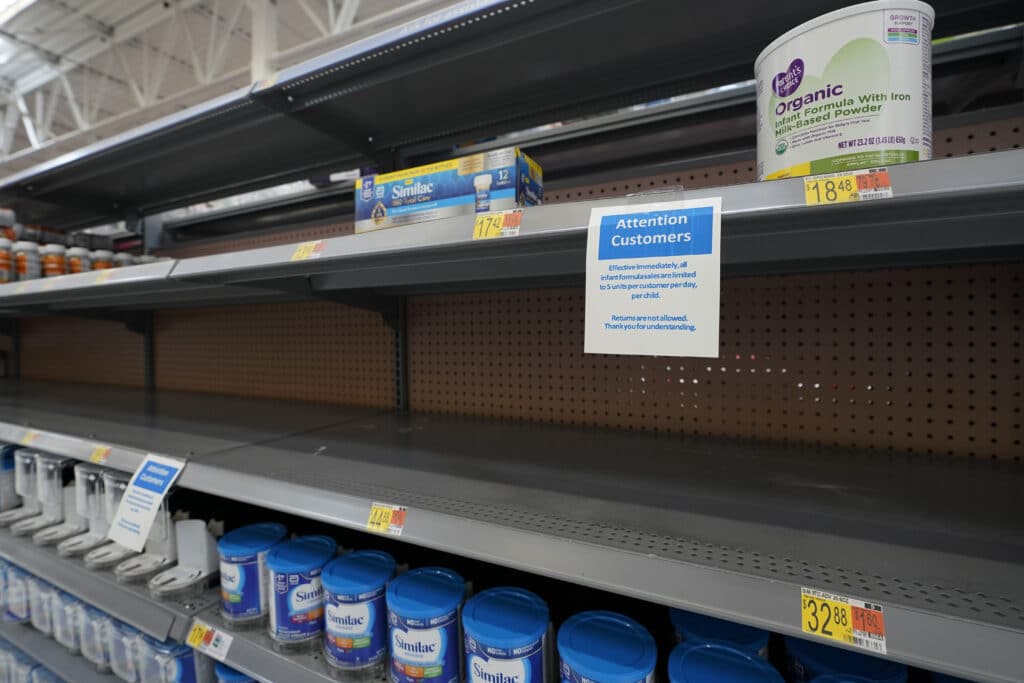 Regulators are taking a look at the rules and laws in place governing the production of baby formula, to try and figure out what went wrong and how to avoid a similar situation in the future. Part of the problem is decades-old policies have allowed a handful of companies to corner the market. The Associated Press has the story:

WASHINGTON (AP) — A massive recall is getting most of the blame for the U.S. baby formula shortage, but experts say the products have long been vulnerable to this type of crisis due to decades-old policies that have allowed a handful of companies to corner the market.

“There’s perfectly good and safe baby formula available around the world. We just don’t have access to it,” said Bindiya Vakil, CEO of Resilinc, a supply chain analytics firm. ”We’ve created this problem by not setting up an infrastructure for imports.”

Federal regulators are expected to soon allow Abbott Nutrition to reopen the Michigan plant that’s been closed since February due to contamination problems. The factory is the largest of its kind in the U.S. and its shutdown — combined with pandemic-related supply chain problems — hobbled supplies of popular formulas and specialty formulas for children with rare medical conditions.

Lawmakers will hold three hearings on the issue this week, calling on company executives, government regulators and outside experts to testify. The attention could spur changes to government safety and contracting rules that have been in place since the 1980s and favor big U.S. manufacturers that are capable of navigating the complex requirements.

Baby formula is one of the few American products essentially unaffected by globalization, with 98% of the supply manufactured domestically. Four companies account for roughly 90% of the market: Abbott, Reckitt, Nestle and Perrigo, according to industry figures. That consolidation mirrors similar trends across the food industry.

Beginning in 1980, Congress gave the FDA authority to rigorously enforce the nutritional content of all formula sold in the U.S., imposing extra research and manufacturing standards that have few equivalents worldwide. The changes came after some babies were sickened by deficient formulas in the 1970s.

Companies must consult with the FDA before selling a new formula, altering ingredients in an existing one or making major manufacturing changes. The result is only the biggest manufacturers have plants and procedures that comply with federal rules. And would-be competitors have little incentive to enter the field, given the declining U.S. birth rate.

“You have to have a lot of expertise, a lot of resources and a lot of research dollars,” White said.

There are other hurdles for foreign manufacturers looking to compete. The U.S. has long imposed tariffs and quotas on dairy imports from abroad, including Canada, in order to shield American milk producers from competition.

Responding to political pressure, the Biden administration has begun airlifting shipments of formula from Europe. The FDA is also waiving some requirements to encourage more imports from overseas manufacturers that are expected to boost supplies in coming weeks.

The biggest driver of the U.S. market, by far, is a massive federal nutrition program that provides formula and other foods to lower-income women and children. The WIC program accounts for more than 50% of the U.S. market, providing formula for more than 1.2 million babies, according to the National WIC Association, which represents state and local administrators who run the benefit.

Beginning in 1989, federal law has required states to award contracts to a single formula company, based on whichever one can offer the biggest discounts.

The effect is that contract winners quickly squeeze out much of the competition on store shelves. Today, all 50 WIC contracts are held by three companies: Abbott, Reckitt and Nestle, according to the association. Abbott is the leader, with 34 state contracts.

The competitive effects of these sole-source contracts have been researched for years. A 2011 study by the U.S. Department of Agriculture found that whichever company wins a state’s WIC contract typically sees their market share grow by 74%, on average, as WIC recipients switch to their brand.

But not everyone supports overhauling the system. Brian Dittmeier of the National WIC Association says doing away with sole-source contracts would jeopardize the savings that allow the plan to serve so many Americans. Instead he says manufacturers should be held accountable for not investing in their own capacity.

“This is a manufacturing failure,” Dittmeier said. “The fact is there just is not enough product to fulfill the demand that manufacturers have drummed up over the years.” His group supports calls by some lawmakers for a federal antitrust investigation into the industry.

WIC contracts are generally rebid every four years and market share swings back and forth between the handful of players who compete.

Dr. Steven Abrams, a pediatrician at the University of Texas at Austin, says Congress should revisit the WIC program.

“We need to take a comprehensive look at where the failures happened and where we can fix them” said Abrams. “We need to consider whether we really want to have a situation where there’s that much dominance in the program.”

Previous Article
After 3 months, it’s a war of attrition in Ukraine
Next Article
Ahmad Al-Yassin, When hard work turns into a success story