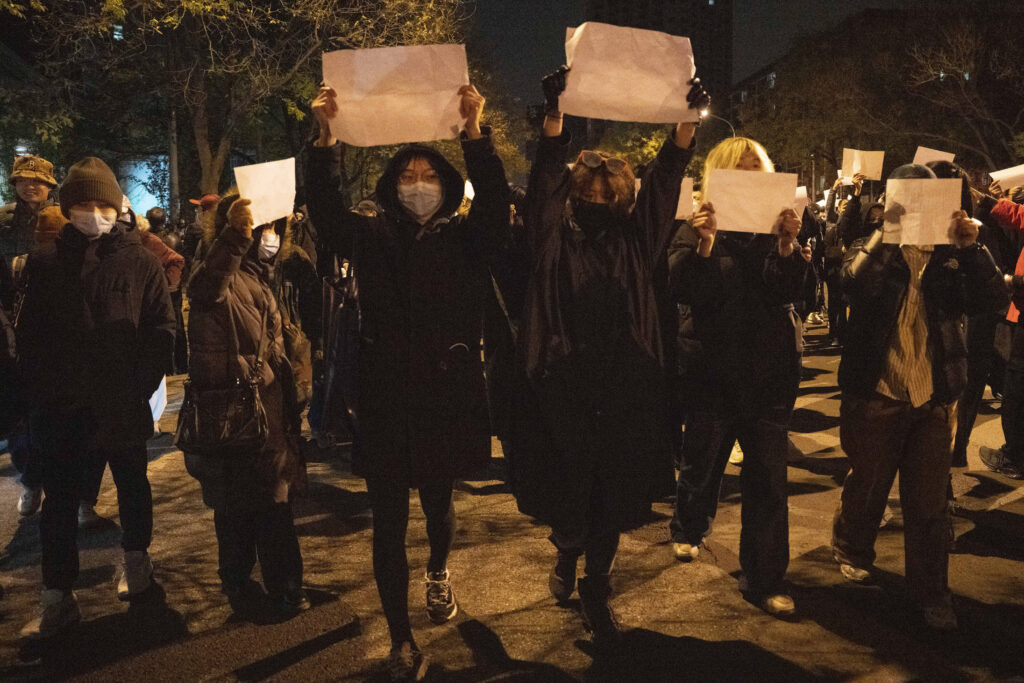 Some in Hong Kong, a former British colony on China’s southern coast, sympathize with mainland protesters’ calls for greater freedoms after nearly three years of onerous pandemic restrictions. Not all in Hong Kong sympathized with the recent bout of unrest, just as many disapproved of earlier mass protests in their own city. The Associated Press has the story:

The recent wave of protests against China’s anti-virus restrictions was a ray of hope for some supporters of Hong Kong’s own pro-democracy movement after local authorities stifled it using a national security law enacted in 2020.

Thomas So, who joined about a dozen students from the Chinese mainland staging a rare protest this week at the University of Hong Kong, is among them.

“If mainland China falls apart, I wouldn’t say it’s none of my business,” said So, who held up an electric candle and a blank sheet of paper symbolizing defiance against censorship at the protest. “When I support the values of democracy and freedom, I hope China will have these too.”

So hopes that in reopening a window for people to gather and have their voices heard, the protests might auger a fresh chance for Hong Kong’s languishing pro-democracy movement.

“Hong Kong had a lot of protests before and we understand how it feels to want to say something but not be able to because of the government,” said 23-year-old Kris Tam, who was holding up a blank sheet of paper.

In 2019, before the pandemic, hundreds of thousands of Hong Kongers took to the streets to protest proposed extradition legislation. Although the bill was eventually shelved, it sparked months of unrest that at times led to violent clashes between police and protesters.

Under the National Security Law, enacted with backing from China’s ruling Communist Party, authorities have cracked down on most public shows of dissent in the city, despite Beijing’s pledge to leave semi-autonomous Hong Kong’s Western-style legal system and civil liberties intact for 50 years after the city passed into Chinese control in 1997.

But rarely seen demonstrations erupted in many Chinese cities after a Nov. 24 fire in an apartment building in the northwestern city of Urumqi killed at least 10 people. The tragedy set off angry questions online about whether firefighters or victims trying to escape were blocked by locked doors or other anti-virus controls. Authorities denied that, but the deaths became a focus of public frustration.

It was the boldest display of public dissent in decades. After an initially muted response, with security personnel using pepper spray and tear gas, police and paramilitary troops flooded city streets with jeeps, vans and armored cars in a massive show of force.

Beijing has promised to reduce the cost and disruptions of controls. But it has said it will stick with the “zero-COVID” strategy of trying to snuff outbreaks by isolating every case.

Hong Kong authorities also have trodden lightly in handling the protests led by mainland Chinese. Police stood by a protest Monday in the downtown Central district, cordoning off an area and allowing people to put down flowers, candles and blank pieces of paper to commemorate the victims of the Urumqi fire. However, the officers also took down personal details of several protesters, and took videos of the protest.

Also Monday, dozens of Chinese students and Hong Kongers joined a protest at the Chinese University of Hong Kong in the suburban area of Shatin, with most holding up blank sheets of paper to avoid identification by the authorities.

They chanted “No PCR tests but freedom!” and “Oppose dictatorship, don’t be slaves,” and sang songs favored in earlier protests, like “Do You Hear the People Sing?” from the musical “Les Miserables” and “Boundless Oceans, Vast Skies” by Beyond, a Canto-pop rock band.

It’s unclear if the authorities might take further action.

Some have resented criticism from mainland Chinese of Hong Kong’s earlier protest movement and say the protesters across the border are just getting a taste of their own medicine.

Some said Hong Kong police ought to go help mainland authorities crack down on the protests. Others even said the Chinese government should deploy tanks, as it did in crushing the 1989 pro-democracy movement centered on Tiananmen Square, killing hundreds and possibly thousands of unarmed protesters.

It’s impossible to know what proportion of Hong Kong’s 7.4 million residents support or disapprove of protests both in their own city and on the Chinese mainland.

“Those on the street in Hong Kong may be a mix of mainlanders and locals, seeking to express their disapproval of China’s zero-COVID policies as implemented on the ground, and perhaps advocating more freedom and democracy in both places,” said John Burns, an honorary professor of politics and public administration at the University of Hong Kong.

Protesters from both the mainland and Hong Kong support the same cause, said Charles Leung, a student in his 20s who joined the event in Central on Monday.

“As a human being, when I see others being treated unfairly, I should speak up,” Leung said. “When it comes to human rights … (we should care) regardless of whether it’s Hong Kong three years ago, or China today.”