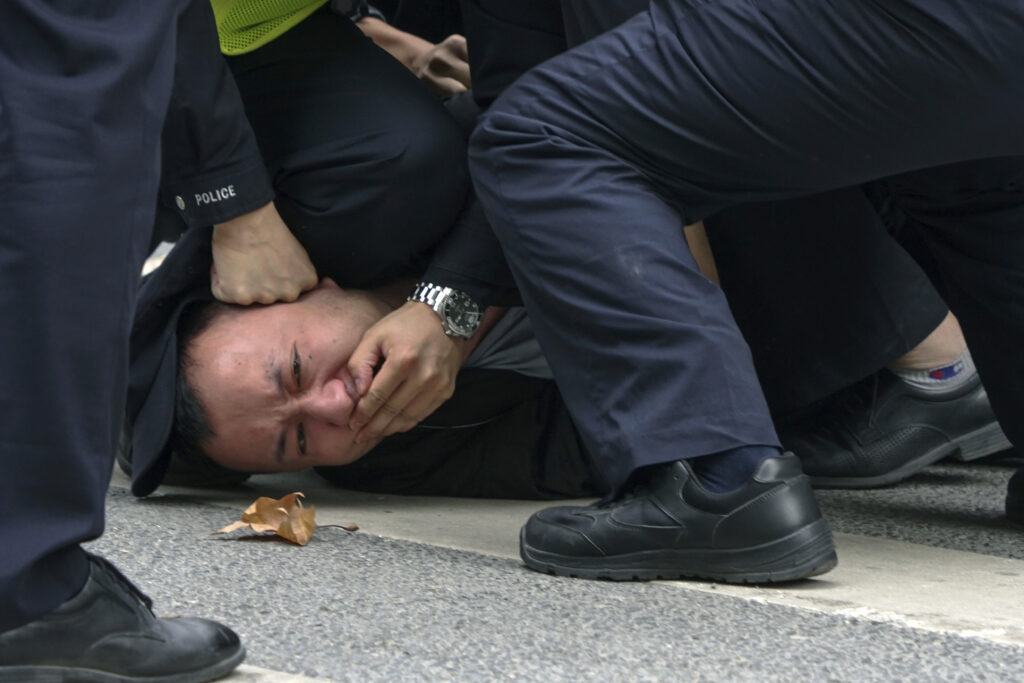 Police turned out to discourage Protesters who oppose Zero-COVID policies of China. Gatherings in Beijing, Shanghai and Hong Kong spread as state-media backs Xi Jinping’s approach to pandemic. Some protesters chanted for free speech, democracy, the rule of law, human rights, and other political demands across cities from the eastern financial hub of Shanghai to the capital Beijing, the southern metropolis of Guangzhou and Chengdu in the west. The Associated Press has the story:

For the first time in decades, thousands of people have defied Chinese authorities to protest at universities and on the streets of major cities, demanding to be freed not only from incessant Covid tests and lockdowns, but strict censorship and the Communist Party’s tightening grip over all aspects of life.

Across the country, “want freedom” has become a rallying cry for a groundswell of protests mainly led by the younger generation, some too young to have taken part in previous acts of open dissent against the government.

“Give me liberty or give me death!” crowds by the hundreds shouted in several cities, according to videos circulating online,as vigils to mark the deaths of at least 10 people in a fire in Xinjiang spiraled into political rallies.

The government made no comment on the protests or the criticism of Xi, but the decision to ease at least some of the restrictions appeared to be aimed at quelling anger. Still, analysts don’t expect the government to back down on its COVID strategy and note authorities are adept at stifling dissent.

It wasn’t clear how many people were detained since protests began Friday and spread to cities including Shanghai, the country’s financial center, and the capital, Beijing.

The city government of Beijing announced Monday it would no longer set up gates to block access to apartment compounds where infections are found. It made no mention of a deadly fire last week that set off the protests following questions about whether firefighters or victims trying to escape were blocked by locked doors or other anti-virus controls.

“Passages must remain clear for medical transportation, emergency escapes and rescues,” said a city official in charge of epidemic control, Wang Daguang, according to the official China News Service.

In addition, the southern manufacturing and trade metropolis of Guangzhou, the biggest hotspot in China’s latest wave of infections, announced some residents will no longer be required to undergo mass testing. It cited a need to conserve resources.

Urumqi, where the deadly fire occurred, and another city in the Xinjiang region in the northwest announced markets and other businesses in areas deemed at low risk of infection would reopen this week and public bus service would resume.

“Zero COVID,” which aims to isolate every infected person, has helped to keep China’s case numbers lower than those of the United States and other major countries. But it has confined millions of people to their homes for up to four months, and some have complained about a lack of reliable food and medical supplies.

The ruling party promised last month to reduce disruption by changing quarantine and other rules. But public acceptance is wearing thin after a spike in infections prompted cities to tighten controls.

The ruling party newspaper People’s Daily called for its anti-virus strategy to be carried out effectively, indicating Xi’s government has no plans to change course.

“Facts have fully proved that each version of the prevention and control plan has withstood the test of practice,” a People’s Daily commentator wrote.

Protests spread to at least eight major cities. Most protesters complained about excessive restrictions, but some turned their anger at Xi, China’s most powerful leader since at least the 1980s. In a video that was verified by The Associated Press, a crowd in Shanghai on Saturday chanted, “Xi Jinping! Step down! CCP! Step down!”

Hours after police broke up the demonstration, people returned to the same spot on Sunday for another protest. Dozens of people were detained in police sweeps and driven away in police vans and buses, though the exact number was not clear.

In one sweep witnessed by an AP journalist, officers charged and tackled bystanders at an intersection near where earlier protests had taken place, even though the bystanders were not chanting or expressing dissent in any visible way.

The British Broadcasting Corp. said one of its reporters was beaten, kicked, handcuffed and detained for several hours by Shanghai police but later released.

The BBC criticized what it said was Chinese authorities’ explanation that its reporter was detained to prevent him from contracting the coronavirus from the crowd. “We do not consider this a credible explanation,” the broadcaster said in a statement.

Swiss broadcaster RTS said its correspondent and a cameraman were detained while doing a live broadcast but released a few minutes later. A journalist for The Associated Press was detained but later released.

Eyewitnesses told the AP about protests that took place in Guangzhou and in Chengdu in the southwest. Videos that said they were filmed in Nanjing in the east, Chongqing in the southwest and other cities showed protesters tussling with police in white protective suits or dismantling barricades used to seal off neighborhoods. AP could not verify that all those protests took place or where.